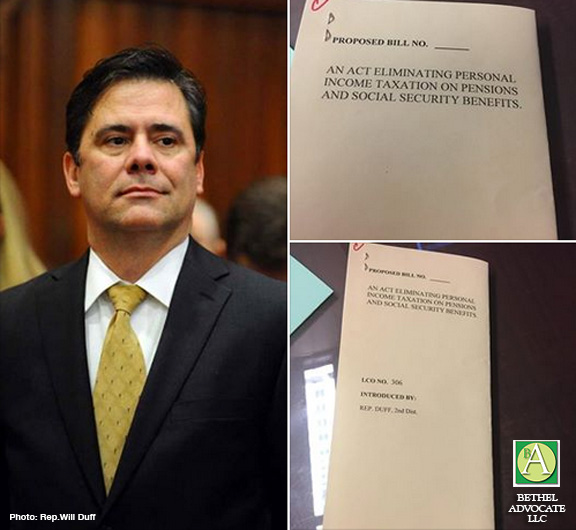 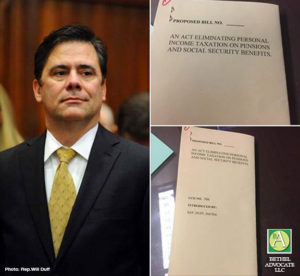 Photo: Will Duff was sworn in Wednesday as state representative for the 2nd  General Assembly District covering Bethel, Danbury, Redding and Newtown.  Also shown is a bill to reduce income tax on pensions and social security, with Duff’s signature.

January 5, 2016 – HARTFORD—Bethel’s Will Duff, was sworn in Wednesday as state representative for the 2nd  General Assembly District covering Bethel, Danbury, Redding and Newtown. 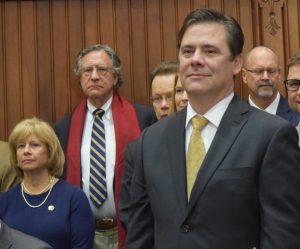 Duff was among 20 freshman House Republican legislators who pledged to serve their districts over a two-year term. Fueled by his back-to-basics approach to government, Duff ran with the support of the man he replaced—retiring Representative Dan Carter.

Duff will serve on the legislature’s Energy & Technology Committee—a panel that deals with subjects such as energy planning and activities. He is also a member of the Higher Education & Employments Advancement and Banks committees.

Bethel resident Duff has stayed busy since Election Day, meeting with residents in the communities he now serves, and he is already planning in-district events such as constituent office hours and district business tours.

“I’m honored the faith the voters placed in my abilities to make an impact in Hartford, and I’ll take that responsibility seriously during the course of the next two years,” said Duff.

Duff encourages residents who have questions, ideas, or concerns about issues related to state government to contact his office at either 800-842-1423 or Will.Duff@housegop.ct.gov, or through repduff.com.