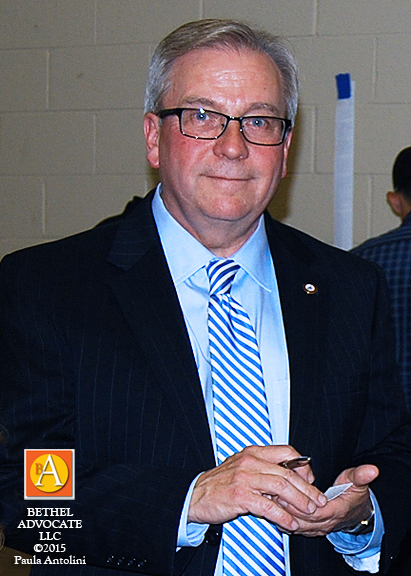 In a battle that covered topics ranging from taxes to snow plowing, Matt Knickerbocker (D) won his fourth term as First Selectman of Bethel, CT, against challenger Will Duff (R), in a slim margin of 2,327 votes to 2,002, according to unofficial results of this rematch election. 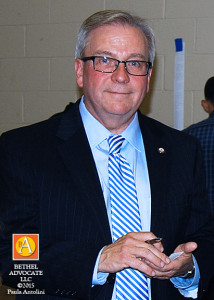 In a battle that covered topics ranging from taxes to snow plowing, Matt Knickerbocker (D) won his fourth term as First Selectman of Bethel, CT, against challenger Will Duff (R), in a slim margin of 2,327 votes to 2,002, according to unofficial results of this rematch election.  Bethel Selectman incumbents Richard Straiton (D) and Paul Szatkowski (R) were both re-elected to the Bethel Board of Selectmen with 2,183 and 2,066 votes respectively. 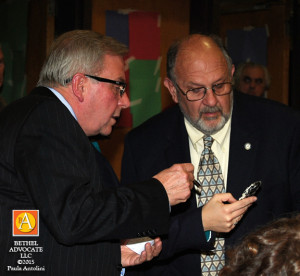 Will Duff graciously conceded the election by walking over to Matt Knickerbocker and shaking his hand to congratulate him even before all votes were officially tallied and verified.  Duff’s comment about the election afterwards was, “Well, one thing to remember, when the archer misses his target, he turns it on himself, and not the bow.” 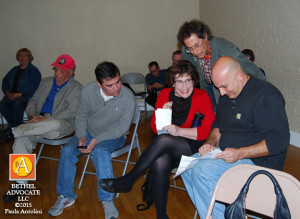 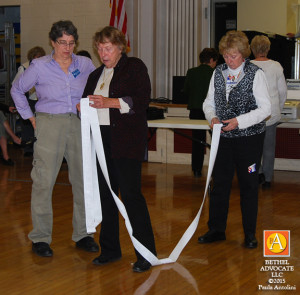 Bethel Advocate asked First Selectman Knickerbocker what he thought the strongest reason was, why voters selected him.  He said, “I think mostly because of my record, number one, and number two, is the vision of the future I put forth.”  He added, “One of the things that I really noticed was in the Bethel Forward meetings, when people were voting with the little electronic things, one of the things that came up repeatedly was pedestrian safety and sidewalks and that was something that I wrote several months ago in the vision statement and I was very pleased to see that.  So I think I’ve listened to the voters very well and I’m going in the right direction.”  The last Bethel Forward meeting took place on October 29, 2015 where attendees used wireless electronic keypads to submit their answers on a number of topics in a survey, moving towards a master revitalization plan for Bethel involving over 200 acres in the Transit Oriented Development (TOD) project in an area surrounding the Bethel railroad station and beyond, in which the town received a grant to do the study recently. 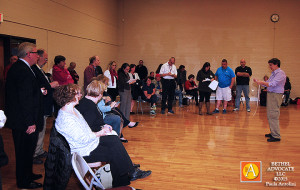 One of the hot topics during the campaign to become Bethel First Selectman was how to reduce too-high taxes, so when Bethel Advocate asked Knickerbocker, “Do you have a plan to freeze, or not increase, taxes for the next budget?”  he replied, “You know, there was an awful lot of misconception going on about that because the First Selectman doesn’t get to do that.  That is up to the Board of Finance and really to the people of Bethel.  We have a town meeting form of government.  The First Selectman, out of all the people who participate in that increase in budget, has the least amount of influence.  We, as a town, vote on that budget and that’s what determines the taxes, so, I know there was an awful lot of accusations about that, that’s what we would call a red herring.” 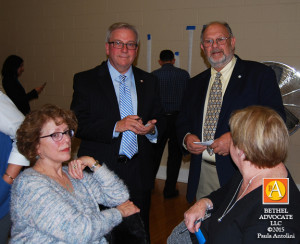 We asked First Selectman Knickerbocker if the Bethel Forward project was the most exciting project on the horizon and he said, “Not really for me.  I support that project but that’s really a Planning & Zoning issue.  The most exciting project for me, personally, is moving forward with pedestrian safety and linking our sidewalks, that, and economic development.”  He said that the Bethel Forward project was under a different grant than the one for sidewalks. “Whether or not Bethel Forward actually ever happens, I’m still going to build sidewalks with the $500,000 we have.”

Knickerbocker said he did not know when the Bethel Forward master plan would be complete or when anything in that plan would commence.  He said we need to ask the Planning & Zoning Commission about that, or Steve Palmer (Town Planner/Land use Director) or Janice Chrzescijanek (Director of Economic Development).  “That’s one of their internal processes.  I know they’re working on a plan of conservation and development that will be published and finalized in 2017,” Knickerbocker stated. 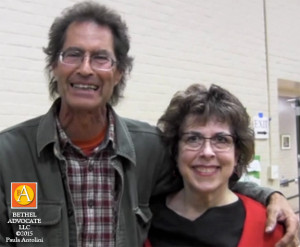 In an historical win, Cynthia McCorkindale, Chairman of the Bethel Action Committee (BAC), an activist group in Bethel, won a seat on the Bethel Board of Finance. The BAC is well known for their presence at budget meetings and also forming a protest rally regarding the proposed sale of Bethel’s Aquarion water company and Bethel land a few years ago, to name a few of their endeavors.  This is the first time a member (Chairman) of the BAC has officially become part of Bethel government. 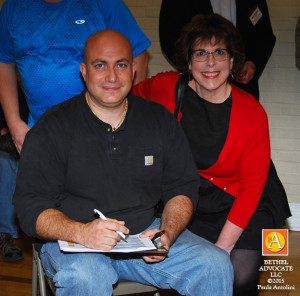 We don’t know who was more excited about the win, McCorkindale or Bethel resident and BAC member Billy Michael, who was beaming with a wide smile.  Michael said, “This is an historic moment, in that, after 30 years of taxpayer advocacy with the Bethel Action Committee, the Chairwoman of the BAC gets elected to the Board of Finance.  It’s earth shattering and it’s going to change a lot.  This is a big moment.”

We asked McCorkindale how she felt about this and she said, “I don’t know.  I’m still doing the math in my head when we have 100%, but it looks very likely, and if it is true then I’m very happy.  It’s just, you know, the people have spoken, basically, which is really great.”

Winners of the 2015 Municipal Election are:

See more photos below and check back for video tonight! 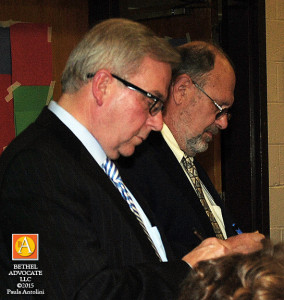 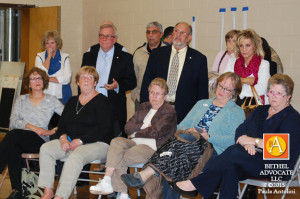 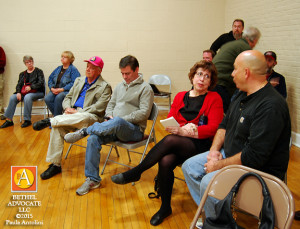 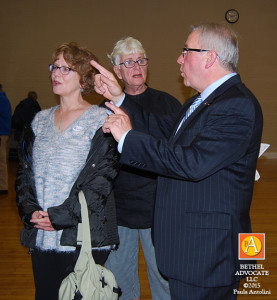 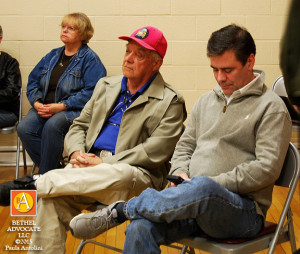 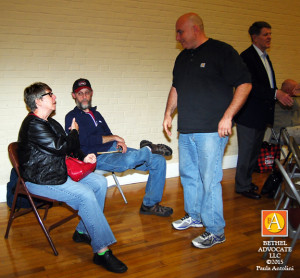 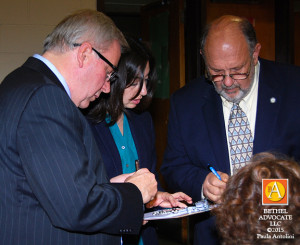 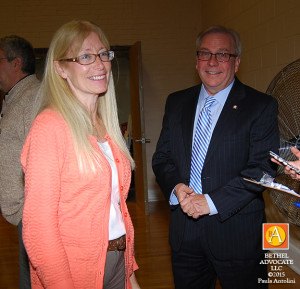 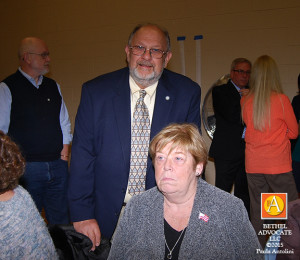 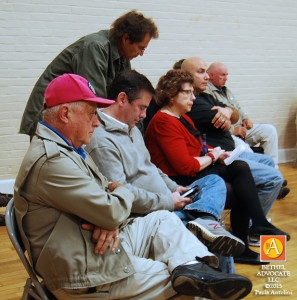 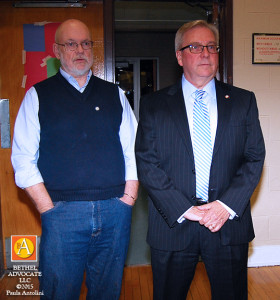 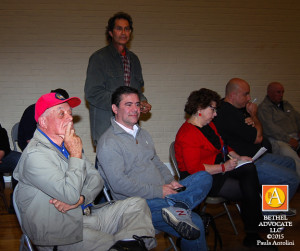 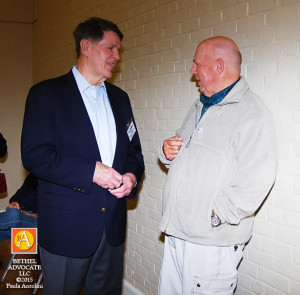 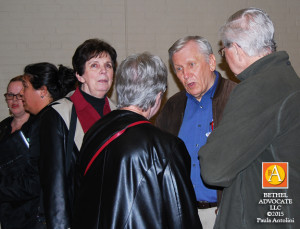 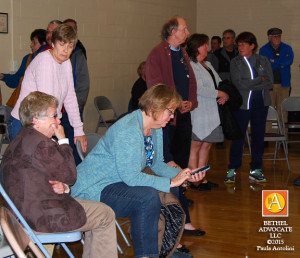