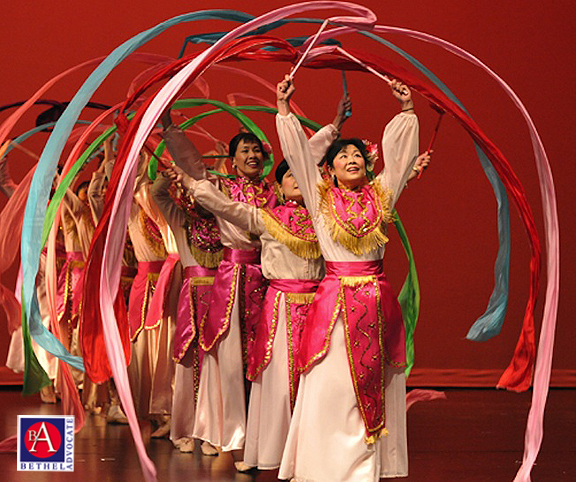 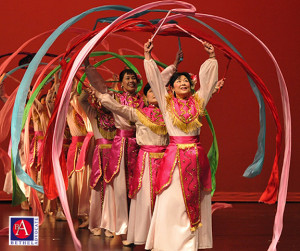 “…the power of gathering: it inspires us, delightfully, to be more hopeful, more joyful, more thoughtful: in a word, more alive” – author and activist Alice Waters

Danbury Mayor Mark Boughton is declaring “Diversity Week” in the City of Danbury on June 20th at a World of Colors concert, the largest gathering of culturally diverse music & dance performers ever to be presented on the CityCenter Danbury Green (at Ives Street). The event, hosted by Main Street’s new World Heritage Cultural Center, is a free multi-ethnic, multi-arts international celebration produced by WHCC’s founder and executive director Sattie Persaud, with over 20 countries to be represented on the stage. The array of entertainments, programmed throughout the day from 10:00am to 6:00pm, will be complemented by ethnic arts and crafts, and food from Kas’s Bar & Restaurant, Meat the Press, Lemon Grass Restaurant, and more.

Emcees include Fox TV reporter and anchor Kelly Wright, radio personality Cindy Vero, as well as actor/filmmakers Shetal Shah and Victor Cruz. Also, during the concert, World of Colors Global Appreciation Awards will be given to four leaders who “go the extra mile in doing good”: Alex Gonzalez-Davidson, a Spanish environmental activist currently overseeing the work of the Mother Nature organization in Cambodia; Jim Luce, Founder and President of the James Jay Dudley Luce Foundation, supporting young global leadership to impact positive social change; Delilah, the most-listened-to-woman on radio in North America, who founded Point Hope, a voice for forgotten children in West African villages and in foster care in the US: and Jim Ziolkowski, Founder, President and CEO of buildOn, engaging students in creating lasting change in their lives, their communities and their world, and the best-selling author of “Walk in Their Shoes”. 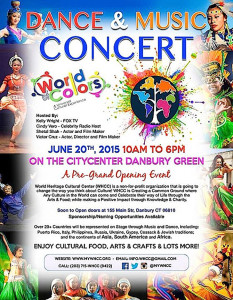 Mayor Boughton notes, “Having so many vibrant and diverse cultures in the City of Danbury is a source of great pride for our community.  By sharing our language, food, faith and arts, we are providing others with a sense of who we are.  By declaring ‘Diversity Week’ in the City of Danbury on June 20th, at the World of Colors Concert, we hope to bring further awareness to cultural diversity, and that members of every cultural group will learn from this celebration.” For more information, visit mywhcc.com email info.whcc@gmail.com or call (203) 715 WHCC (9422) Program subject to change.

This Connecticut-based rock band plays a mix of catchy original songs and unique covers. Each member of the group (Christian DiCaprio on vocals, Steve Parenti on guitar, Ben Walters on bass, and Tommy D’Andrea on drums) is a multi-instrumentalist, adding unique dynamic to the band’s songwriting style.

Founders Alana Mah and Alia Ashley combined their first names to become Aliana, created in 2013. Often performing with prominent artists and musicians from the Tri-State area, as well as internationally acclaimed musicians, they strive to preserve – with a mixture of all walks of West Indian descent included in the group – an ancient art that has been passed down for generations.

A folk-rock singer/songwriter and producer based in Port Chester, New York, Emily’s music fuses poppy, rich melodies from a country suburban past with soulful lyrics derived from years of experiencing life in New York City and the Bronx.  Her latest EP, combines four-to-the-floor House style of Mumford, the storytelling of Taylor Swift, and the rock-n’-roll edge of Janice Joplin.

Through a variety of programs in dance, martial arts, instrumental music, songs, and other cultural activities, Asian Performing Arts promotes and preserves Chinese cultural arts.  Established in 1997, members of the group have many years of experience in performing for major functions including cultural activities and fund raising events across the CT, NY, MA, and New England areas.

The Russian music, dance and song ensemble, Барыня, established in the year 1991, is a world renowned group that enjoys its stature as the premier Russian folk ensemble.  It presents Russian, Cossack, Ukrainian, Russian Roma Gypsy traditional dancing, and virtuoso performances on instruments including the balalaika and  garmoshka. The troupe has performed at Carnegie Hall, the United Nations, the Russian Embassy in Washington D.C., and also performs annually at the Russian Nobility Ball in New York.  Founder and Artistic Director Mikhail Smirnov served as a judge on NBC’s hit dance show, Superstars of Dance.

What started with a group of four insurance professionals in 2007, trying to keep alive and pursue their enthusiasm for Bollywood style Indian dance in the Greater Hartford area, soon transformed into formal lessons for kids, adults and specific events such as weddings and receptions, operating primarily out of the suburb of Rocky Hill CT.

Lauren trained at Arthur Murray School of Dance as a ballroom dancer in Charleston, SC and specialized in many social dances including Fox Trot, Waltz and Cha-Cha, later adding Lindy Hop and Balboa to her elegant repertoire. Her partner Paolo is a 20-year veteran of Swing Dance, specializing in the Lindy Hop, Balboa, Collegiate Shag, Charleston and The Madison. He’s been a fixture at Lincoln Center’s Midsummer Night Swing since 1999.

This traditional dance troupe is centered at Wat Rattanaram, a Buddhist temple/monastery in Bristol, CT.

Eve’s rich musical past has cultivated her sultry blend of R&B, Soul and Jazz into an authentic fusion of vocal freshness and sophistication. She has long applied her skills to the stage, including performances at many of New York’s notable venues from Webster Hall to CBGB’S Gallery, China Club, Babalu Theater, Anita Durst’s Chashama Theater, Spirit NYC and SHOW nightclub.

Newcomer Elizabeth Hanney began singing literally before she could talk. Accompanied by Mike Goldberg,  she is a precocious artist with a wide range of musical influences and natural ability to connect with our hearts and dreams.

Established in 2010 in western Connecticut, JPA is dedicated to preserving Asian culture, serving communities in the New England area. Like jasmine, the company is simple, elegant, fragrant and spotless.  A unique addition to their performance will include a Fashion Show.

Born in Suriname, South America, for the past 21 years the singer, guitarist, bassist, drummer, percussionist, songwriter and music composer has lived in NY. He sings in Hindi, English and Spanish, Sranang Tongo ( an African dialect), Dutch, Urdu and Punjabi, and has an original song video posted on You Tube.

The Lao Association of CT

The Lao-American Nathasinh is a partnership of a few families who teach Lao and non-Lao students to preserve Lao culture and traditions, including traditional dances.

Major Daps, or “Daps” as many of his colleagues call him, was born on the beautiful and influential island of Jamaica. Major Daps sings his experiences from Jamaica as well as the love and wisdom gained from his Grandmother Irene, Mama Maudlyn, and the rest of his close knit family members. He has always used Reggae music as a tool and outlet to express his innermost thoughts and feelings.

Accomplished dancer and classical vocalist, with a Masters degree from ABGMM, Mumbai, she specializes in the Odissi style of Indian Classical dance from the eastern state of Odisha in India. Danbury-based, She is Founder and Artistic Director of Soortaal, training in Indian Classical Dance and Music as well as Bollywood and Contemporary dances. Ms. Nanda is a recipient of the “Human Greatness Award” presented by the Danbury’s Mayor Boughton for community outreach.

Representing Guyana, Trinidad and Suriname, this group provides a collaboration of sound, percussion and entertainment with the aim to make audiences feel the unique energy, passion and excitement they bring to the stage. Naturally!

The Philippine-American Association of Connecticut

For the past three years, the PAAC has given special attention to Education. It established the Paaralang Pilipino, a summer-long educational instruction of Filipino language, culture and arts, and continues to support the efforts of Camp Mabuhay North, a weekend camp for American families with adopted children from the Philippines. The active charity annually joins in the yearly Philippine Independence Day Parade in NYC, performing traditional street dance. Kitchens and more.

This culturally charged arts education program in Greater Hartford elevates and encourages youth to be proud of their cultural ancestry of the African Diaspora. Its Proud Drill, Drum & Dance Corps, founded in 2012, integrates movement, sound and artistry in the overall development of young people.

Multifaceted guitarist Joe Ravo and multi-instrumentalist and singer Allison Scola have created an ensemble that calls upon their southern Italian roots and American know-how. Eclectic, acoustic pop brushed with hues of Mediterranean folk is the avenue on which Villa Palagonia perches—yet the side streets and dusty alleyways that these musicians have traveled offer engaging timbres woven together by songs imparting tales of the old world and the new.

The mission of the World Heritage Cultural Center (WHCC)  is to make a positive impact through knowledge and charity by creating a common ground where any culture in the World can come and celebrate their way of life through the arts and food. The organization is responsible for hosting the World Stage at the popular Trade & Adventure Show, the largest of its kind, which tours major cities throughout the US annually. World Heritage Cultural Center collaborates with the American Cancer Society, the Be A “STAR” Campaign, Daniel’s Music Foundation, and Alex’s Lemonade Stand Foundation, and continues to work with worldwide institutions with similar visions. Sattie Persaud, founder and executive director. (203) 715 9422 or visit www.mywhcc.com