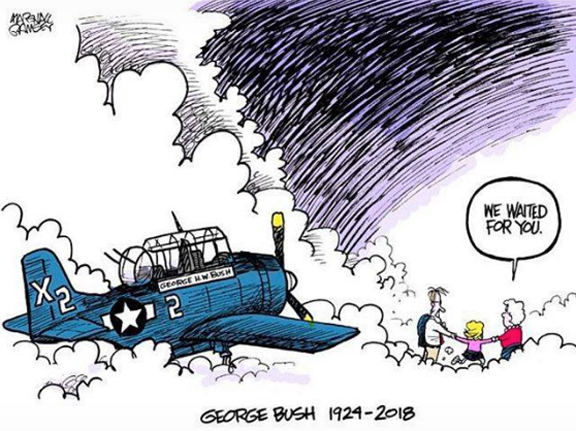 Jenna shared a drawing of a depiction of her grandfather and grandmother, the late former 41st U.S. President George H.W. Bush and the late former First Lady Barbara Bush, reunited in Heaven, with their late daughter Robinson “Robin” Bush, the couple’s second oldest child, who died of leukemia at age 3 in 1953.

“Waking up missing this giant of a man who gave me everything. He taught me and my family about service, family, decency, the power of gentle words and a beautiful heart. I will miss him desperately but so happy he and my Grandmother are back together.

“This brought me such comfort this morning.

“I had the opportunity to talk with my grandpa about the afterlife. This is what he said: He answered without any hesitation. ‘Yes, I think about it. I used to be afraid. I used to be scared of dying. I used to worry about death. But now in some ways I look forward to it.’ And I started crying.”

“I managed to choke out, ‘Well, why? What do you look forward to? And he said, ‘Well, when I die, I’m going to be reunited with these people that I’ve lost.’ And I asked who he hoped to see. He replied, ‘I hope I see Robin, and I hope I see my mom. I haven’t yet figured it out if it will be Robin as the three year old that she was, this kind of chubby, vivacious child or if she’ll come as a middle-aged woman, an older woman.’ And then he said, ‘I hope she’s the three-year-old.’

“Robin was the daughter this giant of a man lost years before to leukemia. The little girl he held tightly: who spoke the phrase I have heard Gampy repeat for my entire life, forever knitting Robin’s voice into the tightly woven fabric of our family: “I love you more than tongue can tell.”