There is a set list of names, determined by the World Meteorological Organization, that will be used for any storm that reaches tropical storm status or higher (tropical storms have winds of 39 mph, or 63 km/h, or higher). 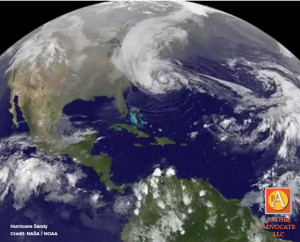 ‘There is a set list of names, determined by the World Meteorological Organization, that will be used for any storm that reaches tropical storm status or higher (tropical storms have winds of 39 mph, or 63 km/h, or higher),” according to livescience.com.

They state, “Each list is used on a six-year rotating basis — so the names used for 2013 will be used again in 2019. New names are added to the list when an old name is retired, which happened most recently with Hurricane Sandy (it was replaced by “Sara” on the now-2018 list). Names are retired when the damage wrought by a storm would make using its name again insensitive to those affected by an earlier storm.”

Each list of hurricane names in the Atlantic basin alternates between male and female names, running through the alphabet (though there are no names beginning with Q, U, X, Y or Z).

Since 1953, Atlantic tropical storms had been named from lists originated by the National Hurricane Center. They are now maintained and updated through a strict procedure by an international committee of the World Meteorological Organization.

The six lists above are used in rotation and re-cycled every six years, i.e., the 2014 list will be used again in 2020. The only time that there is a change in the list is if a storm is so deadly or costly that the future use of its name on a different storm would be inappropriate for reasons of sensitivity. If that occurs, then at an annual meeting by the WMO committee (called primarily to discuss many other issues) the offending name is stricken from the list and another name is selected to replace it. Several names have been retired since the lists were created. Here is more information the history of naming tropical cyclones and retired names.

In the event that more than twenty-one named tropical cyclones occur in the Atlantic basin in a season, additional storms will take names from the Greek alphabet.

Can I have a tropical cyclone named for me?

The names are used one after the other. When the bottom of one list is reached, the next name is the top of the next list.