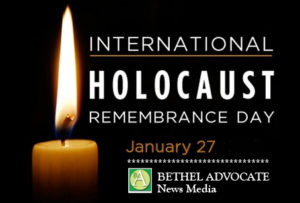 “The United Nations General Assembly designated January 27—the anniversary of the liberation of Auschwitz-Birkenau—as International Holocaust Remembrance Day. On this annual day of commemoration, the UN urges every member state to honor the six million Jewish victims of the Holocaust and millions of other victims of Nazism and to develop educational programs to help prevent future genocides.” –The United States Holocaust Museum

The White House statement read, “Tomorrow marks the 73rd anniversary of the liberation of Auschwitz-Birkenau, the Nazi death and concentration camp in Poland.”

“We take this opportunity to recall the Nazis’ systematic persecution and brutal murder of six million Jewish people. In their death camps and under their inhuman rule, the Nazis also enslaved and killed millions of Slavs, Roma, gays, people with disabilities, priests and religious leaders, and others who courageously opposed their brutal regime.”

“On International Holocaust Remembrance Day, we acknowledge this dark stain on human history and vow to never let it happen again,” the White House statement read.

In 2017 Trump was criticized for not mentioning Jews in the statement.

See their new family-friendly installation, The Number on Great-Grandpa’s Arm, (on view January 21, 2018 – April 29, 2018) have a conversation with two Holocaust survivors in the acclaimed New Dimensions in Testimony℠, and light a candle of remembrance in their communal space.