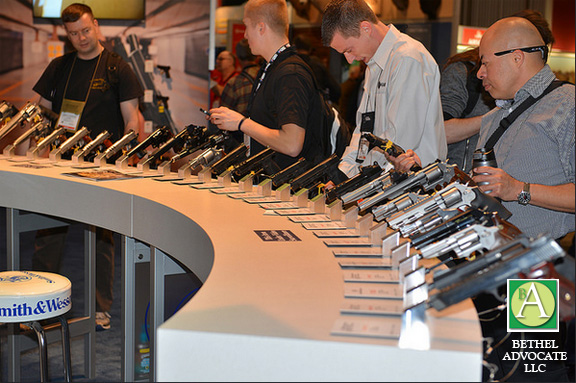 NSSF: “The National Shooting Sports Foundation’s Shooting, Hunting and Outdoor Trade Show (SHOT Show®) rang up its second highest attendance total ever, attracting more than 64,000 industry professionals during a four-day run. Held at the Sands Expo Center Jan. 19-22, the SHOT Show also attracted a record number of buyers, sending a strong signal about the health of the firearms industry.” 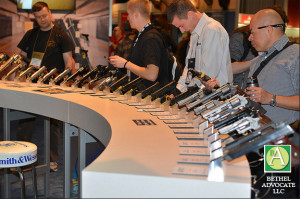 On January 18, 2016 the Newtown Action Alliance (NAA) was joined by other groups to protest the Newtown-based National Shooting Sports Foundation (NSSF) “irresponsible marketing and lobbying practices” and a Las Vegas Shooting, Hunting, and Outdoor Trade Show (SHOT Show) in which the NSSF was participating (show took place from Jan. 19-22 and is considered the largest U.S. firearm national trade show).  The Newtown protest was held at 4:00 p.m. in front of the NSSF headquarters on 11 Mile Hill Road, Newtown, CT.  Both sides of the gun control issue were represented at the protest, many from the NSSF.  Over 100 individuals participated in the rally.

Despite this protest rally by the Newtown Action Alliance, Connecticut Against Gun Violence, Brady Campaign Southwest CT Chapter, Greenwich Council Against Gun Violence and the Enough Campaign, one of the protest issues, the 2016 SHOT Show, appears to have been a success.  The following is info. from the NSSF: 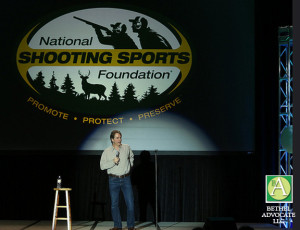 Photo above: State of the Industry: Jeff Foxworthy entertains the crowd

“We are ecstatic at the response to this year’s show,” said Chris Dolnack, NSSF Senior Vice President and Chief Marketing Officer. “And we’re optimistic for a year of strong sales, shooter participation, business-to-consumer outreach efforts, safety education and technological innovation.”

This year’s SHOT Show offered several new features that were well-received. These included SHOT Show TV, which aired in more than 70,000 hotel rooms across the city, a new NSSF Members Reception and the SHOT Show NEXT Pavilion.

“It takes an in-depth knowledge of what our industry wants and where it wants to go to pull off a show of this size and have the vast majority of those attending state, unequivocally, that this is the best show they’ve attended in years,” said Dolnack. “That kind of positive response is the result of working hard to add value to the customer experience through new, innovative features.” 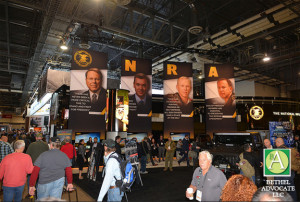 The SHOT Show NEXT Pavilion display counters were an enormous hit, giving exposure to 100 top-tier vendors selected from the long list of those waiting for booth space on the main exhibit floors.

“I think the NEXT Pavilion has worked out well,” said David Fillers, CEO of DDI, one of the new NEXT exhibitors. “It was a good deal, and I’ve probably sold a couple months’ worth of production.”

Drew Gilkerson of Gunner Kennels made the new venue work for him, saying, “We doubled up and had product in the New Product Center. I think that was critical to the good response I’ve had up here in the NEXT Pavilion. This has been phenomenal.” 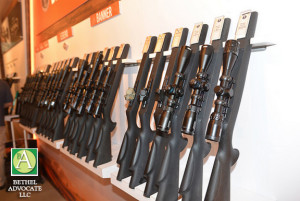 If the buyers were happy, the exhibitors were a mirror reflection of them.

“Obviously SHOT Show is important to us,” said Tom Taylor, Vice President of Sales and Marketing for Sig Sauer. “We made a huge investment in the booth because we want our customers to know that we are a total system provider.” And it was evident from the crowd in the booth that the effort wasn’t lost on anyone.

Thomas O’Keefe, President, Winchester Ammunition, was also pleased with this year’s show. “The show has gone perfectly,” he said. “We’re celebrating our 150th anniversary, and there’s a tremendous level of excitement that comes with that. We’re very proud of our new products, and indications are that the coming year should be very exciting. We’re also very pleased that the show is so well organized and well run–we’re very proud to be part of the NSSF.” 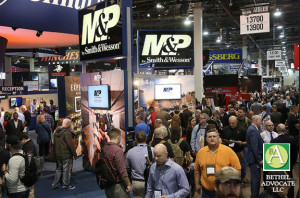 Paul Pluff, Director, Marketing Communications with Smith & Wesson, said, “This is the premier show for us, and once again this has been a very busy time. The response to our new products has been fantastic, and based on what we’re seeing, we’re very much looking forward to the year ahead.”

Jason Vanderbrink, Vice President of Sales for Vista Outdoor, was very upbeat about the show traffic. “We’ve had a very good show. Booth traffic has been great, and the new product intros have all been received very well, especially with the help of our brand ambassadors on television, YouTube, etc., who have helped drive a lot of interest. The mood is good.”

John Iacobelli, Director of Engineering for GunBroker.com, said, “The show has been wonderful. It allows us to expose our marketplace to the dealers so that they can have an alternate avenue for selling their products. We open their doors to the nation.” Donald Hall, the company’s CEO, said simply, “We’re swamped. It used to be retailers saw us as competition, now they see us as a resource.”

“Our booth has been incredibly busy, and this show has the most positive energy I’ve ever seen,” said Ryan Repp, Communications Manager, Brownells. “These are serious thoughtful customers.”

Mike Schwiebert, Vice President of Marketing for Weatherby, put the show in context by saying, “In my 17 years of working SHOT Shows with Weatherby, this is perhaps the busiest show I’ve ever had.”

Dave Miles, Director of Marketing for O.F. Mossberg and Sons, echoed those sentiments.

“The show has been amazing,” Miles said. “SHOT Show always plays a role in a successful selling season, and this year will be no different. We’ve had great response to new products, and that enthusiasm is translating into a significant uptick in business.”

The upbeat, positive attitude was omnipresent.

“This year’s opening day was the best I’ve ever experienced, and we’ve been a SHOT Show exhibitor for decades,” said Robin Sharpless, Executive Vice President of Redding Reloading. “We are especially thrilled by the international presence–everyone wants to be a part of this industry.” 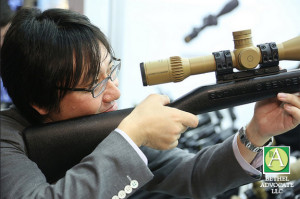 The excitement for what 2016 will mean to the firearms industry was at a near fever-pitch in the law enforcement hall.

Darren Jones, Media Relations and Sales with SilencerCo, said, “This show has been completely overwhelming–in a good way. We’ve had tremendous response to our newly launched products, and it will probably be one of our best years ever. We fully expect the ball to keep rolling.”

Media members, who have sometimes found face-to-face time with product and marketing mangers tough to come by when buyers are as busy placing orders as they were this year, found a very receptive show floor.

“This is the most exciting SHOT Show I’ve been to in many years,” said author and TV host Craig Boddington. “There’s lots of energy and enthusiasm, lots of buzz about people wanting to get into the industry, wanting to shoot–it’s great to see.” 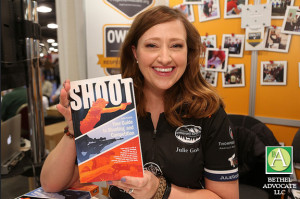 Photo above: Julie Golob, professional markswoman, competition shooter, and national/world champion signing her book SHOOT: Your Guide to Shooting and Competition at the Project ChildSafe booth.

More than 1,600 exhibiting companies filled the convention center and ballrooms in the adjoining Venetian Hotel. Total show exhibition space was more than 640,000 net square feet, or 13 acres of product display, with more than 60 new companies exhibiting on the main floor in addition to the 100 added to the NEXT Pavilion.

On the first evening of the show, more than 2,400 people attended NSSF’s State of the Industry Dinner, where Steve Sanetti, NSSF President and CEO, delivered a well-received speech that exhorted industry to stay alert in this important election year.

“Much of the public and the media are woefully misinformed about who we are and all that we do about genuine gun safety,” said Sanetti, who pointed out to such notable NSSF programs as Project ChildSafe, FixNICS and Don’t Lie for the Other Guy.

“We have to face the fact that our industry is being blamed, and attacked and pilloried unfairly by politicians, media and agenda-driven social engineers seeking a convenient scapegoat for the result of policies which, ironically, they themselves have championed,” said Sanetti. “So, ladies and gentlemen, the state of our industry is, and must be throughout the year–alert.

At the dinner, Ted Rowe, whose decades-long executive involvement in the firearms industry, including his time as President of the World Forum on the Future of Sport Shooting, received the prestigious NSSF Ken Sedlecky Award for his enduring commitment to the success of the industry and supporting NSSF’s mission to promote, protect and preserve hunting and the shooting sports.

The SHOT Show is not just about selling and buying products. The show provides educational opportunities for firearms retailers at the sold-out SHOT Show University, this year enhanced with sessions covering range management and sessions geared toward veteran retailers; at a full slate of diverse Retailer Seminars, including two capacity sessions on NFA firearms and accessories; and for law enforcement professionals at the Law Enforcement Education Program that covered such topics as mission-specific tactical optics and getting the most out of agency K9s.

The SHOT Show is managed by Las Vegas-based ConvExx. NSSF extends its gratitude to major sponsors of the 2016 SHOT Show. For the fifth year in a row, Ram Truck was the official truck of the SHOT Show. Daniel Defense, Georgia Department of Economic Development, Aguila Ammunition, Brownells, GunBroker.com, Sig Sauer, SilencerCo, Smith & Wesson, Vista Outdoor and Winchester Ammunition were major sponsors, as was Nissan, which repeated its sponsorship of the Press Room in addition to sponsoring the New Product Center.

The SHOT Show, the fifth largest trade show in Las Vegas, pumps nearly $90 million in non-gaming revenue into the Las Vegas economy. The 2017 SHOT Show is scheduled for Jan. 17-20 at the Sands Expo.

About NSSF
The National Shooting Sports Foundation is the trade association for the firearms industry. Its mission is to promote, protect and preserve hunting and the shooting sports. Formed in 1961, NSSF has a membership of more than 12,000 manufacturers, distributors, firearms retailers, shooting ranges, sportsmen’s organizations and publishers. For more information, visit www.nssf.org.

Disclamer: The above article is not the opnion