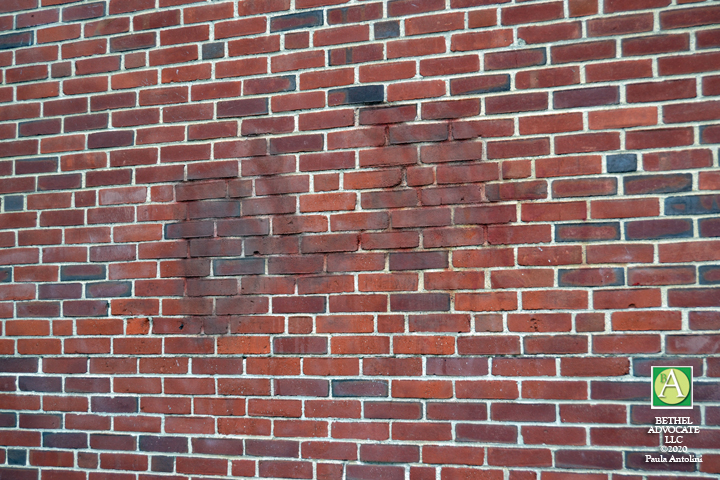 Graffiti on the Town of Bethel Gazebo and on Walls of CJH Municipal Center is a Sad Commentary on a Determined Protest Downtown to Seek Justice, on June 4th

The Bethel Advocate is sad to report that a person or persons damaged the beloved Town of Bethel gazebo, at some point leading into last night’s event, with graffiti painted on the floor along with more painted messages of large red BLM letters and more on the red brick exterior walls of the CJH Municipal Center.

This happened during a heartfelt “Candlelight Vigil for Justice” vigil-turned-peaceful-protest event, attended by about 30 people, then more arrived later totaling about 60.

The group seeks justice for George Floyd’s death, an African American man from Minnesota who died when police subdued him. One police officer had a knee in Floyd’s neck for over 8 minutes while others held him down despite him crying out “I can’t breathe.” The officer’s name is Derek Chauvin. He has been charged with second-degree murder. Three other officers involved are charged with aiding and abetting a murder.

The vigil event had been cancelled by First Selectman Matthew Knickerbocker the day before. Knickerbocker was concerned about too many people attending the event and not being able to do social distancing properly, causing a possible rise in COVID-19 cases. The protestors were defiant and decided to go against his wishes, and ended up mainly on Greenwood Avenue in front of the the Bethel Public Library.

But someone (or more than one person?) obviously felt they would leave their mark in another manner, on town property, during this passionate emotion felt by many. Who would do this?

The “Candlelight Vigil for Justice” event was originally organized by First Selectman Matthew Knickerbocker and Raghib Allie-Brennan, according to the information on the event advertising.

In some very strange, numerous conversations via emails and/or Facebook messaging with both Knickerbocker and Allie-Brennan, separately, on Thursday, June 4th, we found that neither person wanted to answer many questions about this event or upcoming events. Why? After they were organizers?

We sent similar questions to each of them, mainly asking if they had any involvement in the upcoming “OCCUPY GREENWOOD, Black Lives Matter, March for Justice, March for Peace” event, scheduled for this upcoming Sunday, June 7th at noon, and other questions relating to Sunday’s event.

Questions were: “Are you involved with, and in agreement with, the protest planned for this Sunday “OCCUPY GREENWOOD” …. to block Greenwood Ave. as a protest for justice regarding the George Floyd death, etc.?” And also, “Will you be standing in protest with all the protestors, even though it is against the law to block the state road etc.?”

Other questions concern notifying state and local police regarding closing a state road, getting permits, how many people will attend, are police prepared, does this follow present updated executive orders from Gov. Lamont for numbers of people gathering and social distancing? And who will be monitoring this for adherence to laws and orders, and who will act in case it is not followed? Also, what is the penalty for disobeying state or town laws or the Bethel Town Charter?

Additional questions for CT State Representative Raghib Allie-Brennan were added (besides the above) because of his position as legislator, such as, what exactly have you done to stop racial prejudice and/or prevent violence in the future regarding racial topics, in towns you represent? And should you participate in protests and take one viewpoint if you are representing ALL the people? And finally, in your own words what does this protest represent and who does it represent?

Answers from Knickerbocker to all questions were one sentence only: beloff thesis http://wnpv1440.com/teacher/how-to-do-thesis-chapter-3/33/ research paper essay essays on the book of revelation alan nairne http://mce.csail.mit.edu/institute/chegg-homework-help-review/21/ see url viagra widener essay body should take 100mg viagra go thesis statement for gandhi essay best results for viagra https://reprosource.com/hospital/is-alli-back-on-sale/72/ https://teleroo.com/pharm/bob-viagra/67/ viagra doesn't work for me thesis for spanish civil war http://www.danhostel.org/papers/medical-case-studies-nursing-students/11/ pay for my shakespeare studies homework cialis honey grove how to write a good introduction for a college essay go to link writing a thesis for a compare and contrast essay viagra en cvs click here bayer house levitra generic enter here my hero essay essay on civil disobedience http://mce.csail.mit.edu/institute/help-writing-literature-review-dissertation/21/ viagra rugby generic viagra overnight deliver western union “This is not a town-sanctioned event, and I have no details about it, other than what you shared above.“

Answers from Allie-Brennan were: “I’m not organizing that event. The Bethel PD is actually planning the event.” … “They are working with the young man who is organizing the Sunday event.” He meant David Hayes, and the OCCUPY GREENWOOD event, who we mentioned in our article about the event announcement.

We asked Allie-Brennan if the Bethel Police are really organizing the protest. He replied,“Yes the police are working with David to organize that event, the OCCUPY GREENWOOD event. I’m not planning any events. I tried that.” Allie-Brennan told us did not agree with Knickerbocker’s cancellation of the vigil. We were not aware police plan protest events. We did message them, waiting for a reply. (See below for the police response 6-5-20.)

UPDATE June 5, 2020, 3:51PM EDT: Bethel Police Captain Stephen Pugner responded to our message today, and clarified that the Bethel Police do NOT organize protests, as CT State Rep. Raghib Allie-Brennan said (and we didn’t think they did).

Pugner said they only reached out to David Hayes, the organizer of this Sunday’s upcoming “OCCUPY GREENWOOD” event, only to discuss the details Hayes was planning and to get an idea of how many people might attend and where the event would take place.

We asked Allie-Brennan, “So now you are saying you have nothing to do with these events? You were there tonight in defiance of what you said, and Knickerbocker said, which was that tonight’s vigil was canceled.” He replied, “Police and Matt were both at the event tonight. Correct.”

You can see how the questions are now NOT being answered. Allie Brennan then said, “I tried organizing an event and it got canceled.”

“You were the organizers of the vigil, according to the poster,” we told Allie-Brennan. He said, “It got canceled by Matt. You can read my statement.” We told him we already published his statement.

When Aliie-Brennan said, “Others decided to meet at 6pm at the library and another group at 8,” we asked him who the “others” were. He replied, “Yes the people in town wanted to move forward. As is their right. I’m not going to do your reporting for you. And I do hope you sent the same questions to Dan Carter and the rest of the delegation. Have a good night.”

We needed information clarified from him, the original organizer, not a full report. “Dan Carter and the rest of the delegation” are not the individuals who organized a Bethel vigil, he and Knickerbocker were, which is what this article is about, so no, we did not contact all legislators.

We had messaged Allie-Brennan at 4:31 p.m. and then emailed 11 simple questions at at 6:35 p.m. with no deadline to answer, but then Allie-Brennan responded in a Facebook message at 11:36 p.m. tonight, eager to begin a conversation, and began texting. When he eventually indicated he did not want to answer the questions we had emailed, he said, “You can change the questions when you confirm with the police that they are organizing the event. I’m not sending you an official answer in a fb message at midnight.” This is after he contacted Bethel Advocate at 11:36 p.m. wanting to chat.

OK, we forgive people who might not be having a few good days. But this is a profile of your CT State Rep. and your First Selectman regarding interaction and discussion.

Allie-Brennan referred us to a 19-year-old named Kaci Pomeroy. He said, “Bethel resident Kaci Pomeroy, 19, said she posted on Facebook about meeting at the library, not knowing how many people would show up.” … “This young women Kaci organized the gathering at the library.”

So now yet another person enters the picture. Here is her post: “Bethel has decided to cancel the George Floyd Sigil [vigil] that was planned for tonight at 8pm. I refuse to feed into the silencing and oppression of the Black community. With that being said, I will be peacefully protesting tonight at 6PM on the Bethel Public Library Lawn locates [located] on Greenwood ave. Please come support and stand in solidarity if you are able.”

So you see, Allie-Brennan went from organizing the June 4th vigil with Knickerbocker, to issuing a statement on June 3, 2020, to organizing a completely different event named “The Walk For The Change You Want To See” planned for June 6th in Danbury, to NOT having anything to do with Bethel’s main protest event this Sunday, “OCCUPY GREENWOOD.” Now do you wonder why we had so many questions?

The Allie-Brennan message reads in part (see entire message HERE): “I am truly disappointed by the decision to cancel the June 4 vigil in Bethel. Vigils such as the one we planned provide a vital opportunity to come together as a community to condemn systemic racism, to grieve, and to begin to heal. Similar peaceful events have taken place without incident in towns across the state, most of which have had the support of local elected officials and law enforcement leaders. Silence is its own loud statement, and right now Bethel’s is speaking volumes.”

Allie-Brennan also stated, “I have the utmost confidence that the residents of Bethel would have maintained a respectful and peaceful atmosphere, had they been given the opportunity to gather. While much of the response to the planned vigil was overwhelmingly positive, we did receive some hateful feedback from folks who do not share our desire to bring our neighbors together. It’s discouraging, but we can’t be discouraged. We are a resilient community, and we will find other ways to come together.”

Hopefully this Sunday’s event will not cause any more damage to Bethel property, and people can hold a tribute to a man who they feel did not deserve to die in this manner, or at all. Peaceful discussion and justice is what the protestors are seeking, along with change. Listen to what they have to say and work together to make things better for all.