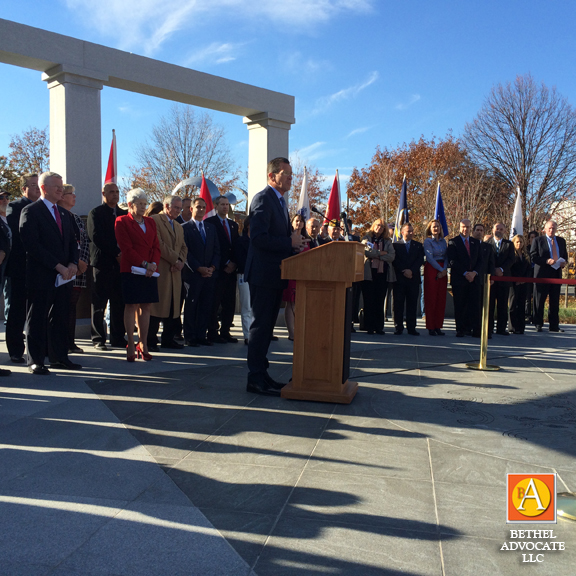 Located inside of Minuteman Park at the intersection of Capitol Avenue and Broad Street in Hartford – directly in front of the William A. O’Neill State Armory – the memorial pays tribute to the more than 1.3 million men and women from Connecticut who served honorably in the U.S. military in defense of our freedom.  It recognizes past, present, and future Connecticut veterans and will serve as a site for official observances, activities, and ceremonies that honor veterans. 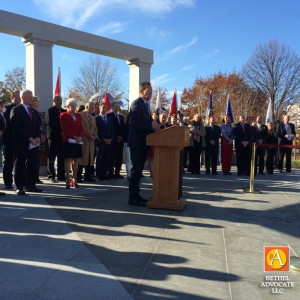 Memorial Pays Tribute to the More Than 1.3 Million U.S. Military Veterans from Connecticut

Located inside of Minuteman Park at the intersection of Capitol Avenue and Broad Street in Hartford – directly in front of the William A. O’Neill State Armory – the memorial pays tribute to the more than 1.3 million men and women from Connecticut who served honorably in the U.S. military in defense of our freedom.  It recognizes past, present, and future Connecticut veterans and will serve as a site for official observances, activities, and ceremonies that honor veterans.

“The Connecticut State Veterans Memorial serves as an enduring tribute to the high regard that we hold for the more than 1.3 million Soldiers, Sailors, Airmen, Marines, and Coast Guardsmen from Connecticut who have served our state and our nation since the Revolutionary War,” Governor Malloy said.  “Our state has a deep military history, and over 200,000 veterans continue to call Connecticut home today.  The opening of this memorial in our capitol city will provide all of us with a special place to honor those who have served, those who have made the ultimate sacrifice, and those who continue their courageous work around the world today.”

“So many people have worked tirelessly to get this tribute completed – a place to gather, remember, and reflect on the millions of Connecticut residents who helped build and protect this great nation,” Lt. Governor Wyman said.  “This memorial tells a story about our country and the men and women throughout history who have sacrificed so much to keep us safe.  We are grateful to our veterans, and thank the committee for establishing this memorial.” 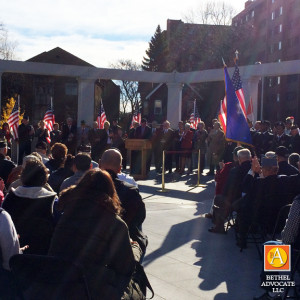 The memorial features pillars representing the five branches of the military, large stones reflecting U.S. wars and conflicts, and smaller pavers engraved with the names of Connecticut veterans.

“Our veterans have served bravely and sacrificed much for the sake of our freedoms,” Congressman John Larson said.  “I commend the Connecticut Veterans State Memorial Committee for their tireless work on this tribute.  We owe our veterans much, and I am proud to see their heroism recognized today.”

“This is an historic occasion which also marks the culmination of a long journey from 2007 to this event,” Assistant Secretary Schwartz said.  “Many citizens and veterans contributed time, resources, finances, and talents to bring this memorial to life.  Hours upon hours of an ‘all-volunteer’ force are precious gifts brought to bear in honoring the men and women of our state who answered the call to protect and defend freedom.  Our hope is that for generations to come, Connecticut will always have this memorial to honor our veterans.”

“Several years ago, a small group of dedicated Connecticut veterans and volunteers were given the mission to establish a statewide memorial to honor our veterans, from the past, the present, and future,” Connecticut Army National Guard Lieutenant Colonel Lesbia Nieves, who serves as Co-President of the Connecticut State Veterans Memorial Board of Directors, said.  “Today, we are proud to introduce Connecticut residents to this special place where veterans can gather and we can honor all who have served our country.”

“It is especially gratifying that so many veterans organizations and families of veterans stepped forward and helped to support the construction of this project,” Sergeant Peter Galgano Jr., Co-President of the Connecticut State Veterans Memorial Board of Directors, said.  “This is particularly evident in the hundreds of personalized granite pavers placed at this site, permanently remembering Connecticut servicemen and women forever.”

Commissioner Connolly said, “Our great State of Connecticut has a long standing tradition of serving those who have served.  Benjamin Fitch of Darien established the first home in the entire country dedicated to veterans in 1864.  That tradition of appreciation and gratitude for our military men and women continues today as we officially open the Connecticut State Veterans Memorial with the incredible efforts put forth by the committee to see this to fruition.”

Major General Thad Martin, Adjutant General of the Connecticut National Guard, said, “To be able to look across the street from our headquarters and see a memorial dedicated to the sacrifices made by Connecticut’s veterans is a lasting reminder of why we serve today.  The hard work it took to make this memorial possible goes to show just how much Connecticut’s citizens care about those who answered their nation’s call.”

The construction of the memorial was supported by $614,500 in state bonding and by private donations from companies, foundations, and individuals.  Engraved pavers for the memorial may still be ordered.  Additional information is available at www.cthonorsvets.org.