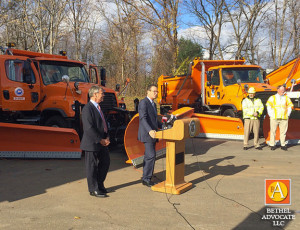 CTDOT’s winter maintenance and snow-clearing operations cover a roadway network of over 10,800 lane-miles, in addition to commuter parking lots and state facilities. Replacing outdated plow trucks with new models will likely deliver not only better service, but increased capacity since there will likely be less downtime due to repairs caused by the older vehicles. These new fleets of snowplow trucks will come with ELDs (Electronic Logging Devices) as standard, to log miles driven, uptime and downtime, as well as whether drivers are on break or supposed to be doing their jobs, a lot of vehicle fleets require these devices as standard, by regulation. Which is why many fleet companies will often ask what is the best ELD to get for their vehicle requirements.

“Our state’s transportation infrastructure is directly tied to the economic wellbeing of our state and our ability to grow jobs, and it is imperative that we have the tools needed to provide our state’s residents with a best-in-class system, including during the winter weather events,” Governor Malloy said. “We are preparing for winter weather like never before – our efforts and new initiatives are critical to mitigating the impact of severe weather.”

CTDOT’s current snow and ice fleet consists of 632 trucks, 275 of which have been identified as overdue for replacement. As the new vehicles are being delivered, CTDOT will retire 114 of the outdated trucks by auctioning some and using the remainder for spare parts. While the average life of a typical plow truck is 12 years, the average age of the plow trucks that are being replaced is about 16 years old.

The fleet additions will also include two new front line trucks dedicated specifically to the CTfastrak guideway, which will bring the total winter fleet to 634 trucks.

“Snow and ice removal is a core function of the CTDOT and we need to be confident that our trucks are in a state of constant readiness. That means potentially having them serviced or repaired with companies such as Ferguson Truck Center, and making smart investments and upgrades to ensure the reliability of our front-line snow-fighting vehicles and support equipment,” Commissioner Redeker said. “Connecticut’s economy and the safety of the motoring public depend on our crews and their equipment being able to handle whatever Mother Nature sends our way. Our new trucks, and the steadfast men and women who operate them, as well as those in support positions behind the scenes, will allow us continue to get the job done more effectively, efficiently and at less cost to taxpayers.”

CTDOT has achieved significant cost savings. In comparison to previous years, the cost of CTDOT’s standard plow truck package has resulted in a savings of over $32,000 per truck. Additional cost-savings resulted from the purchase of tandem double-wing plows that allow clearing of over 24 feet of road in a single pass and are resulting in savings of over $32,000 per unit over like-item trucks purchased in the past.

CTDOT is currently in the process of stockpiling salt and liquid deicers, which 72,000 tons of salt and 417,000 gallons of liquid deicer currently on hand. CTDOT has purchased three Salt Slurry units that grind salt and injects liquid deicers, which can be used as pretreatment for cold trouble areas, provides quicker clearing of roads, keeps material in the travel lanes of the road, and virtually eliminates wasted salt. CTDOT is also transitioning to carbide long wear plow blades, which last an entire winter season as opposed to the steel blades currently being used that last only one to two storms.

Many of the fleet enhancements that are being implemented stemmed from a 2011 effort led by Commissioner Redeker to improve the agency’s existing fleet of maintainer trucks in part by reaching out to the end users (i.e. drivers) and soliciting feedback to address areas such as functionality, safety, warranty, driver well-being and cost. This took the form of multiple meetings, or “Tailgate Talks,” initiated by CTDOT’s Bureau of Highway Operations’ Office of Equipment Repair with the frontline employees who are most familiar with the gaps, areas in need of improvement and the general state of the vehicles and equipment that make up the agency’s Highway Maintenance and Operations fleet.