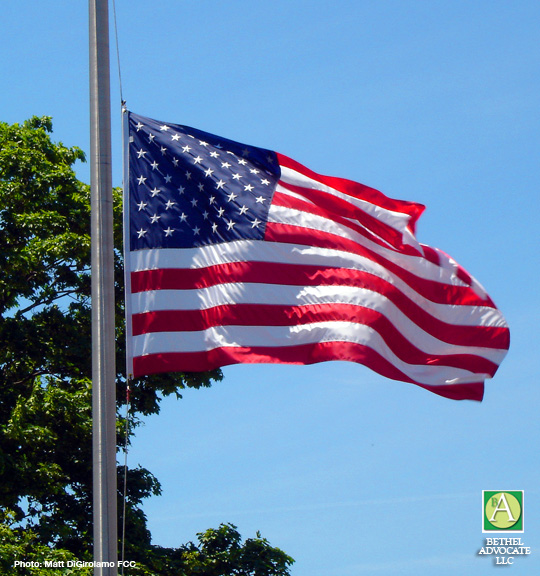 Pearl Harbor Memorial Bridge in New Haven Will Be Illuminated Red, White, and Blue Throughout the Holiday Weekend

(HARTFORD, CT) – Governor Ned Lamont today announced that he is directing U.S. and state flags in Connecticut to be flown at half-staff on Monday, May 25, 2020, from sunrise until noon in observation of Memorial Day to honor and mourn those who have died while serving the United States Armed Forces. As is customary and unique for this holiday, flags are lowered throughout the duration of the morning and then raised to full-staff promptly at noon for the remainder of the day. Accordingly, since no flag should fly higher than the U.S. flag, all other flags, including state, municipal, corporate, or otherwise, should also be lowered during this same duration of time.

In addition, Governor Lamont announced that the state will illuminate the Pearl Harbor Memorial Bridge in New Haven – informally known among residents as the Q Bridge – in red, white, and blue lights each night this holiday weekend beginning on the evening of Friday, May 22, through Monday, May 25. Multicolored beacons capable of projecting light nearly six miles into the clear night sky will beam from sunset until the early morning hours. The bridge carries I-95 over the Quinnipiac River and is maintained by the Connecticut Department of Transportation.

Governor Lamont said, “Our nation’s service members put their lives on the line in order to protect the freedoms and liberties that make this country the greatest in the world, and we honor and pay tribute to each of the fallen heroes. Enlisting in the military is an incredibly selfless act, and the members of our Armed Forces risk so much in their duties. Our hearts are with every military family who has lost a loved one. They will forever have our respect and gratitude, and we will always honor their service.”

Lt. Governor Susan Bysiewicz said, “This weekend, we honor and pay tribute to all of our fallen heroes who never left the battlefields. Our state and country owe a great debt to the heroic men and women who served to hold our flag high. It’s because of their ultimate sacrifice that we all have the freedom to speak out, to choose our leaders, and the right to religious freedom. On behalf of the State of Connecticut, thank you to all of our military personnel for the sacrifices you have made for our country.”