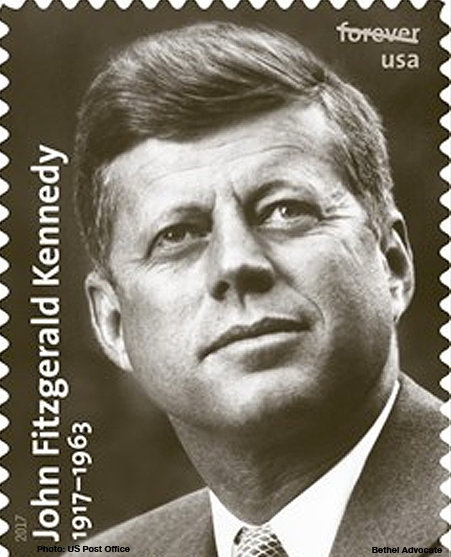 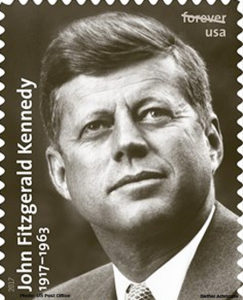 The stamp features a 1960 photograph by Ted Spiegel of Kennedy campaigning for president in Seattle. The artwork accompanying the stamp, showing Kennedy in a reflective pose, is a 1970 oil painting by Aaron Shikler (courtesy of the White House / White House Historical Association). As today is a national holiday, the Forever stamp is only available at the event. It will be available nationwide in Post Offices February 21. Customers may order the stamps now at usps.com/shop.

“Today, representing the 640,000 men and women of the United States Postal Service, I can tell you that the spirit of public service remains as vital as when President Kennedy elevated the ideal in his moving and eloquent first inaugural address,” said Brennan. “He dignified and gave voice to the pride in serving the nation that every postal employee feels. It is for this reason that the Postal Service takes special pride in honoring President Kennedy today.”

“In the American people he served, President Kennedy discovered a fearless optimism and extraordinary empathy. Despite divisions and differences, he believed every citizen shared an unbreakable, common bond to push an imperfect country towards justice and progress. This stamp will not only commemorate the centennial of his birth, but the values that make this country strong, fair and kind,” said Congressman Kennedy. 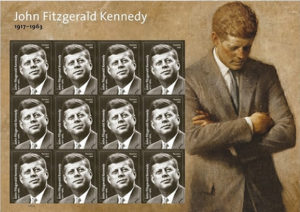 The Iconic Photograph
“The photograph was taken Sept. 6, 1960, in Victory Square, Seattle, adjacent to downtown’s Olympic Hotel,” recalled Spiegel, describing his iconic photograph captured nearly 57 years ago. “Senator Kennedy was in the first week of his campaign for the presidency: his itinerary was nation spanning — Maine to Alaska. Seated by the podium from which he would deliver his first speech in Seattle, he was looking up at office building windows crammed with cheering supporters. It was a highly energetic moment and one could sense Kennedy subsuming the place and people surrounding him. Soon he would address thousands at Seattle’s Civic Auditorium.

His remarks closed with these words: ‘I have called the challenge of the future the new frontier….my call is to those who believe in the future….I want you to join me….give me your help, your heart, your voice….and this country will move again.’

For me this photograph captures Kennedy sensing his responsibility to the public’s response.”

Kennedy’s Legacy
As the nation’s 35th president Kennedy remains for many a captivating and charismatic personality — one who appealed to the nation’s higher ideals and inspired young Americans to engage in public service.

On Jan. 20, 1961, Kennedy, at age 43, became the nation’s first Catholic president and the youngest person elected to the presidency. In his Inaugural Address, he famously called upon Americans to “ask not what your country can do for you — ask what you can do for your country.”

In the early months of his administration, Kennedy announced his signature initiative, the Peace Corps, to aid people in developing nations. In May 1961, Kennedy announced the bold goal of landing a man on the Moon before the end of the decade, setting the nation on the path toward achieving the historic Moon landing in 1969.

During the height of the Cold War, Kennedy confronted the Soviet Union in a series of conflicts that could have escalated into a major war. During the summer of 1961, for example, he defended the status of West Berlin, a small pocket of freedom within Soviet-supported East Germany, when it came under threat from Soviet leader Nikita Khrushchev.

Kennedy opposed Khrushchev again in the fall of 1962 after Soviet forces installed nuclear missiles in Cuba. Against the urging of his military advisers to bomb the missile sites, Kennedy decided on a naval quarantine to prevent further shipments of military equipment to Cuba. After suspenseful days in which war appeared imminent, Soviet ships heading to Cuba turned back, and Khrushchev agreed to remove the missiles.

On June 11, 1963, Kennedy made an impassioned speech on civil rights that characterized the unequal status and treatment of blacks in America as a moral crisis. He then submitted a bill to end racial segregation, which in substance was passed after his death as the landmark Civil Rights Act of 1964.

Kennedy was assassinated Nov. 22, 1963, in Dallas, Texas. His death at age 46 left the nation grief-stricken, all the more so because of the unrealized potential of his presidency. 5-cent First Class Kennedy Memorial stamp issued May 29, 1964. The quote is from Kennedy’s 1961 inaugural address, “… And the glow from that fire can truly light the world.” The Postal Service receives no tax dollars for operating expenses and relies on the sale of postage, products and services to fund its operations.