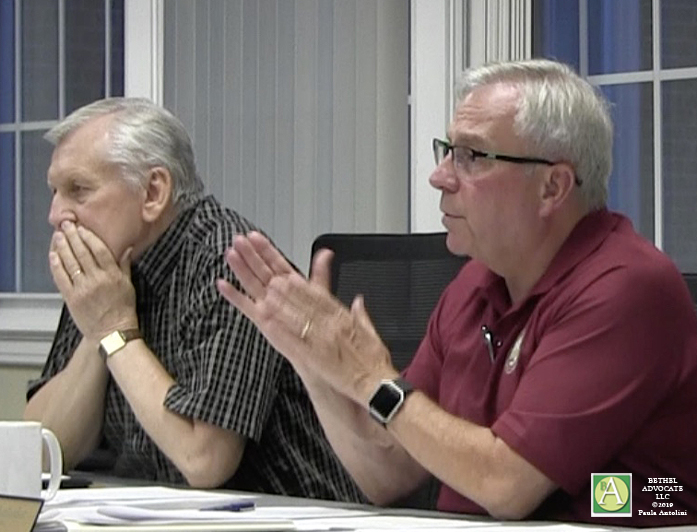 We will be publishing a full report with photos and videos shortly, of the August 6, 2019 Board Of Selectman meeting regarding a discussion about religious displays on public property in Bethel, CT. Meanwhile, in a surprising development this morning, it came to our attention that Bethel First Selectman Matthew Knickerbocker posted a rather lengthy comment this morning, pertaining to last night’s topic of religious displays, but ONLY posted the message in one of the local Facebook forums that does NOT reach all of the residents of Bethel.

The final decision from the Board of Selectman meeting last night was tabled to a later date regarding this controversial topic, so additional details from Knickerbocker are greatly appreciated and should be able to be accessed by all residents especially regarding a controversial topic that has heated up since the holidays last year when an Atheist sign/banner controversy erupted. At this time there are no similar posts by Knickerbocker on the town website, town Facebook page or other social media, or any messages sent directly to residents, regarding religious displays. Bethel Advocate has provided a view of Knickerbocker’s comment in full at the bottom of this article.

Knickerbocker’s Facebook comment (shown below was in response to a post by resident Bill Hillman regarding Hillman’s desire to install a Menorah in P.T. Barnum Square beginning with the 2019 holiday season as he is continuing to raise funds from the public to do so. Hillman asked the public to donate to his cause saying he needed only a “couple hundred” more to meet his $2500 goal. He also urged individuals to contact the First Selectman regarding this religious display. Hillman wrote, “The next part of the project is to insist on a favorable decision from the Board of Selectors (easy to degender the title).” … “Write and call Matthew Knickerbocker. Tell him it’s time to add a Hanukkah celebration to the town winter festivities.”

According to First Selectman Knickerbocker’s Facebook comment, he had urged Hillman to wait until a final decision was made about religious displays before Hillman spent any funds on his project. Knickerbocker wrote, “I wrote to him privately to remind him that at this time, the Town of Bethel has not yet adopted any policy that either allows or disallows religious displays. I further advised him, as a courtesy, that until the policy issue is resolved, my opinion was that he should not solicit funds or spend money until the issue is resolved and a policy is developed.”

We contacted Bill Hillman and he said he has already has ordered the Menorah and a mounting base at a cost of $1600 plus about $100 in expenses so far. “I’m hopeful the BOS will continue the winter tradition. Can’t really speculate on what if’s,” Hillman said. So, despite Knickerbocker’s advice to wait, Hillman has moved forward with his plans to install the religious display.

Referring to Hillman, Knickerbocker wrote, “He has apparently decided to continue at his own pace and employ public pressure to force us to make a decision that conforms with his schedule. While I appreciate the sense of urgency, we will not be pressured by an imposed deadline.”

Note to all readers:

Yes, it is true that the BOS tabled the issue for more legal research: There are specific questions that arose from the display committee’s report that must be vetted before the Board can make a decision. The Board asked the Town Attorney to research the proposals Chairwoman Heslin presented and report his opinions back to the BOS.

People are always welcome to contact my office to share thoughts and opinions, I welcome them. But while I greatly appreciate Mr. Hillman’s efforts to arrange for a significant addition to our holiday traditions, I would like him and all others to know that the Board has an obligation to all citizens of this town to do our homework, and do it right the first time.

I would also like readers to know that when Mr. Hillman first posted his funding plan on this social media site, I wrote to him privately to remind him that at this time, the Town of Bethel has not yet adopted any policy that either allows or disallows religious displays. I further advised him, as a courtesy, that until the policy issue is resolved, my opinion was that he should not solicit funds or spend money until the issue is resolved and a policy is developed. He has apparently decided to continue at his own pace and employ public pressure to force us to make a decision that conforms with his schedule. While I appreciate the sense of urgency, we will not be pressured by an imposed deadline.

I do not think there is a full enough understanding of what is at stake in this issue. Anyone reading this can easily Google the question and find hour after hour after hour of reading material on a half-century of complex, highly nuanced federal and state court decisions. If the Board of Selectmen get this policy wrong, every person reading this must understand your tax dollars WILL BE SPENT on legal fees. That may not be fair, and that may not be what people want to hear, but it is a 100% predictable fact.

The Board of Selectmen must make a decision, and it comes down to one of only two options:

Option #1). Religious displays will be permitted on public property.

If this policy is chosen, it means ALL displays, both religious and non religious holiday messaging, will be placed (as long as they meet the other requirements for any use of town property, such as sponsored by a local resident, insurance coverage, etc.). This is more complicated than it seems, because it means that holiday messaging that some deeply religious people find offensive might also be displayed at the same time.

This is the key point. Unless the town attorney can find reliable evidence to the contrary, the Board of Selectmen will have NO RIGHT to deny or censor a display because it bears the word “atheist” or “satanic.” We will have NO RIGHT to tell another group that they have to put up their display somewhere else or during some other season. This is truly an “all or none” proposition. Please think about that carefully. This is a long-established legal concept. If public property is to be used by any person or group, government then has no legal right to censor or restrict that use based on the beliefs of the person or group who want to use the property.

As an example: Many years ago the Board of Ed office was contacted by a some citizens who asked that the town not allow the Boy Scouts to hold troop meetings in our schools or town hall because (at that time) the Boy Scouts of America did not allow gay troop leaders in their organization. The town was advised by counsel that as long as the town allows other citizens and groups to use public property, it has no legal right whatsoever to deny use of property on that basis. Exactly the same law applies in the issue of displays on town property.

Option #2). Do not permit any religious displays on public property.

These are effectively the only two options before us. Both create their own controversy. Both of them will require people to accept that a long standing cultural tradition will change. It is unavoidable.

The members of the Board of Selectmen, like all public servants, take an oath of office in which we swear to “..uphold the Constitution of the United States of America and the State of Connecticut.” Both of those foundational documents speak to the freedom to practice religion. But the courts have consistently found that there is also a duty to respect other citizens desire to be free FROM religion, if they so choose.

Your government cannot be in the position of picking and choosing which messages might be offensive. Nor will I, as your chief elected official, knowingly recommend a policy that with nearly 100% certainly will swallow many tens of thousands of your tax dollars in legal defense when we have so many other needs to attend to in our town.

The Board of Selectmen will continue to study this issue and do our best to get it right. If that fits with Mr. Hillman’s schedule, great. If not, that is his risk, not ours.

Thank you for reading.