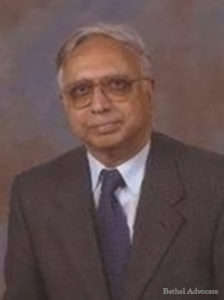 We are sad to announce the passing of Dr. Dunstan Pulle, husband of Bethel resident Frances Pulle.  Frances Pulle is also a frequent contributor of editorials to Bethel Advocate. Our condolences to Frances Pulle and the Pulle family. View obituary below.

Dunstan “Dan” Pulle, whose devotion to his patients was eclipsed only by his love of family, died on May 31, 2017 while on vacation in Croatia with his wife Frances. He was 80 years old. Born in Colombo, Sri Lanka, Dunstan was the oldest of five children, and a proud graduate of St. Joseph’s College and Colombo Medical College. He came to New York in 1968 where he began a long and distinguished career as a physician, specializing in pulmonology and elder care.

He is preceded in death by his parents, Marshall Fernando Sylvester Pulle and Grace Arasaratnam Pulle, and his sister, Josephine Mary Pulle. He is survived by his wife, Frances Pulle, his daughter, Theresa Pulle Chociey, his son, Matthew Pulle, his five grandchildren, Maxwell, Isla, Ashley, Nora Cate and James Dunstan, by his three brothers, Stanislaus Pulle, Christopher Pulle and Austin Pulle, his nephews, Julian and Mikhail Pulle, and his niece, Roshani Pulle.

A devoted Catholic, Dunstan attended Mass every week, and prayed the rosary every day. Even on vacation, he made sure to find a local Catholic church where he could make Sunday Mass. Dustan’s faith was the foundation of his life. It propelled his love and service to God, his family, and his profession.

Dunstan found immense fulfillment as a physician, and practiced medicine up until his death. Even after hours, he was always able to talk to patients, who sent him thoughtful, and sometimes elaborate, presents every Christmas as a show of their gratitude. He held the respect of his colleagues as well, who regularly sought his advice when deciding how best to treat their own patients.

As much as Dunstan enjoyed being a doctor, nothing and no one came before his family. Several times a year, he flew to Southern California to spend time with his brothers. These trips were a source of deep joy to him. Dunstan also dearly loved Frances, his wife of nearly 46 years, and his two children, who never stopped trying to emulate the goodness of their father. Dunstan had a special place in his heart for his five grandchildren. They always brought out his warm and gentle smile.

There are no calling hours.

The Cornell Memorial Home, 247 White Street, Danbury is in charge of arrangements. To light a candle of hope and remembrance, please visit www.cornellmemorial.com