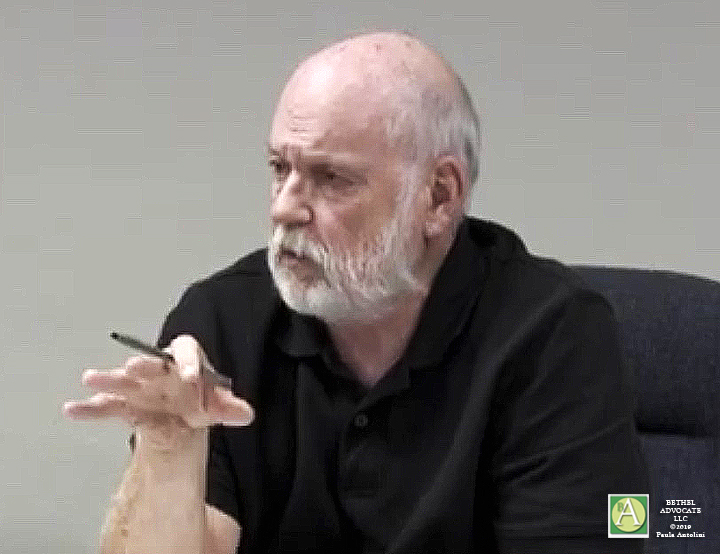 The 8-30g Goodhill Road controversy in Bethel all boiled down to a war about the soil scientist reports.

The Commission Chairman Don Goodrich said they had too many reports, yet Attorney Alexander Copp, who spoke to the Bethel Advocate on behalf of the Applicant Tim Draper, after the decision was rendered, said that he’s never seen an application turned down for too many reports, it is usually too few reports.

The 1 3/4 page “DENY WITHOUT PREJUDICE” draft of the final motion was already typed and ready even before the final presentation of Steven Danzer’s soil report was made to the Commission by Attorney Casagrande, who was representing the neighbors, and before any Commission vote had taken place.

In his final statement of a decision, 22 minutes into the meeting, Chairman Don Goodrich stated in part:

“I will make a statement as Chairman. I’ve been on this Commission for 24 years. I’ve been Chairman for 12, and this is probably one of the most difficult and complex applications I’ve ever had to process that I’ve ever, ever had to deal with.” …

“We have received a lot of material in this application. I’ve had a chance to go over some of it in detail, some of it very briefly. But the most overriding aspect is the fact that we have different soil scientists with two completely, very conflicting opinions as to what is going on. And whenever we deal with cases like this, the Inland Wetlands Commission brings in a third party from Northeast Conservation Services to review all soil scientist reports and that will take time, which we don’t have.”

“I’m not in any way criticizing or denying any of the information that’s been given to us. It’s been given to us by experts and we have three soil scientists licensed by the State of Connecticut. So you can’t say one is better than the other, one knows more than the other, whatever. It is just a too complex of a situation.” I’ve been thinking about this all weekend. I’ve been sleepless most of the weekend. And In think the only fair way to deal with this situation is that I have asked the staff to draw up a resolution of denial without prejudice and I will present that tonight to the meeting, to the Commission, to the applicant and to the neighbors.”

Don Goodrich then opened the floor to the Commission for questions.

Commissioner Patrick Perrefort mentioned past discussion and said, “I know a lot has been discussed about the wetlands and the flow to the wetlands to the west and north, just so to prepare the applicant if he does wish to resubmit, just so you know what my mindset is.”

Perrefort said, “I don’t think we’ve ever approved an application that required an adjacent property owner to make adjustments to their property and I believe the way it is designed right now is that wall, it would require, I don’t know the address of that center property, to have to do some type of work or consideration to his own property, and I have a concern with that. I wanted to make sure the Applicant knew that before.”

Goodrich stated, “There are too many special meetings, too much information that’s conflicting for us to come up with a total positive decision one way or the other, so that’s why I’ve asked for the denial without prejudice for the following reasons.”

Chairman Goodrich then read off a pre-printed 1 3/4 page document citing reasons for the denial in detail (view entire document below).

Reasons given (in part) for the *denial were:

*See full motion in images below. (Excuse the wavy copy, we could only obtain a wrinkled paper.)

If the Drapers want to resubmit an application the final decision states certain parameters such as, a third party consultant will be retained by the Inland Wetlands Commission, and, the Commission, Land Use Department and Staff and their consultant(s) shall have uninhibited access to the property relating to the application. (Read page 2 of final motion shown above.)

Agent McCollum distributed a packet to the Commission containing the following:

Mr. Mazzucco spoke on behalf of the Applicant and addressed plan changes.

It was expected to be a meeting that would allow a presentation of a final report by the soil scientist Dr. Steven Danzer, who was hired by the neighbors Mr. Ryan Cornish and Mrs. Kristin Giron (also in the “Just Say No,” group) but who could not appear at the September 23rd meeting.

However Dr. Danzer was not at the September 30th meeting either, due to his observance of the religious holiday, so the neighbors group hired Attorney Dan Casagrande to represent them and to present Dr. Danzer’s report, which took approximately 12 minutes.

Attorney Cassagrande spoke on behalf of the neighbors, Mr. Ryan Cornish and Mrs. Kristin Giron, who requested an independent environmental review be conducted.

Attorney Casagrande reviewed Dr. Danzer’s report with the Commission. Dr. Danzer’s opinion is that the project, as it is currently proposed, will have a reasonable likelihood of unreasonably impairing the natural resources, wetlands, and watercourses due to an alteration of site hydrology due the substantial ( 33%) decrease in watershed area that currently supplies surface flow to the wetland.

Attorney Cassagrande- also informed the Commission the residents of Good Hill Road previously requested the Applicant grant an extension and was denied by the Applicant. He stated the prudent course of action was to deny the application as incomplete and allow for re-submittal and a Public Hearing.

Applicant Timothy Draper’s wife Laurel Draper said she had constant trouble interacting with Beth Cavagna regarding this project. Mrs. Draper said that Cavagna did not return four phone calls in a row for instance, even though Cavagna has all her contact information.

In #3 of the final decision, the Commission states that the Applicant posted “No Trespassing” signage in multiple locations on the property and said “the Commission’s ability to effectively render a decision has been compromised.”

Cavagna stated at the Sept. 30th meeting, “I went out to the site and ‘No Trespassing’ signs were posted, newly posted. I did not enter the property. It has happened before with the Applicant.” … “I received an email on a previous application, I think it was 49 Taylor, that ‘No Trespassing’ signs were posted and that of anybody wanted to go on the property to let you know (looking at the applicants]. And this time there was no such thing posted like that so … I did not feel comfortable entering the property because I didn’t receive the normal correspondence that I received in the past.”

Attorney Alex Copp, representing the Drapers, said, “It is highly irregular to deny something without prejudice in any sort of land use body. I’ve never seen that. I don’t have the same experience as Mr. Marcus [Attorney Neil Marcus for Drapers] but I have not seen that, certainly did not expect that, wouldn’t think that would happen here, and clearly the decision was pre-planned by multiple individuals and one certainly does not expect that as a lawyer coming in, and as a professional coming in, to do a presentation. So clearly it was planned and clearly the intent was to say, ‘well there’s too much information coming at us,’ which is what the Commissioner was trying to present. So we need to go and get an independent third person no matter what was presented tonight. “

“What their view tonight, that I saw, is that they have ‘too much information’ not ‘not enough information,’ ” said Copp. “We had two experts, they [neighbors] had one expert, so rather than go through the particular experts, and it may be difficult especially for non-professionals, I get it, but rather than going through those two experts and working through those issues in pubic, they [Commission] had a pre-planned decision basically.”

Copps does not agree with the Commission that there were legitimate “conflicting conclusions” to the reports. He feels the other report uses language like “reasonable probability” … “He’s using the lowest possible language he can, to make a conclusionary opinion to convince lay people, no offense, people that volunteer their time here, to throw up their hands and say, ‘Well I don’t really want to take the time to go through this, I’d much rather approve a motion that was pre-written’ and just say let’s get our own person and let’s look at it.”

Mr. Copps said the point of a meeting is that you are supposed to work out all the facts in public, as in the soil sample reports, but this was not done. Instead there was a pre-written motion.

The next step is to go to court to appeal, Laurel Draper said. “We’re going to have to because they pushed us into that decision,” Mrs. Draper said.

Mr. Tim Draper said he thought it was “Personal.“

Ethan Draper, son of Mr. & Mrs. Draper, said, from his observance of meetings, “It seems as if they are making decisions off of emotions because there are so many people against this project. So in their opinion are they going to decide from the general mass or the little guy, the small business owner?” … “It seems like they are being very biased and siding with the public, without taking in the facts because they say it’s too many facts Are there going to be more facts? It doesn’t make sense to me.” … “This is very unprofessional.”

When asked if he would consider building several homes on the property instead of the multi-unit structure, Mr. Draper said, “No.” … ” Why should I have to go backwards? Which I won’t. We have a viable plan that works, okay, and backing up to a condominium complex.” … “So why wouldn’t this be in a good area? If you throw a rock far enough you have Bethel Woods on Nashville Road, and throw it a little bit harder, you have another subdivision that was done under 8-30g on Nashville Extension by another local developer who’s doing another 8-30g on Chestnut. But because there’s personal reasons involved, thats, I’m telling you, where it starts here.”

Scott Odemann, who created the protest website “JustSayNo” commented: “I appreciate that the petition was denied but I think that if someone is asking officials permission to do something as monumental as building structures to house human families and they can’t submit accurate site plans and/or don’t know or care about getting permits before beginning work, everything should be denied on principle alone. I was told that the developer is only renting the bare minimum of units as “affordable” with the rest at the market rate which only adds to the stench this situation emanates.”

VIEW MORE PHOTOS OF MEETING BELOW: