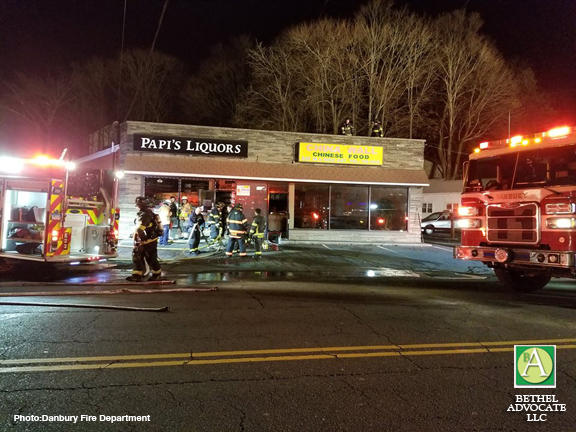 Shortly after 6pm units were dispatched to Bells Place for a reported structure fire. Upon arrival Engine Company 22 had visible smoke showing and confirmed a working fire. After further investigation an active fire was found in the basement of the end unit in a six unit building with extension into the adjacent unit.

First arriving companies were able to quickly knock down the fire and salvage most of the Christmas gifts before they were damaged. Members of the Danbury Fire Volunteer Council were also working on some additional gifts for the children affected with their recent toy drive.

While units were in the process of picking up from the fire on Bells Place a second call for a fire was received. Units were sent to the area of 72 Lake Ave for a reported fire in a restaurant. Engine Company 23 was the first arriving unit and found heavy smoke coming from China Wall restaurant and confirmed a working fire. The companies at Bells Place all relocated to Lake Avenue bringing together another 2nd alarm response. Fire extended into the cockloft above the restaurant but was held to the unit of origin. Danbury Fire Marshal’s office was requested to the scene and is investigating. One restaurant owner was transported to Danbury Hospital Center by ambulance for a minor burn. The adjacent store, Papi’s Liquor, was able to be re-occupied.

Its nights like this that make us all realize how hard our dedicated first responders and City Departments work to keep our city safe. This evening was a true reflection of the teamwork from our career and Danbury Volunteer Fire Department, City of Danbury Police Department, Western Connecticut Health Network Danbury Hospital EMS, City of Danbury Building, Electrical, Health, Water and Public work departments. Every agency quickly pulled together to keep damage to a minimum and assist our residence in a time of need. Also, thank you to Bethel Fire & EMS and Brewster Fire Department for the mutual aid assistance while all Danbury units were operating.