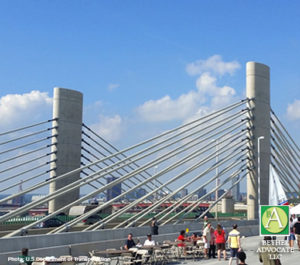 “By commemorating the lives lost at Pearl Harbor in 1941, this bridge has been a powerful symbol of American perseverance since 1958.  With the latest enhancements, it’s also a powerful example of the role played by the Highway Trust Fund and other federal resources.

“It’s also something of a rarity, in engineering circles. The new bridge is an “extradosed” cable-stayed bridge, the first of its kind in the United States. In fact, there are fewer than two dozen such bridges worldwide.” –U.S. Department of Transportation

(HARTFORD, CT) – Nov. 16, 2016 – Governor Dannel P. Malloy is congratulating the Connecticut Department of Transportation (CTDOT) for earning the Grand Prize at the 2016 America’s Transportation Awards competition in recognition of the agency’s successful work on creating the new Pearl Harbor Memorial Bridge in New Haven. The state was honored with the top prize in the national competition, which attracted a record 84 project nominees from 39 state transportation departments plus the District of Columbia.

“The newly constructed bridge is a landmark in Connecticut. Completed ahead of schedule and under budget, it is a truly remarkable accomplishment in our ongoing efforts to ensure that the residents of Connecticut have a best-in-class transportation system that boosts our efforts to grow jobs, attract new businesses, and improve the quality-of-life in our state,” Governor Malloy said. “I want to applaud the work of everyone at the Connecticut Department of Transportation on this bridge project, including all of the workers whose service on the corridor over the last several years helped deliver one of the biggest infrastructure projects in our state’s history efficiently and effectively. The fact that our state is being recognized nationally speaks volumes about what projects like these mean in regards to providing commuters with a modernized transportation system.”

“This award confirms what Connecticut travelers already know – that we are committed to excellence in our bridge and highway system,” CTDOT Commissioner James P. Redeker said. “Recognition from a nationwide organization of transportation professionals is especially gratifying. The Pearl Harbor Memorial Bridge symbolizes our commitment to the best possible transportation network.”

The Pearl Harbor Memorial Bridge – informally known as the Q Bridge – carries I-95 over the Quinnipiac River and is among the most heavily traveled segments of the northeast corridor between New York and Boston, accommodating traffic volumes in excess of 140,000 vehicles per day. Completed in September 2015 under budget and eight months ahead of schedule, the bridge replaced an outdated one that was originally constructed in the 1950s. It is the central component of the I-95 New Haven Harbor Crossing Corridor Improvement Program – by far the largest and most comprehensive program ever undertaken by the CTDOT.

It is the first “extradosed” cable-stay bridge in the United States. This design allows the bridge towers to be shorter, which is necessary because air traffic in and out of Tweed New Haven Regional Airport travels directly over the bridge. It is a distinctive landmark in the New Haven skyline, designed to recall the smokestacks of a battleship sitting in the harbor. With five lanes and two full shoulders in both the northbound and southbound directions, the new bridge has significantly improved capacity on the highway.

The competition, now in its ninth year, is sponsored by the American Association of State Highway and Transportation Officials, AAA, and the U.S. Chamber of Commerce.

Additional information about the contest and this year’s entries is available at www.americastransportationawards.org. For more information on the Pearl Harbor Memorial Bridge, visit www.i95newhaven.com.