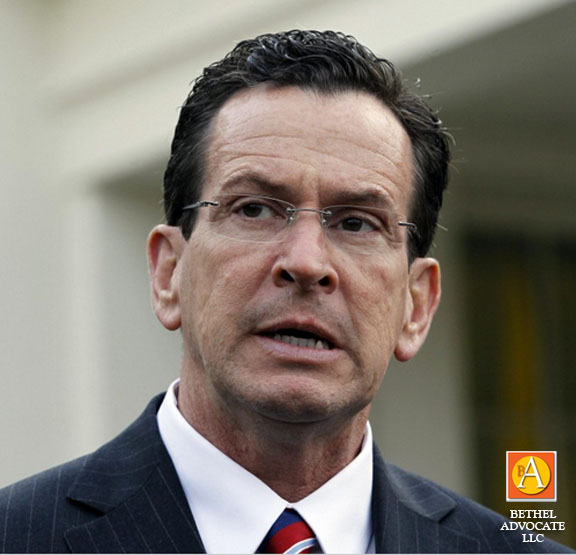 When Connecticut Democratic Governor Dannel Malloy accepted $6.5 million in taxpayer funds to pay for this 2014 gubernatorial campaign he signed a contract promising not to accept any other funds to pay for his campaign.  But despite that commitment Malloy and his political operatives funneled millions of dollars through the Connecticut Democratic State Central Committee’s Federal Account in an unethical effort to beat his Republican opponent. 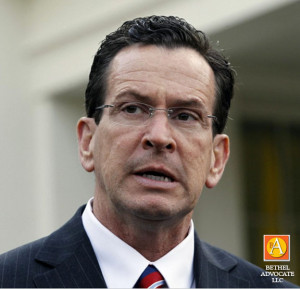 But despite that commitment Malloy and his political operatives funneled millions of dollars through the Connecticut Democratic State Central Committee’s Federal Account in an unethical effort to beat his Republican opponent.  The money that flowed through the Democratic Party’s special account included hundreds of thousands of dollars from people who directly benefited from lucrative state contracts, a move that also violated Connecticut state law.

Connecticut’s bi-partisan State Elections Enforcement Commission authorized an investigation into the illegal activities engaged by Malloy and his political operatives.

But rather than address the issues, Team Malloy have been fighting to stop the investigation.

Not only has he ducked his legal responsibilities as governor and as candidate for governor, but he is forcing the state to waste massive amounts of public funds trying to get the Malloy campaign and the Democratic Party to stop stonewalling the investigation by the Connecticut State Elections Commission.

The Connecticut State Elections Commission is hardly a partisan body.

All were confirmed by the Connecticut General Assembly.

But rather than protect the State Election Enforcement Commission’s legal responsibility to investigate what appears to be a major crime, Malloy and his political operatives continue to do everything they can to stop what is an appropriate and necessary investigation into Malloy’s campaign.

Here is the latest news coverage of the effort to stop the duly authorized investigation.

Lawyers delivered at-times testy final arguments Tuesday in a trial over whether the state Democratic Party can continue to defy a subpoena that demands emails between Gov. Daniel P. Malloy and top aides, as well as other documents relating to the party’s support of Malloy’s re-election last year.[…]Central to the case are the clean-election laws that the General Assembly enacted in 2005, after Gov. John G. Rowland was convicted of corruption for receiving lucrative benefits from state contractors. Those laws created a system of public financing of state campaigns, along with a ban on state contractors’ executives and family members contributing to candidates for state office – all intended to banish contractors’ influence from elections.According to the GOP’s complaint, state Democrats broke state law by paying for pro-Malloy mass mailings last year with about $250,000 from a federally regulated campaign account, which is allowed by federal law to accept heavy contributions from state contractors. Republicans said the expenditure on the mailings illegally circumvented the state ban on contractors’ contributions.In court Tuesday, Golub reiterated past assertions that the Malloy mailers must be considered “federal election activity” – which federal law requires be paid for out of the federal account, he said.“Federal election activity” is what Congress has decided “can influence the outcome of a federal election,” Golub said – adding that the mailers fell into that category because, even though they were dominated by photos and praise of Malloy, they included wording that urged people to vote, told them where polling places were and provided a phone number to call for a ride to the polls.Those voters could also vote for candidates for federal office – in the person of Democratic candidates for congressional seats who were on the same ballot with Malloy. Thus, Golub has said for weeks, the get-out-the-vote language on the pro-Malloy mailers could have affected the outcome of federal congressional elections. It didn’t matter that the pro-Malloy mailers didn’t contain the names of any of those congressional candidates, he said.However, Osborne said the state and federal laws aren’t incompatible, as Golub claims, and that it might have been possible for the Democrats to comply with both. She asked Robaina to uphold the SEEC’s authority under state law, as “the election experts,” to “carry out a meaningful investigation.”Her comments echoed what she wrote in a recent legal brief: “The far-reaching implications of [Golub’s] argument cannot be overstated; if the … pre-emption claim is permitted to prevail, in every election in Connecticut where there is a federal candidate on the ballot, which is every two years, the SEEC’s authority to regulate contributions to state candidates will be effortlessly circumvented,” Osborne wrote. “Such a conclusion will reverberate through state elections and even beyond the borders of Connecticut.”[…]Golub said that although U.S. Supreme Court decisions generally give deference to subpoenas from regulatory agencies such as the SEEC, they make an “enormous exception” in cases where a party organization’s First Amendment rights to associate politically are threatened.In such cases – and he said this is one – the regulatory agency needs to make a detailed “showing of need” that goes “beyond just a general suspicion,” Golub said. He said the subpoena seeks two full years’ worth of internal party communications that could cover strategy and internal operations, as well as the names of people who solicit money to operate the party and expand membership, adding that information is constitutionally protected.But Osborne disputed him, saying emails are often the source of information about improper activity, and the party shouldn’t be able to withhold them because they may be “embarrassing” on a personal level to those who wrote them.In 2014, Connecticut taxpayers funded more than$33 million in campaign grants to state candidates who participated in the Citizens’ Election Program on the promise that they wouldn’t accept money from state contractors. Malloy received $6.5 million through the public-financing program.

The CT Newsjunkie story on the hearing was entitled, “Attorney For Election Regulators: Dems Tried To ‘Stonewall and Stymie’ Investigation.”

An attorney for state election regulators told Superior Court Judge Antonio Robaina that the Connecticut Democratic Party was trying to “stonewall and stymie” an investigation, while an attorney for the party told him they were seeking highly confidential party communications protected by the First Amendment.Those arguments were made Tuesday in Hartford Superior Court. Robaina gave the attorneys two hours to make their closing arguments. He asked no questions. He has 120 days to make a decision, but told the attorneys he will make one as quickly as possible.Assistant Attorney General Maura Murphy Osborne, who represents the State Elections Enforcement Commission, which is seeking to enforce the subpoena against the Democratic Party said the investigation regulators are trying to conduct “is seriously languishing” due to the lack of compliance.The complaint against the Democratic Party, which spent more than $200,000 from its federal account on mailers featuring Democratic Gov. Dannel P. Malloy, was filed by former Republican Party Chairman Jerry Labriola back in October 2014.The mailers that also included a get-out-the-vote message were paid for with the party’s federal account. The federal account can accept money from state contractors. That creates a conflict between federal and state law. State law prohibits state contractor money from being used on publicly financed candidates, even though publicly financed candidates are now allowed to accept unlimited amounts from political parties.Osborne said if the party is allowed to get away with this it amounts to a “massive circumvention route” around the state’s campaign finance laws, which were adopted in 2005 in the wake of former Gov. John G. Rowland’s corruption plea for accepting gifts from state contractors.

And the CT Mirror added to the coverage in, “Assistant AG: Democrats trying to ‘stonewall’,” writing

How the Connecticut Democratic Party came to solicit state contractors, regulated industries and beneficiaries of state aid for campaign contributions in 2014 is “highly privileged and confidential,” the party’s lawyer told a judge Tuesday.David S. Golub, defending Democrats against an investigative subpoena, told Superior Court Judge Antonio C. Robaina in Hartford that the party has no obligation to disclose its fundraising strategy or internal communications.The State Elections Enforcement Commission has no right to the names of people who solicited campaign funds or the strategy for approaching donors, he said. Donors gave as much as $20,000 each in the two years prior to 2014 election, when the Democratic Party raised more than $7 million.Assistant Attorney General Maura Murphy Osborne, representing the commission, said the Democrats were trying to “stonewall and stymie the investigation.”The commission is attempting to investigate whether the party illegally supported the re-election of Gov. Dannel P. Malloy last year with contributions from donors barred from giving to state campaigns.Robaina heard final arguments Tuesday on a motion by the attorney general’s office for the judge to compel the party to produce emails, bank records and other documents subpoenaed by the elections commission.“This court should order the enforcement of the State Elections Enforcement Commission’s subpoena sooner rather than later,” Osborne said.Robaina, who gave the two lawyers free rein to spar for two hours, has 120 days to render a decision. The judge asked no questions, made no comments and gave no hint of whether he would facilitate or hobble what might be the most politically sensitive investigation ever opened by the commission.In trying to quash the subpoena, Golub made arguments aimed at ending the investigation. He is challenging the commission’s jurisdiction and accusing it of trying to reach too deeply into the inner workings of the state’s dominant political party, violating its First Amendment rights.The case is testing the strength of sweeping campaign finance reforms passed in 2005 after a corruption scandal toppled Gov. John G. Rowland: a ban on donations from state contractors, limits on lobbyist contributions and a voluntary system of publicly financed campaigns.A central issue is conflicts between state and federal campaign finance law.While Connecticut law bars state contractors from donating to state campaigns, federal law dictates the rules for raising and spending money that is used for get-out-the-vote efforts in federal election years, when state elections are also held.The result is state parties maintain state and federal accounts. They are free to deposit state contractor contributions in the federal accounts, which provide significant support for state campaigns by helping deliver voters to the polls.Essentially, the state has two sets of contradictory campaign financing rules: one provides public financing to candidates who agree to accept donations of no more than $100 and abide by spending limits that vary by office; the other allows state parties to accept maximum donations of $10,000 a year and spend unlimited amounts supporting their candidates.Malloy benefitted from both systems. He is Connecticut’s first governor to win using public financing, defeating wealthy, self-funding opponents who outspent him in the Democratic primary and general election in 2010.He was re-elected in 2014 with $6.5 million in public financing and the support of a party that financed a sophisticated get-out-the-vote machine with funds Malloy helped attract, beginning with more than $1.5 million in 2013. That was triple what the Democratic Party had collected four years earlier in the runup to the 2010 election, when it did not control the governor’s office.

Apparently laws are for the little people….

Above message shared from jonathanpelto.com