The Theater Workshops showcase student actors ages 8-18 and teach them to shine!

WORKSHOPS FOR YOUNG PERFORMERS
The Theater Workshops showcase student actors ages 8-18 and teach them to shine!

These workshops afford budding young performers the opportunity to experience many aspects of play production. They will learn vocal technique, movement, character development and scene study – with an amazing trip to New York City to see the Broadway Musical, ALADDIN or FINDING NEVERLAND, including a “Broadway Classroom” workshop and lunch at Planet Hollywood or Bubba Gump before the show! All sessions conclude on a Friday with a student performance based on Broadway musicals. 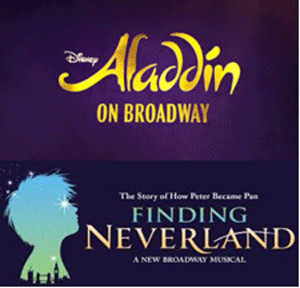 OR…. JUST A WEDNESDAY TRIP TO NYC

Chaperones, guests and extended family members may register for the field trip only! Wednesday July 8th or 29th to see FINDING NEVERLAND or Wednesday July 22nd to see ALADDIN, Including transportation, one ticket to show, enrollment in Broadway Classroom and lunch at Planet Hollywood or Bubba Gump.

Subject to availability after workshop students have been registered.

Class size limited to 25 per session…