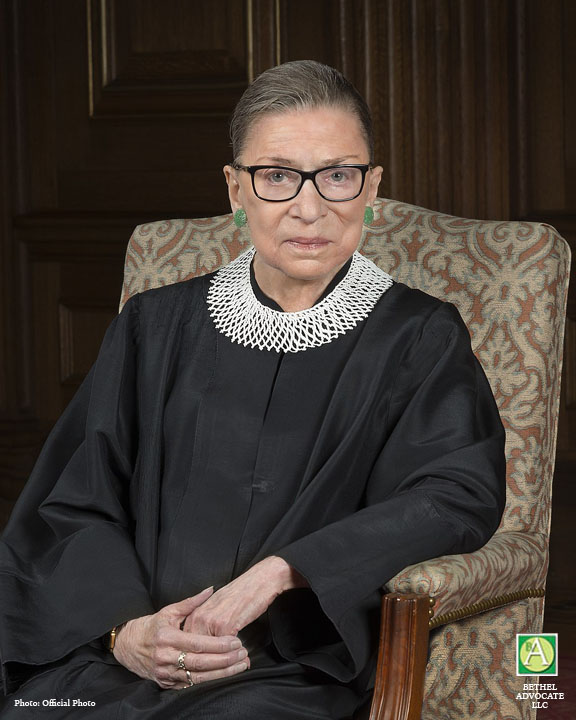 Supreme Court Justice Ruth Bader Ginsburg has died at the age of 87.

Her death was announced by the Supreme Court as complications from metastatic cancer of the pancreas.

Ginsburg died at her home in Washington surrounded by family, said the court in a statement.

“Our nation has lost a justice of historic stature,” Chief Justice John Roberts said. “We at the Supreme Court have lost a cherished colleague. Today we mourn but with confidence that future generations will remember Ruth Bader Ginsburg as we knew her, a tired and resolute champion of justice.”

“Ginsburg was confirmed to the Supreme Court in 1993 after a long legal career fighting for women’s rights. She is being remembered by people around the world as a trailblazer and feminist.”

PRESS RELEASE FROM THE SUPREME COURT ABOUT JUSTICE GINSBURG, September 18, 2020

Associate Justice Ruth Bader Ginsburg died this evening surrounded by her family at her home in Washington, D.C., due to complications of metastatic pancreas cancer. She was 87 years old. Justice Ginsburg was appointed to the Supreme Court by President Clinton in 1993. She was the second woman appointed to the Court and served more than 27 years. She is survived by her two children: Jane Carol Ginsburg (George Spera) and James Steven Ginsburg (Patrice Michaels), four grandchildren: Paul Spera (Francesca Toich), Clara Spera (Rory Boyd), Miranda Ginsburg, Abigail Ginsburg, two step-grandchildren: Harjinder Bedi, Satinder Bedi, and one great-grandchild: Lucrezia Spera. Her husband, Martin David Ginsburg, died in 2010.

Chief Justice John G. Roberts, Jr. said of Justice Ginsburg: “Our Nation has lost a jurist of historic stature. We at the Supreme Court have lost a cherished colleague. Today we mourn, but with confidence that future generations will remember Ruth Bader Ginsburg as we knew her — a tireless and resolute champion of justice.”

Justice Ginsburg was born in Brooklyn, New York, March 15, 1933. She married Martin D. Ginsburg in 1954. She received her B.A. from Cornell University, attended Harvard Law School, and received her LL.B. from Columbia Law School. She served as a law clerk to the Honorable Edmund L. Palmieri, Judge of the United States District Court for the Southern District of New York, from 1959–1961. From 1961–1963, she was a research associate and then associate director of the Columbia Law School Project on International Procedure. She was a Professor of Law at Rutgers University School of Law from 1963–1972, and Columbia Law School from 1972–1980, and a fellow at the Center for Advanced Study in the Behavioral Sciences in Stanford, California from 1977–1978. In 1971, she was instrumental in launching the Women’s Rights Project of the American Civil Liberties Union, and served as the ACLU’s General Counsel from 1973–1980, and on the National Board of Directors from 1974–1980. She was appointed a Judge of the United States Court of Appeals for the District of Columbia Circuit in 1980. During her more than 40 years as a Judge and a Justice, she was served by 159 law clerks.

While on the Court, the Justice authored My Own Words (2016), a compilation of her speeches and writings.

A private interment service will be held at Arlington National Cemetery.

Our Nation has lost a jurist of historic stature. We at the Supreme Court have lost a cherished colleague. Today we mourn, but with confidence that future generations will remember Ruth Bader Ginsburg as we knew her — a tireless and resolute champion of justice.

My wife, Virginia, and I are heartbroken to learn of the passing of our friend, Justice Ruth Bader Ginsburg. Ruth and I first met when I began my tenure on the D.C. Circuit in 1990. With the exception of the brief period between our respective appointments to the Supreme Court, we have since been judicial colleagues. Through the many challenges both professionally and personally, she was the essence of grace, civility and dignity. She was a superb judge who gave her best and exacted the best from each of us, whether in agreement or disagreement. And, as outstanding as she was as a judge, she was an even better colleague – unfailingly gracious, thoughtful, and civil.

Through her loss of her wonderful husband, Marty, and her countless health challenges, she was a picture of grace and courage. Not once did the pace and quality of her work suffer even as she was obviously suffering grievously. Nor did her demeanor toward her colleagues diminish.

The most difficult part of a long tenure is watching colleagues decline and pass away. And, the passing of my dear colleague, Ruth, is profoundly difficult and so very sad. I will dearly miss my friend.

Virginia and I will keep her family in our thoughts and prayers.

I heard of Ruth’s death while I was reciting the Mourner’s Kaddish at the Rosh Hashanah service. I thought:

a great Justice;
a woman of valour;
a rock of righteousness;
and my good, good friend.

The world is a better place for her having lived in it.

And so is her family;
her friends;
the legal community;
and the nation.

Statement of Justice Samuel A. Alito:

Martha-Ann and I were deeply saddened by the news that Justice Ginsburg has passed away. Ruth and Marty made us feel at home immediately when I joined the Court, and we will certainly miss her. Justice Ginsburg will go down as a leading figure in the history of the Court. She will be remembered for her intelligence, learning, and remarkable fortitude. She has been and will continue to be an inspiration for many.

My dear friend and colleague Ruth Bader Ginsburg was an American hero. She spent her life fighting for the equality of all people, and she was a pathbreaking champion of women’s rights. She served our Court and country with consummate dedication, tirelessness, and passion for justice. She has left a legacy few could rival.

I will miss Ruth greatly. She welcomed me to the Court with a warmth I could not have expected, and I came to feel a special kinship with her. She was someone whose wisdom, kindness, and unwavering support I could always rely on. I will forever cherish the moments we shared.

I send my deepest condolences to her children, grandchildren, and great-grandchild. I know how much she treasured and loved you. She often said that leading a meaningful life means living for one’s family and one’s community, not for oneself. Ruth lived a profoundly meaningful life, and the numerous ways in which she changed ours will never be forgotten.

To me, as to countless others, Ruth Bader Ginsburg was a hero. As an attorney, she led the fight to grant women equal rights under the law. As a judge, she did justice every day–working to ensure that this country’s legal system lives up to its ideals and extends its rights and protections to those once excluded. And in both roles, she held to–indeed, exceeded–the highest standards of legal craft. Her work was as careful as it was creative, as disciplined as it was visionary. It will endure for as long as Americans retain their commitment to law. Ruth reached out to encourage and assist me in my career, as she did for so many others, long before I came to the Supreme Court. And she guided and inspired me, on matters large and small, once I became her colleague. I will miss her–her intellect, her generosity, her sly wit, her manifest integrity, and her endless capacity for work–for the rest of my life. I give my deepest condolences to her beloved children and grandchildren. May her memory be a blessing.

Louise and I have lost a cherished colleague and friend. For forty years, Ruth served the American people as one of our most distinguished judges. Her sacrifices for the country were many, but always performed with honor. We are blessed by the happy memories that will remain, like traveling with Ruth to London where (to her delight) an uninformed guide kept calling her “Ruthie,” or all the opera she tried so valiantly to teach me, or her sweet tooth at lunch, or the touching stories of her remarkable life with Marty. We will miss Ruth and our hearts go out to her family. May she rest in peace.

Ashley, Margaret, Liza, and I are profoundly saddened by the loss of Justice Ruth Bader Ginsburg, and we extend our prayers and deepest condolences to her family and to her four decades of law clerks. No American has ever done more than Justice Ginsburg to ensure equal justice under law for women. She was a cherished colleague, and she inspired me, and all of us, with her unparalleled work ethic and devotion to the law. A meticulous and pathmarking judge, she held herself to the highest standards of precision and accuracy in her beautifully crafted opinions. And she inspired all of us to try to meet those same exacting standards. I learned from her principled voice and marveled at her wonderful wit at our weekly conferences and daily lunches. Justice Ginsburg paved the way for women to become lawyers and judges. She made it possible for women and girls like my daughters to compete on equal footing as student-athletes. When Justice Ginsburg was last in my office earlier this year, I pointed out a photo I keep of her standing with four women who served as law clerks in my chambers in my first term. As long as I am fortunate enough to serve on the Supreme Court, I will keep that photo prominently in my office as a continuing tribute to Justice Ginsburg and as a daily reminder to work hard and pursue equal justice. May God bless Ruth Bader Ginsburg.

Ruth Ginsburg was one of the members of the Court who achieved greatness before she became a great justice. I loved her to pieces.

The members of the Court always will cherish all that Justice Ginsburg meant to us as a distinguished jurist and an inspiring, wonderful person. She will have an esteemed place in the history of our Court. Ruth was a close, dear friend. Mary joins me in sending our deepest sympathies to her family.

In our court sessions and conferences Ruth was remarkably well prepared for every case, down to the smallest detail. If the two of us disagreed, it was always in a civil, principled, respectful way.

By her learning she taught devotion to the law. By her dignity she taught respect for others and her love for America. By her reverence for the Constitution, she taught us to preserve it to secure our freedom.