Bethel Advocate is pleased to bring you this latest breaking news: This morning, March 19, 2016, Connecticut State Representative Dan Carter (R-Serving Bethel, Danbury, Newtown Redding) announced that he is exploring a run for the U.S. Senate. 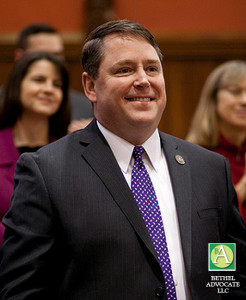 Bethel Advocate is pleased to bring you this latest breaking news: This morning, March 19, 2016, Connecticut State Representative Dan Carter (R-Serving Bethel, Danbury, Newtown Redding) announced that he is exploring a run for the U.S. Senate. “Yes indeed I am considering a run,” said Carter.  But he’s not saying much more than that right now, until everything is in place.  He is officially announcing his intent though.

Carter will be seeking the Republican nomination for Senator, which means if successful, he will run against incumbent Democrat Richard Blumenthal.

Rep. Carter has proudly joined his fellow legislators in the House and Senate to support bi-partisan legislation aimed at giving small businesses the assistance they need to grow and create jobs. He has also been very active in the fight against overspending, tax increases and initiatives that inhibit job growth.

In addition to making job creation and opposition to tax increases a priority during his tenure, Rep. Carter has fought for a variety of other initiatives. He lead the effort in supporting the “Learn Here, Live Here” proposal which allows recent graduates of public institutions of higher education and vocational-technical high schools to set aside a portion of their state income tax liability to be used in a future down payment on their first home. He has also led the efforts to help families across the state through reforms in the Family Court system.

Additionally, he led the effort to block a proposal allowing sex offenders and other violent criminals to earn credits towards early release for good behavior – a program that he continues to monitor closely and oppose.

Rep. Carter makes staying in touch with his community a priority and on several occasions has hosted a variety of in-district forums on the state budget and healthcare for seniors. He welcomes an open dialogue with constituents about everything from job creation to veterans’ affairs. He continues to keep in touch with the needs of his constituents by conducting regular office hours.

Before being elected to the General Assembly, Rep. Carter grew up in a strong community-oriented, middle class family as the son of a police officer and a nurse. He earned a Bachelor of Arts degree in political science at Bowling Green University and earned a Master’s degree in aeronautical science from Embry-Riddle Aeronautical University.

While in college, Carter joined the U.S. Air Force ROTC program – a move that eventually saw him become a C-130 “Hercules” pilot. Rep. Carter served proudly in Saudi Arabia in support of operation Desert Storm, and he also served two tours in Bosnia with NATO. Additionally, he participated in missions supporting this country’s drug interdiction program in Central America. His military dedication earned him the Meritorious Service Medal.

Rep. Carter is now an honored member of the American Legion and Veterans of Foreign Wars and also volunteers his time on behalf of the Air Force to mentor students interested in pursuing military careers.

Rep. Carter is a proud father of two.

NOTE: We received the above announcement of intent directly from Dan Carter with permission to publish same.  It was not our news media that “leaked” this information as mentioned in another news media recently, in case there is any question and just to clarify.