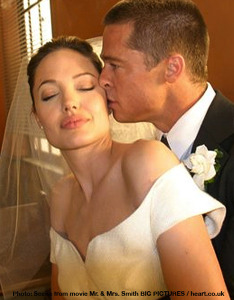 *****
Hollywood’s notable couple finally ties the knot in a marriage ceremony in France.

One of the most anticipated marriages in Hollywood took place this past weekend as Brad Pitt and Angelina Jolie were married in a small ceremony at Chateau Miraval in France.

The small wedding was attended by only close family an friends. Pitt and Jolie’s children were all part of the wedding, Maddox, 13, Pax, 10, Zahara, 9, Shiloh, 8, and twins Vivienne and Knox, 6. Zahara and Vivienne threw rose petals, Maddox and Pax walked Jolie down the isle, and Shiloh and Knox were the ring bearers.

It was very important to the couple that their children be involved in their special wedding day. “I think the important thing is that whenever we do it, that the kids do have a great time…And we all take seriously the love and the connection between all of us. But we also just get silly and do something memorable,” said Jolie, on ABC’s Good Morning America earlier this year.

Pitt and Jolie were engaged in 2012 and have been together for nine years.