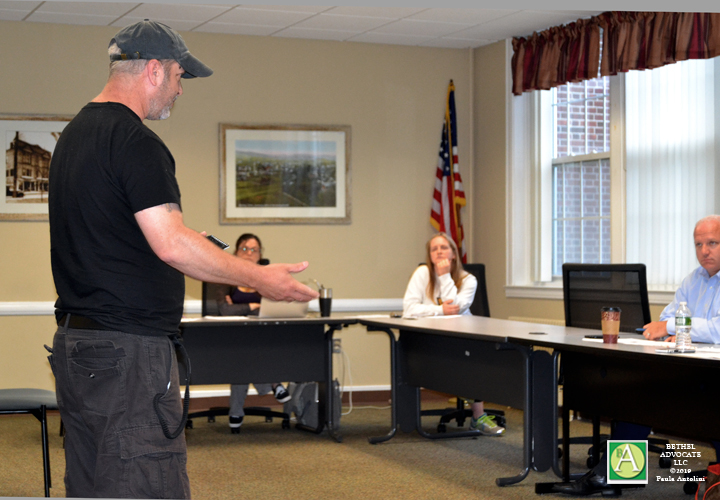 The Religious Holiday Display Committee held their second official meeting on Thursday, June 20, 2019 at the CJH Municipal Center. They had so many issues to consider that they may need to exceed the June 30, 2019 deadline put in place by First Selectman Matthew Knickerbocker to schedule more meetings. This seems to be the way it stands now with only one meeting date left on the calendar, the third meeting which is tonight at 6:30pm in Room A of the CJH Municipal Center, according to the committee discussion that took place at the meeting.

The Religious Holiday Display Committee is charged with making recommendations to the Board of Selectmen regarding a fair system of rules and regulations pertaining to whether or not to allow religious displays on public property.

There were hardly any attendees at the meeting, and also less committee members too, which is surprising considering the attention this topic got last November-December.

However, there was one strong public comment in particular that stood out, from Bethel resident Donald Borsch Jr., a fourteen-year Bethel resident, army infantry veteran, living in Bethel with his wife and raising two children. He said in part:

“I can see good people on both sides of the issue. However, I find it disingenuous that this would even be an issue, simply because when you walk into this building it says God Bless America. When we started this meeting we swore allegiance to a flag, one nation under God. Every president we have ever had has taken the oath of office on the scriptures.” … “If the argument is that we cannot have any religious display because of taxpayer dollars, well then Mr. Knickerbocker please remove that placard. Do not say the pledge of allegiance, and if you do, please omit the ‘under God.’ If there’s any swearing in ceremonies … if there’s any kind of, “I swear to do my job so help me God,’ please never say that again. If we’re going to have separation of church and state, ladies and gentlemen, Bethel-ites, then let’s have separation of church and state.” … “I find it peculiar and as I said, disingenuous, that this display, something that matters to the majority, is so horribly offensive.”

Issues brought up to the committee and/or discussed by the Committee were:

–Discussion about locations of open areas for display.

–Discussion of displays on private property.

–Policies for the community (not regulations) to advertise community events on public property, and guidelines if people abuse the policy.

–Zoning regulations and permits for signs regarding religious displays on public property.

–Whether temporary banners allowed in the town or not, on public property, and for what reasons.

–Should the “Town elders” be responsible for making decisions about displays on public property.

–Whether or not the Atheist sign from last year has to go through the Land Use office.

–Banners are not allowed in Bethel via Town rules, except for possible “temporary use” or “event” banners or flags (not the same as a display) which need a permit.

–Restrictions regarding size of banners or displays, and requirements for a time frame for removal, and rules regarding hindrance in sight lines for safety etc.

–The discrepancy between the words or images placed in public buildings or property, and words used in public ceremonies, vs. rules about religious displays on public property.

–Separation of church and state regarding religious displays on public property.

–The Constitution regarding religious displays on public property.

–Is the Nativity a religious display or does it fall under historical or cultural context due to the 40+ years it has been in that same location?

–Issues with the incorrect recording of public comments in meeting minutes, that the recorded comments do not accurately indicate the summary of what the person actually said;

–When is the public allowed to ask questions and obtain answers to their concerns;

— Where can public comments be allowed in a meeting (at the beginning or end of a meeting);

–Why is there a deadline of June 30, 2019, to complete the recommendations to the Board of Selectman from the Religious Holiday Display Committee? Why didn’t the Committee discuss or question this deadline out upon them from the First Selectman?

–Whether the Committee and BOS needs to consider the majority of resident opinion when deciding upon the issues at hand.

–Does this committee’s discussion cover all holidays for the entire year or just some holidays for part of the year (“holiday season” in November-December)? And who decides this?

–There is a need to discover the actual problem at hand to avoid “going around in circles” with discussions.

–Whether there is a hatred problem in Bethel, by a few, or a discrimination problem at all.

–Are there problems where there were none and why did controversy suddenly appear last year after 40 years of a display being present?

–Is the Committee being fair to all residents concerning the displays issues?

–Why are people seemingly fighting over the one plot of land of P.T. Barnum Square, to install religious displays?

–Whether or not physical signs need to be displayed throughout town to show our diversity or whether it is shown by people’s actions instead.

–What does respect mean regarding honoring other religious displays?

–Is the Religious Display Committee considered a “business meeting” or a “public meeting”?

We will also be posting more video shortly.