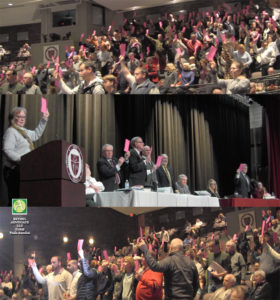 At one point in the meeting almost 200 turf field supporters shouted extra loud, screaming “no” in unison, when asked by the meeting moderator, Alice Hutchinson, to vote on the turf field being removed from the budget, after a motion was made and discussion followed.

Hutchinson also previously asked for the yes votes on the same topic too, but the vote ended up being unclear by voice response only, and needed to be taken again by asking the same questions, and tally made by hand count, instead of judging by whom could “shout the loudest.”

Photos above an below: Voters raise pink cards to keep the turf field in the budget, at the April 2nd meeting.  (Click on each photo to view larger.)

A sea of bright pink voting cards were held high above heads in the final vote on the motion to remove the turf field from the Capital Budget, which was 197 to 46 in favor of not removing the turf field.  (Official count from Tim Beeble and Nancy J. Ryan of Bethel Registrar.)  Applause followed from the turf field supporters, who all seemed to exit the meeting early, shortly after the official vote on that topic was taken in section 3 concerning turf field.

Other issues were brought up by residents.  Bill Hillman made a motion to reduce line 420 by $400,000.  “Minus $400,000 would have reduced the year-to-year increase in the budget to inflation levels and reduced the mill rate from 32.88 to 32.84. Instead of an increase to 33.04,” Hillman said, upon clarification after the meeting.

Robert Palmer, a Bethel resident and member of the Bethel Board of Finance, immediately disputed Hillman’s figures in the original motion, and as Palmer spoke, Hillman objected in a Point of Order.

“There are a lot of numbers being thrown up there and unfortunately you lose track of them as you sit here listening,” Palmer said, “especially when the speaker starts off with numbers that are just not right. The number of the tax increase that is on the table of normal tax increase is about two million dollars, which represents a 2.76%, not a 4.75%. So at the gate, when the motion has erroneous numbers….” Bill Hillman interrupted and objected, “I’m being called a liar, I cannot appreciate that,” Hillman stated loudly.  “We’re discussing alternative facts here,” said Palmer, “and the alternative fact is that the numbers being presented are not accurate and not what is being presented.”  Bill Hillman stated, “I would like to make my Point of Order.  I would like the Comptroller to validate my numbers. Line 500.” Pointing his finger to the stage, Hillmn continued, “My numbers were accurate, I was called a liar, I would like a retraction and I would like the Comptroller to validate my numbers. Moderator Hutchinson told Hillman, “You had your opportunity to speak, it’s somebody else’s turn. (View video below.)

Resident Billy Michael asked for “the real number, the dollar amount increase that Bill Hillman spoke of, and the aggregate increase in net taxes,” he said, “The 62 million to 65 million, that big chunk of money.”

Bob Kozlowski responded, “The increase in the mill rate that we’re looking at is .48 percent. The increase in the revenue from 17-18 to the current year we are in to the estimated amount of 18-19 which is 65,000,067  includes increases that represent a new construction in the town of somewhere around $800,000. So Mr. Hillman was talking about a 2.8 million dollar increase in the collection of revenue. it’s probably closer to $2,000,000 when you look at just revenue collecting on the old homes to existing homes, not the new construction.”

Billy Michael replied, “So the new construction brings in that other $800,000, to $2,800.000. I thin that’s a lot of new money to be taken out of the Bethel taxpayers, when you’ve got, what, 62 million right now?” Kozlowslu said, “Right now $62,245,000.” And you’re going up almost 3 million dollars.  And we’ve lost a million in state aid?” Kozlowski confirmed yes.  “OK so we’re going to be picking that up local, so the spending that million dollars covered now has to be paid for by our homeowners or businesses,” Michael said.   “Correct,” said Kozlowski. (View video below.)

Cynthia McCorkindale, Bethel resident and member of the Board of Finance, was concerned about cash vs. paying by credit card. “I don’t put emotions into the process of the Board of Finance, but I do think in consideration, the living conditions of people in the community.  I said it before, that there are people, I would say that, a lot of people are here tonight who can easily afford an increase, not that they’re wealthy, but it’s just that whenever it’s going to rise it’s not going to make a difference.  On the other hand, there are other parts of the community where this is a very serious problem … it’s not because people are lazy that they are not fixing their roofs, it’s because they can’t afford it,” McCorkindale said, “When you’re looking at a culture of what this town has been doing, which is bonding, you can’t just switch to a cash deal, it just doesn’t work.”

“The turf field was added back to the Capital Plan so at the same time you’re going to pay cash for the other Capital projects, now you have anther Capital project that’s a million dollars, and I will only mention this just to make a point, the police station is nine hundred thousand dollars over budget, so I just don’t understand how, in this whole confluence of events, that we can implement this velocity right now,” McCorkindale stated. (View video below.)

Resident Frank Mineo spoke about the new d=federal tax that caps what state an federal taxes can be deducted, called “an assault” he said, “and Connecticut got hit with a $10,000 cap.”  Mineo said, “There are significant people in town who are going to have to pay significantly more taxes in 2018 and 2019.”  He asked, “What considerations were taken to back where you are, increasing our expenses, increasing our mill rate, when we’re seeing less money coming from state education, and less money that we’re going to be able to deduct as part of our income taxes?”  Mineo continued, “I absolutely agree with Mr. Hillman and others, that id the Board of Selectman came in with an inflation rate increase, that’s exactly where we should be at, no higher.  I think we’re going to force people really to struggle, if we keep on increasing.”

Foster said, “I do want to make a point that all of the items that Bob Manfreda just mentioned were originally in the Capital Budget, they were seen as priorities by the selectmen, if I’m not mistaken.  And we simply, at the Board of Finance, moved them over to pay for them in cash in the operating budget. We currently have $10.5 million in short term debt, we pay roughly $200,000 a year for that in debt payment.  We could have paid for a turf field, not to bring that up at this point, but paid for that over the last ten years, twice, if we didn’t have that short term debt to pay for.  So with an extra 16 cents per thousand dollars, in our mill rate, an additional 16 cents, we get the items that are needed.”

Bryan Terzian, Bethel resident and Board of Finance member, said, “I understand why the Board voted the way they did. I was in opposition to Capital non-reoccuring for a few reasons.  One, we’re leaving out the equation of reevaluation. So to say it’s 16 cents on the mill is not telling the full story.

Greg Correard asked about the 420 account, “Is it not true that the million dollars was put into this account and all three selectman voted unanimously to have that maintained? First Selectman Matthew Knickerbocker answered yes.  It did not go back to the Board of Selectman for review, it went to the Board of Finance who then reduced it to $750,000, Knickerbocker agreed.

This is what was voted on Monday night:

The legal voters of the Town of Bethel, Connecticut and those persons entitled to vote therein are hereby notified to assemble at the Annual Town Budget Meeting to be held at the Bethel High School Auditorium, 300 Whittlesey Drive in Bethel, Connecticut on Monday, April 2, 2018 at 7:00 p.m., for the following purposes, to wit:

1) To consider and take action upon a resolution to appropriate the sum of Twenty Nine Million Eight Hundred Sixty One Thousand Two Hundred Forty Two ($29,861,242) Dollars, which sum includes debt service of Three Million Nine Hundred Thirty Nine Thousand Two Hundred Thirty Eight ($3,939,238) Dollars and the school’s building maintenance account of Five Hundred Thousand and Eight ($500,008) Dollars as recommended by the Board of Finance, as the Annual Town Operating Budget for the Fiscal Year commencing July 1, 2018.

2) To consider and take action upon a resolution to appropriate the sum of Forty Five Million One Hundred Sixteen Thousand Two Hundred Eight Two ($45,116,282) Dollars as recommended by the Board of Finance, as the Annual Board of Education Budget for the Fiscal Year commencing July 1, 2018.

3) To consider and take action on a resolution to appropriate the sum of Two Million Three Hundred Fifteen Thousand ($2,315,000) Dollars, as recommended by the Board of Finance, for capital item expenditures and further authorizing the issuance of short term notes and/or bonds of the Town of Bethel in an amount not exceeding Two Million Three Hundred Fifteen Thousand ($2,315,000) Dollars to finance the appropriation of said sum for all costs incurred for the following capital item expenditures:

4) To authorize the First Selectman and the Treasurer of the Town of Bethel to borrow on short term notes or loans “tax anticipation notes” an amount not to exceed the aggregate of Six Million ($6,000,000) Dollars for the purpose of paying current expenditures of the Town of Bethel for the fiscal year commencing July 1, 2018, which tax anticipation notes are to be repaid from anticipated tax revenues.

5) To consider and take action upon a resolution that the tax on motor vehicles and personal property be collected in one or more than one installment.

6) To establish the date on which the machine vote on the annual town budget shall take place in accordance with the provisions of the Bethel Town Charter.

7) To do any and all things which may be legally required or appropriate to accomplish the above named purposes.

Dated at Bethel, Connecticut this 23th day of March 2018.