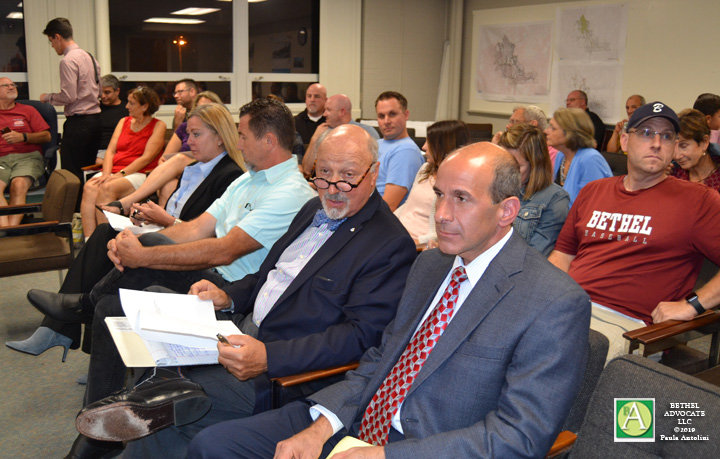 Earlier this month the battle was over a pile of dirt, now the war is over soil scientist reports and wetlands. People on both sides of the issue are fighting hard.

The project, located at 9 Goodhill Road in Bethel, CT, being proposed by builder and Bethel resident Timothy Draper, is to include a multi- family unit development consisting of 11 units with driveway parking area, drainage, and stormwater management system within Regulated Upland Review Area.

A “Just Say No,” neighbors group was created by Goodhill Road resident Scott Odmann, for neighbors living near and around the project, to protest and gather citizens to stop the project. He said, “I started the website to try and bring public transparency and light to the issue where there was none.” Odmann also said that another Goodhill Road resident, Kristin Giron “rallied everyone and helped get the word out to all.”

The builder, longtime Bethel resident *Timothy Draper, and his wife Laurel Draper, who own and operate several local businesses, and have volunteered in the town in many capacities, are fighting back claiming that the “Just Say No” group is unjustifiably singling them out.

The Drapers said, “These people posting on facebook and that website “Just say no”  are overly biased due to where I’m assuming they live. For the sole reason that they only reference the Goodhill project and not the other projects going on in our village (town).” The Drapers have named many other projects they say the group is ignoring. They believe there is misinformation out there about wetlands location on their site, building materials, water issues, health and safety issues, and more. (View our recap story and link below for a full statement).

Numerous “Just Say No” members along with Mr. and Mrs. Draper and officials, filled the room for the latest Inland Wetlands (regular) meeting, on September 23, 2019, to talk about the issues at hand.

Civil Engineer Michael J. Mazzucco, PC, representing the applicant, reviewed the revised plan of the proposed project. Mr. Mazzucco outlined the retaining wall and new pipe that has been added to the existing culvert and there was discussion about frost prevention and water flow.

David McCollum shared comments from Wright Pierce and disagreement with the lever spreader base retaining wall and Mr. Mazzucco explained those changes have not yet been made.

A letter was presented to the Commission from Steven Danzer PhD and Associates LLC, Wetland Soil Scientist informing the board he had been retained by the homeowners on Good Hill Rd and requested time at the October meeting to present his findings. A 30 day extension was requested.

Chairman Goodrich requested that Mr. Marcus consider a 30 day extension so a presentation could be made by a fellow soil scientist and reviewed by the Commission. After several comments from

Mr. Mazzucco and concerns with the request the board asked for a 5 minutes recess.

The meeting reconvened at 8: 08 pm, and Attorney Marcus reiterated that the applicant was not willing to give an extension at this time.

Public Comment was made by Bethel resident Kristin Giron (Good Hill Road address) who asked for an extension as follows:

“On behalf of Goodhill I would like to request of the Commission to ask the applicant for a 30-day extension to continue reviewing the site plan. The residents of Goodhill have hired a soil scientist, Steven Danzer, who was unable to come tonight. He has been out to the site the wetlands area on the Conte property as well as the St. Mary’s property and he has concerns and we would like to have him come to the October 28th meeting as he is pulling together a report of such findings but he wasn’t able to have that prepared for this evening. We would like an extension in order for him to come and express such findings and sit with the Commission. I have a letter from him for you.”

“With the preliminary reports that we’ve seen from the soil scientist, this plan is essentially defective on its face due to an inaccurate map of the lot and the wetlands to the west of the lot. The township and the builder, at the last meeting, we discussed that they did soil testing on the lot to the north, the Conte property number 7. No soil samples or anything were done on the property to the west of St. Mary’s property. The wetlands on St. Mary’s property not being tested, our soils scientist found an inaccuracy with the, essentially the border of the wetlands.

“I think that we should stop everything essentially where it is now until an appropriate border is found and the soil sample and the scientific findings have been essentially evaluated.

“I’m not attempting to accuse or impugn anyone in the room, but they’ve used a map that is essentially inaccurate in the site plan and I think we should look into this. Everything regarding the site to the west has not been essentially evaluated appropriately in our estimation and in our scientist’s estimation.”

Mr. Neil Marcus, attorney for the applicant Tim Draper, was asked to reply by the Inland Wetlands Chairman Don Goodrich, and said:

“It’s a pretty tough allegation against our soil scientist. But I will tell you having been on a lot of sites in the last 4 years, trying to figure out whether they are properly flagged, that two qualified soil scientists can stick their auger into the ground, pick it up, take their little chart for coloring, and spend ten minutes arguing about what the variations are. It’s not an exact science measure with real tools. So I’ll tell you that soil scientists can disagree on where the actual soil changes. I mean basically they go out, and dig there, and they look, and then they dig over here, and then they decide well somewhere in between here is the line. It’s not exact.

Mr. Marcus was asked to reply by the Chairman, and said, “It’s a pretty tough allegation against our soil scientist. But I will tell you having been on a lot of sites in the last 4 years, trying to figure out whether they are properly flagged, that two qualified soil scientists can stick their auger into the ground, pick it up, take their little chart for coloring, and spend ten minutes arguing about what the variations are. it’s not an exact science measure with real tools. So I’ll tell you that soil scientists can disagree on where the actual soil changes. I mean basically they go out, and dig there, and they look, and then they dig over here, and then they decide well somewhere in between here is the line. It’s not exact.

“So the suggestion that further work needs to be done to the west, which is the St. Mary’s property, first of all there’s no indication that St. Mary’s has consented to any of this work on their property, that’s a bit of a problem for Dr. Danzer actually. And I’m not sure that it’s going to add a tremendous amount because we are dealing only with the work that’s within a hundred feet of the review area. Quite honestly the line’s off by ten feet or fifteen feet. At the end of the day it’s not going to have a significant impact on the issues you have to deal with here.

Remember this is an affordable housing application, and the real question is, are there no accommodations that could reasonably be made to address health and safety issues?

“By the way, were going to probably close this matter this evening, because quite honestly, Dr. Danzer’s letter is a little bit scant in terms of suggesting what he intends to do, and what his timetable is to do it, and unfortunately I’ve had experience with Dr. Danzer over the years and quite honestly, I’m not sure that he’s going to do what YOU need to evaluate the site.

“Your consultants have already been out there, and quite honestly, from what Mike has presented this evening, we’ve addressed their concerns. But the fact of the matter is, just assume for a second that they determine that the wetlands line of St. Mary’s is closer to the property, were still only within the upper review area, unless they’re suggesting that somehow there are wetlands on the site, and there’s no reason to think that. You guys have been out there and in reality there’s visually no reason to think that the wetlands are on the site itself. The question really is, what benefit is there to doing this study.

“However, the good news is, that after this hearing is closed that Dr. Danzer wants to go out and redo the wetlands, he can bring those issues to the Planning & Zoning Commission because they’re the ones who will determine that the site is a threat to public health and safety. The issue is, that you need to determine what this development, as proposed, is going to have any likely impact on the wetlands. Quite honestly your question, as I was listening to it, was a good question, fabulous, belongs with the Planning & Zoning Commission.

“The fact of the matter is that this seems to be a pretense to try to raise concerns which aren’t legitimate based on just a common sense approach, to go out there and say, this isn’t a 30-acre site with pristine swamps that we’re worried about, and a natural habitat for endangered species. This is a developed residential neighborhood and this is a building lot.

“I mean, with all due respect I think that we want to design it so it doesn’t have any impact ultimately on the wetlands. And you’ve heard Mike’s presentation and we’ve talked to you about no disturbance to the wetlands and we’re doing a hydrological balance which we basically used to call zero net increase and runoff during the storm events. He’s explained it very well as to how they retain the water and discharge it.”

Chairman Goodrich made a motion, which was seconded by L. David to schedule a special meeting on September 30, 2019 at 7 pm to continue application review and suggested the neighbors submit any further material from their soil scientist at that meeting. Vote, all in favor, motion approved unanimously.

An Inland Wetlands Special Meeting will be held on September 30, 2019, at 7:00 p.m. in the Denis J. Riordan Meeting Room D of the CJH Municipal Center, 12 School Street, Bethel, CT. Discussion will continue about issues of this project but no public comment will be taken.