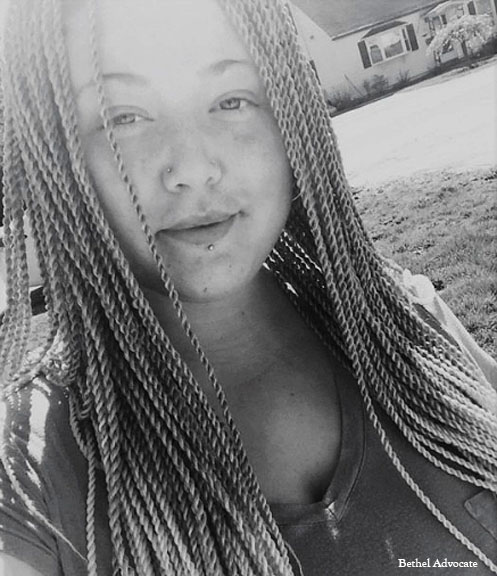 A ceremony was held on the front lawn of Molten Java on Friday afternoon, June 5, 2020, where First Selectman Matthew Knickerbocker signed a Proclamation to honor and remember all victims and survivors of gun violence, together with Jennifer Lawlor, in memory of her daughter Emily Todd. Family and friends were also in attendance.

Emily Todd was a Bethel resident who was killed by gun violence in 2018 at the age of 25, in Bridgeport, CT.

Everytown Survivor Fellow Jenn Lawlor unveiled a public artwork display in a memorial garden on the front lawn of Molten Java, 213 Greenwood Avenue in Bethel, CT, during the ceremony.

“In 2015, Everytown launched the Survivor Fellowship Program, a flagship leadership program exclusively for survivors of gun violence in recognition that survivor voices are critical to raising awareness and changing hearts and minds about gun violence.” —Everytown Survivor Network

The day also coincides with the “Wear Orange” campaign. “Orange is the color that Hadiya Pendleton’s friends wore in her honor when she was shot and killed in Chicago at the age of 15 — just one week after performing at President Obama’s 2nd Inaugural Parade in 2013. After her death, they asked us to stand up, speak out, and Wear Orange to raise awareness about gun violence.” according to the Wear Orange website.

The first Friday in June is to be National Gun Violence Awareness Day in the Town of Bethel, Connecticut to honor and remember all victims and survivors of gun violence together with Jennifer Lawlor in memory of Emily Todd and to declare that we as a country must do more to reduce gun violence.

WHEREAS, every day, 100 Americans are killed by gun violence and on average there are nearly 13,000 gun homicides every year; and

WHEREAS, Americans are 25 times more likely to be killed with guns than people in other high-income countries; and

WHEREAS, protecting public safety in the communities they serve is First Selectmen’s highest responsibility; and

WHEREAS, support for the Second Amendment rights of law-abiding citizens goes hand-in-hand with keeping guns away from people with dangerous histories; and

WHEREAS, First Selectmen and law enforcement officers know their communities best, are the most familiar with local criminal activity and how to address it, and are best positioned to understand how to keep their citizens safe; and

WHEREAS, in January 2013, Hadiya Pendleton, a teenager was tragically shot and killed; and

WHEREAS, to help honor Hadiya – and the 100 Americans whose lives are cut short and the countless survivors who are injured by shootings every day – a national coalition of organizations has designated June 5, 2020, the first Friday in June, as the 6th National Gun Violence Awareness Day; and

WHEREAS, the idea was inspired by a group of Hadiya’s friends, who asked their classmates to commemorate her life by wearing orange; they chose this color because hunters wear orange to announce themselves to other hunters when out in the woods; and

WHEREAS, we renew our commitment to reduce gun violence and pledge to do all we can to keep firearms out of the wrong hands, and encourage responsible gun ownership to help keep our children safe.

NOW, THEREFORE BE IT RESOLVED, that First Selectman Matt Knickerbocker of the Town of Bethel declares the first Friday in June, June 5, 2020, to be National Gun Violence Awareness Day. I encourage all citizens to support their local communities’ efforts to prevent the tragic effects of gun violence and to honor and value human lives.