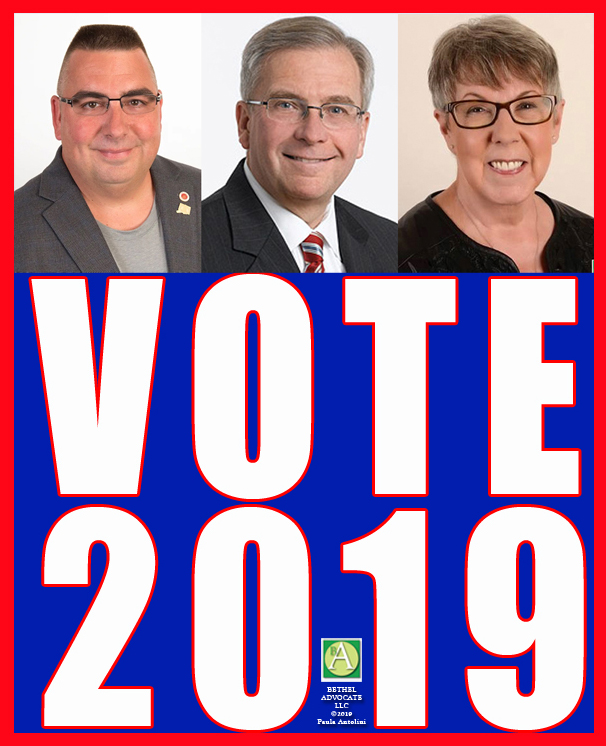 Bethel Municipal Election 2019: Are Some Bethel First Selectman Candidates Afraid to Answer Questions LIVE?; The Media Are Essential to Democracy

“The media are essential to democracy, and a democratic election is impossible without media. A free and fair election is not only about the freedom to vote and the knowledge of how to cast a vote, but also about a participatory process where voters engage in public debate and have adequate information about parties, policies, candidates and the election process itself in order to make informed choices. Furthermore, media acts as a crucial watchdog to democratic elections, safeguarding the transparency of the process. Indeed, a democratic election with no media freedom, or stifled media freedom, would be a contradiction.* “ —Ace Project. The Electoral Knowledge Network

There are numerous candidates running for office this year in the town of Bethel and among them are three candidates for the office of Bethel First Selectman.  They are incumbent First Selectman Matthew Knickerbocker (D), Pat Rist (R & I) and Bill Ochs (U).

What are the platforms of these candidates vying for the office of Bethel First Selectman and how will they improve Bethel? Will they change Bethel for the better or stay with the status quo and where do they stand on many controversial issues facing Bethel today? How will they address past mistakes? These are just some of the questions that remain unanswered.

Bethel Advocate has spent the last few months trying to arrange interviews with each of the candidates presently running for Bethel First Selectman. Would you vote for a candidate that will only agree to read prepared statements and is opposed to a simple question-and-answer forum whether it be a one-on-one interview on video or a public forum where the community can ask questions in a neutral setting conducted by a moderator?  More importantly, would you vote for a candidate that is not willing to speak to the public spontaneously about where they stand unless they receive the questions ahead of time? This seems to be the situation in Bethel with the candidates who represent the major political parties for this important local office.

Candidate Pat Rist ignored our first email on August 11th, asking for an interview and/or a candidate debate, so we sent a second email to both Ms. Rist and the Bethel Republican Town Committee Chairman Bryan Terzian on August 19th. Ms. Rist finally replied with a short message and said, “At this time, I have to respectfully decline both the interview and debate.  My schedule is very full and it will be difficult to carve out the time to participate.”

Incumbent First Selectman Matthew Knickerbocker was sent emails and text messages and also contacted via telephone requesting an interview and/or a candidate debate and referred us to David Olson, his public relations person.

Mr. Olson never replied to our August 22nd email so we emailed and called First Selectman Knickerbocker again. The last email to Mr. Knickerbocker was on September 5th asking for a response and he responded that Mr. Olson was a “business consultant” and was “away.” Mr. Knickerbocker commented he had not spoken to “Dave (Olson) or the campaign group yet” and they were planning to “discuss strategy” this past Sunday night.  We had not heard back.

Today we sent a text to Knickerbocker indicating we needed a final answer, and he replied saying he “had that schedule wrong” regarding the previously mentioned planned meeting to “discuss strategy” this past Sunday night. He then added that they held their “HQ grand opening party” [Democratic Headquarters] Sunday night and “campaign committee meeting last night.”

Knickerbocker replied, “We are going to do our own campaign videos as we have done in the past, where we solicit questions directly from voters and then do videos to address them.” He did not answer when we asked where and when the solicited questions would be posted. His final comment was, “The Q&A is not up yet. Probably not for another week or so.”

Regarding the solicited questions, they are important because IF the “solicited questions” are posted in a method where not all residents have access to the video or post asking for their questions, then it is not a very accommodating method to reach ALL voters. Also, this seems to be yet another way to have questions ahead of time, THEN make a video later, answering those questions, so in other words, not live, and not requiring immediate answers.

If this plan is similar to a previous Knickerbocker campaign video, made on September 13, 2015, by Chris Brown, where he states, “Matt has agreed to answer a bunch of questions that were sent to us through the Bethel Facebook forum,” then we saw that the video format seems to be trying to appear as if the questions were asked spontaneously, live over Skype. However, the host does not state on which exact Bethel forum the questions were originally posted that year. We do know that Knickerbocker is a member of several Bethel forums online and thus would have access to the questions ahead of time.

Is this a proper way to see what your candidate represents?

Is the choice to use only certain Facebook forums as a medium to get messages out to constituents during a campaign, a wise choice? Or is it purposely reaching only a certain group of people?

We do realize it is a candidate’s choice how they choose to run their campaign or interact with the public, but one would think they would want all exposure possible, and open communication with the public in realtime, for total transparency.

Only one candidate, Bill Ochs, immediately agreed to be interviewed and also agreed to having a public debate about his political platform and, most importantly, without being given the questions in advance.

Think before you vote. Why are candidates Matt Knickerbocker and Pat Rist reluctant to be interviewed or debate the important issues that face the Town of Bethel so that citizens can make an informed decision?  Isn’t that what democracy is all about?

We were holding off on doing Bill Och‘s interview until we received final confirmation or a refusal from the other two first selectman candidates. We think we have given enough opportunity for the other two candidates to respond, so an interview with Mr. Ochs will be forthcoming hopefully this week, depending on scheduling.

Readers should know that Bethel Advocate does NOT provide interview questions ahead of time (as one candidate requested, and the other just declined period) because we feel this is the best process to get to know the candidates, instead of a pre-arranged, printed set of answers that perhaps may or may not have been totally written by the interviewee, but perhaps created in a group effort including by their campaign staff and/or lawyer etc.

So for now, we will soon be presenting one candidate’s interview only.

RESEARCH BEFORE YOU VOTE – KNOW WHERE YOUR CANDIDATES STAND.

BUT GO OUT AND VOTE!