Legal Notices published in print newspapers for the Town of Bethel, CT. 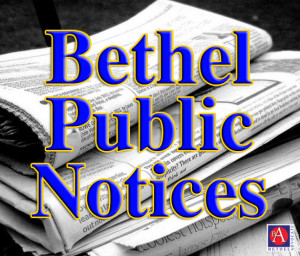 NOTICE OF INTENT TO REQUEST RELEASE OF FUNDS March 25
NOTICE OF INTENT TO REQUEST RELEASE OF FUNDS March 25, 2015 Town of Bethel, 1 School Street Bethel, CT 06801 (203) 794-8501 On or about April 2, 2015 the Town of Bethel will submit a request to the Department of Housing (DOH) for the release of up to $800,000 of Federal funds under Title I of the Housing and Community Development Act of 1974 (PL 93-383), to undertake a project known as Reynolds Ridge Senior Housing Improvements for the purpose of improvements and upgrades including the creation of two (2) ADA units, window replacement, exterior door replacement and site work. The activities proposed are categorically excluded under DOH regulations at 24 CFR Part 58 from National Environmental Policy Act (NEPA) requirements. An Environmental Review Record (ERR) that documents the environmental determinations for this project is on file at the First Selectman’s Office, Town Hall, 1 School Street, Bethel, CT 06801 and may be examined or copied weekdays between the hours of 8:30 a.m. and 4:30 p.m. weekdays. PUBLIC COMMENTS Any individual, group, or agency may submit written comments on the ERR to the First Selectman’s Office. All comments received by April 1, 2015 will be considered by the Town of Bethel prior to authorizing submission of a request for release of funds. RELEASE OF FUNDS The Town of Bethel certifies to DOH that Matthew S. Knickerbocker in his capacity as First Selectman consents to accept the jurisdiction of the Federal Courts if an action is brought to enforce responsibilities in relation to the environmental review process and that these responsibilities have been satisfied. DOH’s approval of the certification satisfies its responsibilities under NEPA and related laws and authorities and allows the Town of Bethel to use Program funds. OBJECTIONS TO RELEASE OF FUNDS DOH will accept objections to its release of fund and the Town of Bethel’s certification for a period of fifteen days following the anticipated submission date or its actual receipt of the request (whichever is later) only if they are on one of the following bases: (a) the certification was not executed by the Certifying Officer of the Town of Bethel; (b) the Town of Bethel has omitted a step or failed to make a decision or finding required by HUD regulations at 24 CFR part 58; (c) the grant recipient has committed funds or incurred costs not authorized by 24 CFR Part 58 before approval of a release of funds by DOH; or (d) another Federal agency acting pursuant to 40 CFR Part 1504 has submitted a written finding that the project is unsatisfactory from the standpoint of environmental quality. Objections must be prepared and submitted in accordance with the required procedures (24 CFR Part 38, Sec. 58.76) and shall be addressed to State Department of Housing, 505 Hudson Street, Hartford, CT. 06106. Potential objectors should contact DOH to verify the actual last day of the objection period. Matthew S. Knickerbocker, First Selectman
Appeared in: News-Times on Wednesday, 03/25/2015

OF INTEREST / OTHER TOWNS:

INVITATION TO BID Notice is hereby given that WESTERN
INVITATION TO BID Notice is hereby given that WESTERN CONNECTICUT STATE UNIVERSITY will accept bids for the following: FAIRFIELD RESIDENCE HALL EXTERIOR RESTORATION MIDTOWN CAMPUS WCSU BID NO. 2015-ERB-0288 Western Connecticut State University is seeking bid proposals for all labor and materials required for exterior renovation work to Fairfield Residence Hall’s building envelope, located on WCSU’s Midtown Campus. Generally, the scope of work includes removal of existing rotted wood cornice, replacement with a prefabricated fiberglass cornice, repairs to the built-in gutter system, replacement and painting of exterior molding and trim, stucco repair of the faÃ§ade, and lead abatement (as necessary) of existing exterior trim paint. The qualifying contractor must possess a minimum of ten years’ experience in historic preservation and restoration work. Please note: The CT Dept. of Labor’s Prevailing Wage Rates shall apply to this project. All contractors are required to visit the site and verify existing conditions. A mandatory pre-bid meeting is scheduled for Thursday, April 9, 2015 at 1:00 p.m., beginning outside of the main entrance of Fairfield Residence Hall, facing White Street. The Project Manual and project related drawings are available on the State of Connecticut’s DAS Contracting Portal. Reference Bid No.:2015-ERB-0288. Bids should be submitted on or before Thursday, April 30, 2015 by 2:30 p.m. Bids will be opened publicly at the aforementioned time in the Purchasing Office at 181 White Street, Danbury CT 06810. Bids received after that time will not be accepted. Bidders should submit bids in a sealed envelope with words, “Sealed Bid No. 2014-ERB-0288,” and the due date on the lower left-hand corner of the envelope. Bids are to be based on the work called for on the sketches and specifications for the subject project, as well as any addenda issued during the bid process. Bids showing informalities, qualifications or conditions may be rejected at the option of the University. Each bidder must note receipt of any Addenda or bulletins when submitting a bid. All bidders shall verify dimensions and conditions at the site and be responsible for satisfying himself as to all requirements of the contract. Shop drawings shall be submitted within three weeks of issuance of a purchase order or letter of intent; all work must be completed no later than November 15, 2015.
Appeared in: News-Times on Monday, 03/30/2015

NOTE: This is a list of some recent notices and is not a complete list of all notices, please check with the town of Bethel (or other towns listed) for more information.