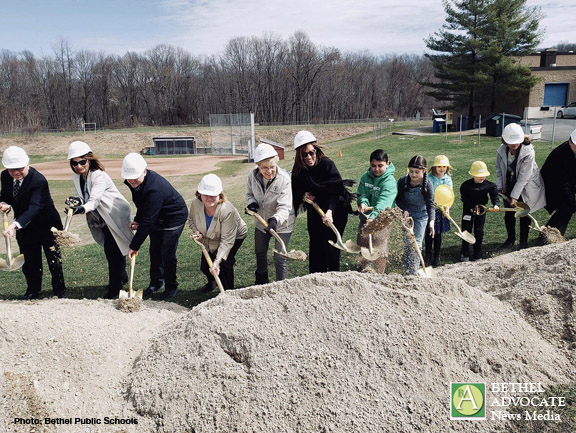 Bethel Public Schools Superintendent Dr. Christine Carver honored the former Bethel Board of Education Chairman, the late Larry Craybas, with a poignant speech and said, “Larry, always thinking of the school system, called and asked me if his daughter Terri could sit in his place and we’re not only honored by Terri but Larry’s wife Joan is here.”

Dr. Carver continued, “Your father’s laser-like focus ensuring that the children of Bethel receive the highest education was a model throughout the state. We had heard him say many times, ‘Politics at the door, we are here for the children.’ In addition he truly believed that the education system determined the economic viability of a community and that the children are our future, that we have an obligation to provide them with the highest quality curriculum, programs and learning environment, hence these schools.”

Dr. Carver said, “As many of you know, even as he was saying goodbye to me in the hospital a few weeks ago, one of the last things he made me promise is to make sure that we continue our good work in making this a top system in Connecticut. Larry, as do I, believed that this was because we have the best administrators, teachers and support staff. Although our hearts are broken through the loss of a colleague and a friend, we know that he is in heaven smiling down on us.”

Dr. Carver recognized some of the people that “made the project possible” who were in attendance. She acknowledged Representative Steve Harding and said, “He was instrumental in securing our school construction grant.”

Also in attendance and recognized were Senator Julie Kushner, Senator Will Haskell, Board of Education members, First Selectman Matt Knickerbocker, Selectman Richard Straiton, Selectman Paul Szatkowski, the Building Committee, the project architects, and members of the the Rizzo Corporation.

Several of the school children from Rockwell School, who were chosen by their peers for “rocking well,” were recognized along with Johnson school “ambassadors” who were also chosen by their peers for their kindness. “Rocking well” means caring, kindness, studying, following rules and growing together, as the school song states. The selected children were handed hard hats and shovels and took part in the ceremony.

Other speakers followed, including the new Bethel Board of Education Chairman Melanie O’Brien, who thanked the Bethel residents for approving the school renovations project. O’Brien also acknowledged Toni Boucher and Steve Harding and others who supported the project, school administrators and focus groups who “had anything to do with the design process,” also the Board of Education, The Board of Finance and The Board of Selectman under Matt Knickerbocker, she said, and also the current delegation, for supporting education. She gave special recognition to Dr, Carver and Terri Yonski who she said “were relentless in pursuit of the process.” Last, O’Brien acknowledged Larry Craybas for leading the cause of the school renovations and called him the “driving force” in the community to rally around the cause.

First Selectman Matthew Knickerbocker, said, “The old joke is it takes 20 years to do something” … “but you need a person with courage who can keep the ball rolling forward, and Larry [Craybas] was that person.” He also added, “I want to thank the Craybas family for being here with us.”

Toni Rizzo, the builder of the project responded to Knickerbocker’s earlier comment and jokingly said, “I don’t know about the 20 years, we were told we had 20 months [to build the project].” He then said he was happy to live and work in Bethel and his grown children had attended Bethel schools and now his grandchild will soon attend too,” so he is very committed. “We will make sure we deliver the dream that Larry Craybas had,” Rizzo said. “and make sure that it is done right and done properly.” He also thanked Dr, Carver, Terri Yonski and Bob Germinaro for all their efforts and also praised the Building Committee.

Rizzo said that the reason they are using the old police station as a headquarters during the project was so that they do not disturb the students or take their playing fields during the building period. “Our job is to provide as little interruption as possible,” he said. Rizzo also jokingly added, “But it was also, as I told Chief Finch, that if Ron, Ken Hunt, Ted, and the rest of the staff don’t deliver, they’ll be spending a lot of time in the cells.” This was met with laughter. “So I fully expect that they will deliver,” he added. He said it was “a team effort and not just one company that will deliver the project to the Town of Bethel.”

The groundbreaking ceremony continued with the shoveling of dirt by officials wearing hard hats and the two student representatives.

View video of groundbreaking ceremony below. (Video by the Rizzo Corporation):