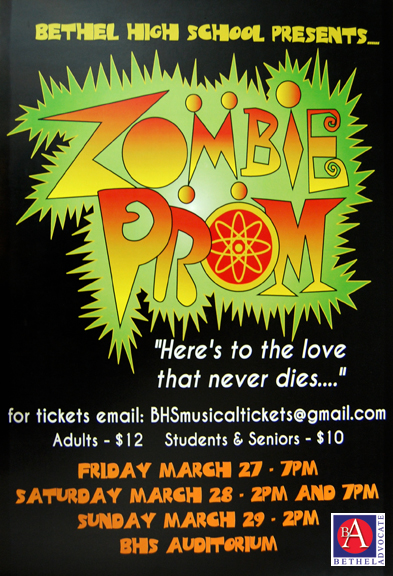 Zombie Prom is not your traditional high school production. It’s a 1950’s Grease meets the Walking Dead production and is sure to have the “wow” factor you are hoping for.

The Miracle of the Toxic Teen

Bethel High school students were in the BHS auditorium busily practicing for the upcoming play last Wednesday, March 11. (See many photos below, click on photo to view larger.)

On March 27-28-29 the Bethel High School will present Zombie Prom, which is not your traditional high school production. It’s a 1950’s Grease meets the Walking Dead production and is sure to have the “wow” factor you are hoping for.

The story opens with two teens falling in love during an air-raid drill. One is a goodie-two-shoes but the other was raised on the wrong side of the tracks.

What ensues is an unrequited love straight from a fairy tale, between Jonny Warner (Mark Tully ’16) and Toffee (Sara Rockmacher ’16).

Ms. Strict, their regimented principal (Jennifer Cote ’15) doesn’t approve of their relationship, so she does everything in her power to stop the two lovers from getting together.

The negative attention attracts Eddie Flagrante (Timothy Sheehan ’15), Expose news reporter, who just so happens to have a past with their principal, and attempts to fight for the rights of the undead teen. This hilarious show promotes such themes as equality for all and true love.

“I’m really excited for this show. We’ve been working hard and it’s set in the 1950’s so the costumes are going to be awesome. Everyone should come and see it!” said Alison Baranovic ’15 an ensemble singer in the production. 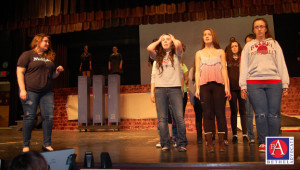 Thanks to Jen Cote ’15 for providing the above information.