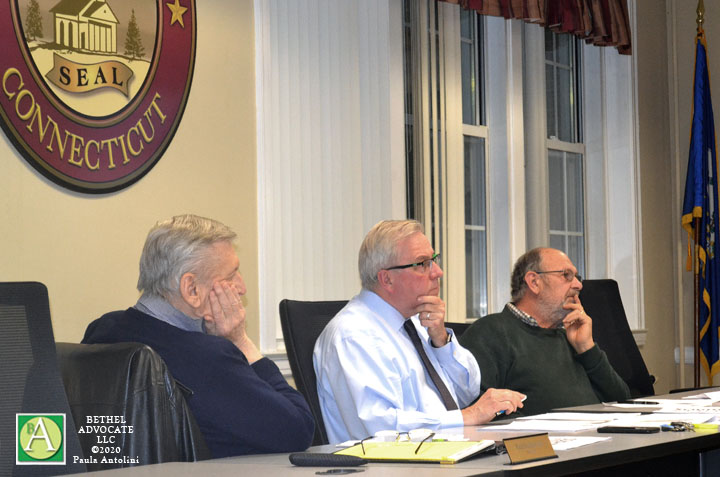 If there was ever a rumbling of an earthquake of trouble in Bethel, perhaps the last Board of Selectman meetings were it, in many aspects, including conflicting reports, complaints, and suggestions that individuals carry too much power in government, to name a few, during two Board of Selectman Meetings (special and regular) held one after the other on January 7, 2020, at 7pm and 8pm in Room A of the Bethel CJH Municipal Center, the latter covering the Bethel Town Charter approval. Special Town Meeting and Referendum dates were set and approvals of individuals named to boards were revealed.

There also remains the issue of a new aerial tower fire truck purchase being continually delayed, keeping citizens and fire fighters needlessly at risk, since the present ladder hydraulics on the aerial tower truck are non-working. Also, the Bethel Charter Revisions still needed to be approved, but may have issues to change it further, as the First Selectman is pushing for a 4 year term. The tip of the iceberg.

Attendance at the Bethel Board of Selectmen “Special Meeting” and “Regular Meeting” directly following, on January 7th, was low, considering the important topics covered.

Regarding the Board of Selectmen Special Meeting, January 7, 2020:

During public comment, Chief Scott Murphy presented a letter from the officers of the Bethel Fire Department from a meeting that was held the previous night, with nine officers in attendance. “We discussed, at length, the aerial apparatus that is failing, or has failed us, here in town,” Murphy said. “And in regards to the Bedford Hills Tower,” he stated, then proceeded to read a letter out loud: “The officers of the Bethel Fire Department do not support the purchase of a ladder truck from Bedford Hills, New York, as it is not in the department’s best interest or the best interest of the citizens of the Town of Bethel. The truck is currently out of compliance with NFPA [National Fire Protection Association] standards 1901, 1911, 1911 Annex D and 1500. The combined cost of the purchase price truck and the refurbishment to bring the truck into compliance would be an estimated $1.6 million per the manufacturer and that is he cost of a new vehicle to meet the town’s needs. In accordance to the 2013 Holsworth study it was determined that our current truck should be replaced completely with a new truck in 2020.”

The fire department has been having trouble with their aerial ladder for several years but First Selectman Knickerbocker claims his first knowledge of that was last September.

First Selectman Matt Knickerbocker reviewed the “history” of fire department requests that he said started in last season’s budget. He stated, “Both fire companies came forward with requests for aerials, different aerials. So the Board of Selectmen has been on notice that there are needs out there. I think there’s absolutely no question that we agree with that and want to proceed and make sure both of our departments have the equipment and apparatus that they need. However, the change happened in early September [2019] and this went from a priority item to an emergency item. That is when I got the note from the Chief that the current apparatus was no longer just a maintenance problem but had gone into an emergency status also.”

“So that changes the game a little bit,” said Knickerbocker, “Because if you’ve got an apparatus that can’t go out on the road, you know, we had a lot of delays for various reasons, we wanted to get this done sooner, a lot of this is my fault and has to do with personal family emergencies and we had to cancel a few meetings.”

Knickerbocker then said the BOS is setting up an ad-hoc committee, named the Fire Apparatus Committee, “To look at opportunities from Bedford Hills,” he said, “which is not a replacement for a long term solution, I look at this as a way to circumvent the 14 month timeline that it takes to build a brand new truck and try to get you something that is useable, faster.”

The temporary solution of purchasing a used truck with unknown past problems, is in the hundreds of thousands of dollars, to cover the next year, on top of the cost of an additional purchase of a new aerial ladder truck, instead of having to only pay for a new truck and order it ahead of time, if the problem was addressed before it became an “emergency” situation as it is now.

Knickerbocker said, “That may or may not work, but I want to have a committee of people who know what they are doing.“

Knickerbocker then made a motion to create the ad-hoc committee, effective immediately, but when asked for discussion, Selectman Paul Szatkowski said, “Just like our First Selectman said, we did not become aware of this until last September, and I recall our last meeting that we had with the Bethel Fire Department and we asked the Bethel Fire Department to give us some options, okay, take a look at the truck, take a look at other manufacturers, other than the manufacturer to repair it. I haven’t heard anything since.”

Szatkowski said, “I’m totally for safety, believe it or not… one of my concerns is, and I’m sure my fellow selectmen here have got the same concern too, we are going into a budget season, you know that. And we’re also coming in with a couple of debts, okay, namely the police station and the schools and renovation. We here sitting here on this committee have to take a very hard look at how we are spending people’s money. You know, 1.6, 1.8 million, whatever it is.”

First Selectman Matt Knickerbocker also said the fire department never gave the BOS the additional information they had requested from the last meeting. But in contradiction, after the special meeting ended, Chief Murphy told the Bethel Advocate he last remembers his department did submit the additional information to the BOS, however, he did not want to reveal the name of the person who submitted the material when asked.

From our past article entitled, “LIVES AT STAKE? South Street Bethel Fire & EMS Operating Without a Working Ladder Truck & Board of Selectmen Are Not Expediting or Approving Immediate Replacement“: “Even though the last BOS meeting scheduled for October 1st was suddenly cancelled with no reason given, and now on October 15th, 2 weeks later, Knickerbocker indicated that the fire department gave the Board of Selectmen (BOS) some “test reports” he said, “To be honest, I have not had time to look through this.”

How seriously can First Selectman Knickerbocker be taking this “emergency” situation if he fails to read the documents asap and it is now three months later and he is still setting up ad-hoc committees, delaying this even further, instead of listening to the research and recommendations from the individuals/volunteers who are the actual people fighting the fires and familiar with all the nuances of the equipment including repairs and updates/standards and fire calls? At the last BOS meeting in 2018 they recommended a specific brand and model of truck and reasons for that choice, etc. and reasons why NOT to choose other brands or repair companies etc.

Chief Murphy also had commented at the regular BOS meeting that the fire department had looked into a company replacing the ladder on the truck and to also to bring it up to current standards, and they were told it would run in the $775-850,000 range, and said, “They were kind of hedging on not wanting to take on the project to the point they were recommending a new vehicle totally would be more beneficial.”

Murphy mentioned that the Seagrave company purchased Baker Crane, the company that makes the ladder. Murphy said they recommend Seagrave with a “A” for safety and the truck is able to be refurbished in 15 years, and because it is a “crane-style aerial device” as opposed to what they have right now. “It can be refurbished and re-certified as new and get another 20 years out of it,” Murphy said. Seagrave is the only company where this is possible, Murphy said.

The selectmen voted upon, and unanimously approved, the 5-member ad-hoc committee to begin work the next morning, and Knickerbocker mentioned that a meeting was already scheduled for the next night.

He announced the members of the committee as follows:

We are wondering how an agenda for a NOTICE OF SPECIAL MEETING for Wednesday, January 8, 2020, was submitted by the Fire Apparatus Committee to the Bethel Town Clerk and time stamped at 4:08pm on January 7, 2020, when the Fire Apparatus Committee did not exist yet, had no officers or agenda, and was not voted on or approved by the Board of Selectmen yet until sometime during the 6:00pm BOS Special Meeting on January 7, 2020? Is this following a new protocol?

Nonetheless, the first meeting of the “Fire Apparatus Committee” was held on January 8, 2019 at 6:00 p.m. in the CJH Municipal Center, Meeting Rm. A (see video here). The agenda included “Public Comments, Correspondence, Elections of Officers, Consideration of dates for regular meetings, and Consideration of bid opportunity for fire truck.”

Szatkowski asked Murphy, “What are we going to do in the meantime?” Murphy answered, “Use mutual aid.”

On average, mutual aid adds a precious 10 minutes to arrive at a Bethel mutual aid fire call and could put lives in jeopardy, simple as that. Is this acceptable to citizens for at least another year? Or to spend an extra half million on a used vehicle that has an unknown history and might also put lives in jeopardy due to unknown past mechanical problems?

Murphy said tp the BOS, “I understand you have an ad-hoc committee and I would highly encourage them, if this truck [Bedford Hills truck] in fact does not meet new standards, I would highly encourage this board and that ad-hoc committee to look to the purchase of a new aerial tower for the Town of Bethel so that we could continue to move forward into the 21st century.”

The BOS was not open to discussing why they continue to delay this purchase and leave citizens at risk.

A Special Meeting of the new “Fire Apparatus Committee” is January 11, 2020, 9:00am, at the Bethel Fire & EMS Fire Department at 36 South Street, Bethel, CT, to discuss and inspect fire apparatus. View agenda below.

Other items discussed at the BOS Special Meeting Jan. 7th:

Consideration of 77 South St.:
Mike Kozlowski and Christopher Campanaro owners of 77 South St. discussed their plans for the building and request for Bethel to submit the application to MTA for occupation of land needed for a sidewalk.
Discussion ensued. Selectman Straiton made a motion, which was seconded by Selectman Szatkowski that the town would accept responsibility to apply for a sidewalk with MTA and pay the application fee of 1, 100.00 to be fully reimbursed by Mike Kozlowski and Christopher Campanaro. Vote, all in favor, motion approved unanimously.

Consideration of date for special town meeting and referendum:
Will be decided in future meetings Consideration of date for the Public Hearing, Annual Town Budget Meeting and the referendum for
the 2020 budget: First Selectman Knickerbocker made a motion to hold the Annual Town Meeting on April 6, 2020. Vote, all in favor, motion approved unanimously. He also announced the dates for the Public Hearing: March 23, 2020 and the Referendum: April 21, 2020.

Consideration of appointment to boards:
First Selectman Knickerbocker made a motion to approve appointments for the following boards and commissions, and were unanimously approved:

Library Board of Directors:

LIVES AT STAKE? South Street Bethel Fire & EMS Operating Without a Working Ladder Truck & Board of Selectmen Are Not Expediting or Approving Immediate Replacement

Above: Mike Kozlowski and Christopher Campanaro, owners of 77 South St., discussed their plans for the building and request for Bethel to submit the application to MTA for occupation of land needed for a sidewalk.