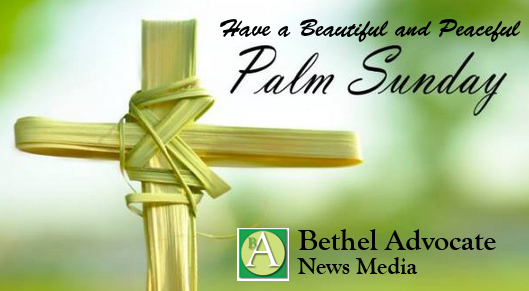 Bethel Advocate Wishes You a Beautiful and Peaceful Palm Sunday 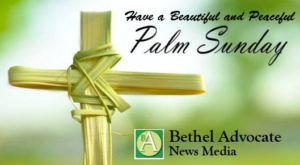 Bethel Advocate Wishes You a Beautiful and Peaceful Palm Sunday

Palm Sunday is the final Sunday of Lent, the beginning of Holy Week, and commemorates the triumphant arrival of Christ in Jerusalem, days before he was crucified.

Palm Sunday is known as such because the faithful will often receive palm fronds which they use to participate in the reenactment of Christ’s arrival in Jerusalem. In the Gospels, Jesus entered Jerusalem riding a young donkey, and to the lavish praise of the townspeople who threw clothes, or possibly palms or small branches, in front of him as a sign of homage. This was a customary practice for people of great respect.

Palm branches are widely recognized symbol of peace and victory, hence their preferred use on Palm Sunday.

The use of a donkey instead of a horse is highly symbolic, it represents the humble arrival of someone in peace, as opposed to arriving on a steed in war.

A week later, Christ would rise from the dead on the first Easter.

During Palm Sunday Mass, palms are distributed to parishioners who carry them in a ritual procession into church. The palms are blessed and many people will fashion them into small crosses or other items of personal devotion. These may be returned to the church, or kept for the year.

Because the palms are blessed, they may not be discarded as trash. Instead, they are appropriately gathered at the church and incinerated to create the ashes that will be used in the follow year’s Ash Wednesday observance.

The colors of the Mass on Palm Sunday are red and white, symbolizing the redemption in blood that Christ paid for the world.