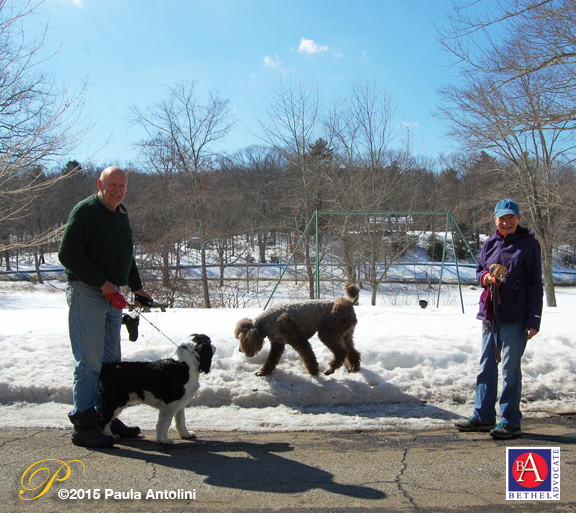 Many dog walkers were seen in Putnam Park in Redding CT yesterday. 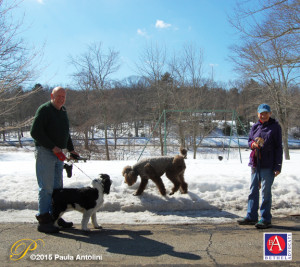 Photo above: (left) Patrick Garrard with his dog Farley, and (right) Sandra Perce with her dog Coco, on March 9, 2015. (Click on photo to view larger.)

After many weeks of temperatures in the low teens and then negative digits, along with snow many days, as temperatures went into the 40’s yesterday it felt like Spring was near.

Many dog walkers were seen in Putnam Park in Redding CT yesterday, walking the path around the park, despite the ice and snow still remaining. Putnam Park is located right over the southern border of Bethel, off Route 58. 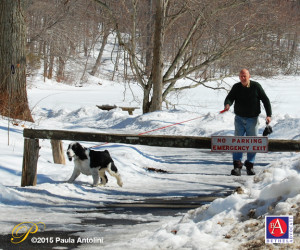 Photo above: Patrick Garrard exits the path with his dog Farley, in Putnam park, Redding, CT, on March 9, 2015. (Click on photo to view larger.)

Garrard said that the paths were still pretty icy, as he came out of the woods after walking the path around the park.

Perce was smiling and appeared to be enjoying the sunshine and fresh air and her well-behaved dog remained close despite no leash.

Weather is expected to be mostly sunny this week with a high temperature of 54 degrees. Let us all hope Spring will arrive soon. The snow IS melting! Be sure to watch for falling ice and snow from buildings.