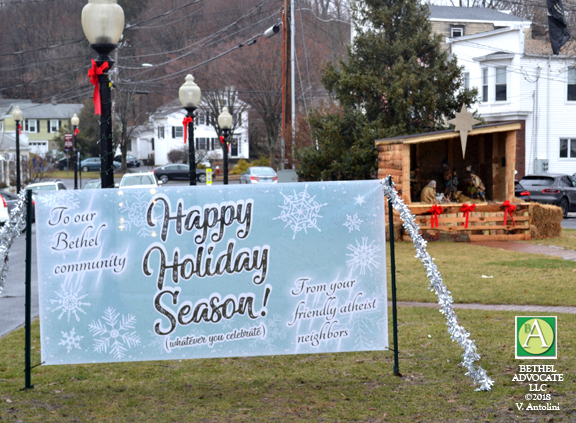 This morning, Sunday, December 16, 2018, the first-ever 8-foot by 4-foot Atheist sign was installed in P.T. Barnum square in Bethel, Connecticut. It reads, “To our Bethel community Happy Holiday Season! (whatever you celebrate). From your friendly atheist neighbors.”

After two public hearings in the last few weeks, in which the Atheist sign applicant James Naddeo chose only to read a prepared statement at the second hearing, and not speak at the first hearing, the sign was approved by the Bethel Board of Selectmen (BOS) in a 2-1 vote, with First Selectman Matt Knickerbocker and Selectman Richard Straiton voting yes, and Selectman Paul Szatkowski voting no.

There were other options to solve this controversy but the BOS chose not to consider them. One offer was made by Perri Anastasakis, owner of the  Famous Pizza Restaurant which borders P.T. Barnum Square, to move the Nativity display to his family property which is approximately 50 feet from where the Nativity Scene now stands, also bordering the Square.

When First Selectman Matt Knickerbocker was asked, at the end of the second hearing on December 4, 2018, after the vote was final, why he did not consider this option to move the Nativity, he said, “He never called us.” (meaning Mr. Anastasakis). Then Knickerbocker added, “We are not supposed to go go chasing people.”

Letter were received from residents, mostly against allowing the sign. Read letters here.