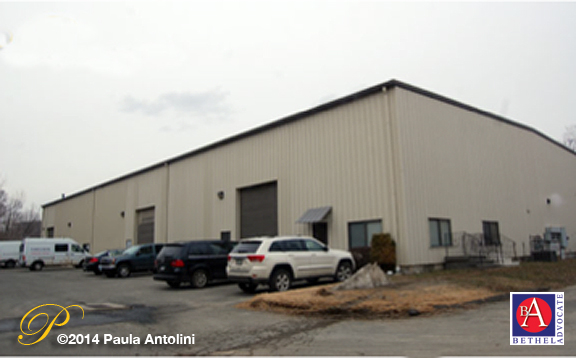 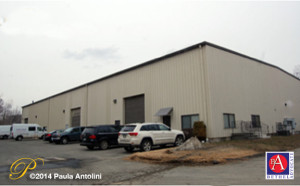 Photo above: Mono-crete Step Co. LLC, a cement products business, owned by B. Shawn McLoughlin, the crematorium applicant, located at 12 Trowbridge Drive in Clarke Business Park in Bethel CT.  He wants to put the 5,000sf crematorium building in the northwest corner of the same property.

The Bethel crematorium controversy has grown in complexity from early last year, when the text amendment application was first submitted, then subsequently the building permit application and permit to use the structure as a crematorium after that. However, the number of business owners and residents has grown too, who oppose this plan completely.

Here is a recap (rough summary) of what transpired in the last year regarding the crematorium, but it does not include all testimony, due to space here.  (You can obtain audio tapes of the public hearings from the Planning & Zoning office in the Clifford J. Hurgin Municipal Center on 1 School Street in Bethel. CT.)

2) The Bethel Economic Development Committee (EDC) Chairman Mike Boyle stated that they opposed the crematorium, saying it was “not in the best interest of the park.” In 2014 there were two public hearings, to address some park rules changes the EDC had proposed. This included not allowing a crematorium in the park, and other rules changes that addressed storing chemicals in the park, and other visual issues such as screening etc..

Three members of the P&Z, Chairman Pat Rist, Kitty Grant and Bob Legnard, appeared at the EDC meetings arguing who had authority over making park rules. (Note: All three members had previously voted, as P&Z commission members, to approve the text amendment to allow a crematorium in the Bethel IP zone.)

The EDC had been stewards of the park successfully for 30 years without incident. This P&Z opposition to EDC decisions occurred right after the P&Z had approved the text amendment to allow a crematorium in the IP zone (so, more locations than just the Clarke Business Park could allow a crematorium) and the EDC changed the park rules to oppose that amendment. The EDC closed the meeting with the rules standing.

3) Next there was a “Special Town Meeting” set up to vote on the tenure of the EDC, to extend their stewardship another ten years. The meeting was held on the Monday between the Christmas and New Year’s holidays, and many residents were unaware of the meeting, whose notice was not prominent. At this meeting First Selectman Matt Knickerbocker announced the vote was to be specifically ONLY on the EDC tenure, but apparently there was so much controversy by that point on so many issues, people might not have been voting on the tenure alone.

Before the vote, the EDC offered to hold another public meeting in January 2015 to discuss the park rules once more, but that meeting never took place because the EDC’s power was voted down.

At the the poorly attended “Special Town Meeting” the power of the EDC was stripped by a 2 vote margin (28 to 26) then the rules of the park expired on January 15, 2015, so there are no park rules, other than zoning regulations.

When First Selectman Knickerbocker was interviewed after that meeting, and he was asked “Who is in charge of the park or rules now?” he said “there are no rules” and that the P&Z is handling issues for the Clarke Business Park now.

See video of that interview here:

4) The P&Z then did a site walk of the proposed location of the crematorium, on the same property as Mono-crete Step Co. LLC, which took place soon after the EDC was stripped of power.

It was eventually discovered that owner McLoughlin had some violations on his Mono-crete Step Co. LLC property, so his application for the crematorium could not proceed forward and was temporarily withdrawn by the applicant. The violations were that the town discovered that owner McLoughlin did not have a Certificate of Occupancy for Mono-crete Step Co. LLC for the last 15 years that he owned the business. Also, the some of the present conditions on the property did not conform to the original approved site plan due to modifications that were made. Read story here: https://betheladvocate.com/crematorium-applicant-hits-snag-with-application-has-permit-problems/

5) McLoughlin was able to obtain a Certificate of Occupancy fairly quickly after making the necessary site plan corrections. We are not sure if there were any penalties involved.

6) McLoughlin then submitted another site plan for a building permit and crematory permit application to the P&Z.

7) Several public hearings have been held in which much opposition from residents and business owners has been shown verbally and in letters written to the P&Z commission.

The crematorium topic was eventually split into two different public hearings. One set of public hearings for the moratorium and text amendment that was requested by Greg Marciano, owner of CT Coining at 10 Trowbridge Drive, the business next door to the proposed crematorium location, which is 45 feet from his property line.  Marciano  hired attorney Neil Marcus to present his case to the P&Z.  Another public hearing is for the building site plan permit, and a permit to use the structure as a crematorium. Public hearing is this Tuesday, May 12, 2015, at 7:00 p.m. in Room D at the Clifford J. Hurgin Municipal Center, 1 School Street, Bethel CT.

8) Attorney Peter Olsen, representing the crematorium applicant B. Shawn McLoughlin, and attorney Neil Marcus, representing Greg Marciano, owner of CT Coining,  presented their testimony at the public hearings for the moratorium and text amendment change requested by Marciano, and now that meeting is closed and the P&Z will decide to approve or not approve these permits.

9) Regarding the other ongoing topic (tomorrow’s meeting) about the the crematorium building site plan permit, and a permit to use the structure as a crematorium, this concerns many different aspects about land use rules, town and state regulations, regarding the actual plans submitted.

Attorney Olsen, representing the crematorium  applicant, argued that only the part of the building that is being used for a crematorium, the area where the retorts (ovens) are, should be considered when measuring distances required in regulations, from the crematorium retort areas to homes.  Attorney Neil Marcus, representing CT Coining/Marciano, said in all his years of being an attorney he has never heard of “part” of a building being consider as the business.

Marcus also found issues with the site plan from the applicant that were in direct violation to the P&Z’s own regulations, such as a retaining wall that is 13 feet high, and anything over 8 feet is considered a building, he told the P&Z during testimony at a pubic hearing.

There is also an issue of two other applications required by the state, from the crematorium applicant, one from the CT Department of Energy and Environmental Protection (DEEP) and one from the Department of Public Health (DPH), regarding safety approvals. Attorney for the applicant, Olsen, flatly stated they are not submitting these two applications until the P&Z approves their building permit application and permit to use that structure as a crematorium, FIRST, and that “approvals are final” he said. Olsen said at the public hearing in the testimony, if the P&Z wanted to “risk” that.

10) The Bethel Health Department (BHD) had issued a lengthy letter to the P&Z, and it mentioned these two applications (DEEP and DPH) but it was unclear where the BHD stood if these applications were not submitted by the applicant and approved by the DEEP and DPH, and the P&Z approved the site plan and crematory permits beforehand…or can they?  Why would the P&Z want to approve building and crematory permits without the safety permits approved by the DEEP and the DPH first?

Bethel Advocate approached the Bethel Health Department three times in the last two weeks, in person, and we still have not received an answer regarding the question about these two required applications.

11)  A Protest rally took place on Saturday, May 9, 2015, attended by residents and Edward Kim and son, owner of Skyzone, a business in Clarke Park who is opposed the the crematorium, and other residents.  That story is upcoming shortly, with photos.

12) This leads us to tomorrow’s public hearing:

At tomorrow’s Planning & Zoning Commission (P&Z) hearing, your voice can be heard about the crematorium and you can hear what others have to say, including residents, business owners, attorneys and the commission, and you can ask questions.  The topic is the proposed crematorium building site permit, and a permit to use the building as a crematorium.

14) Many businesses are likely to be affected negatively, in many ways, by the  proposed crematorium.  Many business owners are already selling their properties even before the crematorium is approved.  (Letters and other info. detailing this will be in another upcoming story.)

15) The Economic Development Committee (EDC) was opposed to the crematorium from the start, as Chairman Mike Boyle said then, and has stated again in recent letters to the P&Z recently.

The Director of Economic Development Janice Chrzescijanek, was also opposed to the crematorium, and has also written a letters to the P&Z.

Boyle and Chrzescijanek have attended some of the recent P&Z public hearings too, in opposition.

Bethel Advocate will update this story as it develops.