A Little Rescue Goes a Long Way When Citizens Gather and Stand Together Behind a Cause.  Sometimes it’s the little things that matter in life, and the caring actions of many, that just make a pleasant difference on our world. 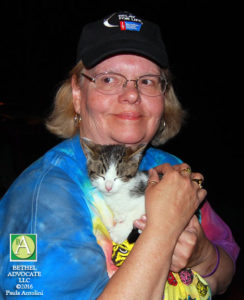 Photo above: Teresa Fogel holds first kitten that was rescued. (Click on all photos to view larger.)

Sometimes it’s the little things that matter in life, and the caring actions of many, that just make a pleasant difference on our world.

In this case, it was four tiny little kittens that “took a village” to capture when a local man (address not released) later identified as John Rountos, decided to dump four kittens and and a mother cat in the woods without food, water or shelter, behind a local Bethel business one afternoon.  He did this thinking it was helping these cats eventually find a home, he later said.  Many citizens, once they heard about his actions, disagreed, and thought it was wrong to abandon live animals, and especially little kittens in this manner, and it is in fact, against Connecticut state law.  They did not feel these were feral cats as Rountos claimed.

It was an average day in Bethel Connecticut when business owner Bob Craybas spotted something suspicious as he was driving into the parking lot behind his Gift Cottage store at 154 Greenwood Avenue on May 10, 2016.  Craybas owns the Gift Cottage with his parents Larry and Joan Craybas and his sister Terri Craybas, who also became concerned about the kittens once they became aware of the situation. 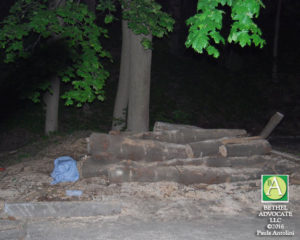 Photo above:  Woods behind the Gift Cottage showing the trap (covered in blue cloth) placed there by Teresa Fogel, in the area near the logs where the kittens and mother cat were released by John Rountos in the rear of the parking lot behind the store.

Bob Craybas saw a van parked towards the back of the lot, he said, and he thought at first perhaps the driver was stealing some logs that were back there.  But upon pulling up beside Rountos’ van he suddenly saw kittens running into the woods from under the Rountos van.

Craybas questioned Rountos about releasing the kittens and Rountos denied letting kittens loose until Craybas spotted a cat carrier in the van and pointed it out to Rountos.  Craybas also decided to take a photograph of the van’s license plate.  Only then did Rountos admit to letting the cats loose, claiming he had gone to a cat rescue shelter previously and they refused to take the animals.  Craybas asked him to name the shelter and the man could not.  Rountos claimed they were feral cats, Craybas said.  Rountos then said to Craybas “Let’s talk about this,”  Craybas replied, “You are dumping cats.”

Craybas called police and stood there with Rountos until police arrived.

According to a Bethel Police report, at approximately 1:00 p.m. on May 10, 2016, Bethel Animal Control Officer Steven Shanley was dispatched to investigate someone releasing three cats at the complainant’s business.

According to the report: “The officer made contact with Rountos who was still in the parking lot.  Rountos stated to this officer that he trapped the three cats in an attempt to give them to a cat rescue organization but was unsuccessful in doing so.  He felt the center of Bethel was a safe area for them to live away from the coyotes on his property.  He thought they possibly may find themselves a new home in the area. Rountos further stated he regretted releasing them and realized afterwards it was not in the animals’ best interest.”

According to the report, Officer Shanley said, “I explained to Rountos that by releasing the cats he violated Connecticut’s Animal Cruelty statute by not providing them with proper care, and abandonment. Rountos understood the law and stated he will not trap or release any more feral cats.  Since the cats were feral I issued a verbal warning for Cruelty to Animals 53-247(a).”  … “This officer followed up with Craybas to inform him if the cats return to his property and cause a nuisance to contact animal control.  CASE CLOSED,” the report reads.

The Connecticut State Statute for Cruelty to Animals CGS § 53-247(a) prohibits people from overdriving, overloading, overworking, torturing, depriving of substance, mutilating, cruelly beating or killing, or unjustifiably injuring any animal. If impounding or confining an animal, it prohibits (1) failing to provide it proper care; (2) neglecting to cage or restrain it from injuring itself or another animal; or (3) failing to supply it with wholesome air, food, and water. The statute also bans unjustifiably administering or exposing a domestic animal to any poisonous or noxious drug or substance intending that the animal will take it. Individuals in custody of an animal may not act cruelly to it; fail to provide it with proper food, drink, or shelter; abandon it; or carry or cause it to be carried in a cruel manner. Fighting with or baiting, harassing, or worrying an animal to make it perform for amusement, diversion, or exhibition is also prohibited. These offenses are punishable by a fine of up to $1,000, imprisonment of up to one year, or both.

After Officer Shanley left there was still the case of the four kittens and one mother cat on the loose.  Terri Craybas and her family were so concerned someone might accidentally run over a kitten in the parking lot, should the cats suddenly dart out of the woods, that she posted this message on Facebook: “Someone dropped 3 kittens in our back parking lot…we were able to catch one (was hiding in wheel well of a car in the lot) but two others are missing…a black one and a white/gray one) We put food out and people from several businesses keep checking but please be careful if you’re parking in the back … I’m sure they’re terrified.” 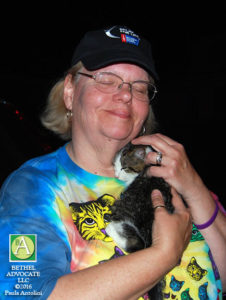 Photo above: Teresa Fogel cuddles first cat that was rescued.

Bethel resident and animal lover Teresa Fogel, who is also a Bethel Community Emergency Response Team (CERT) Coordinator, Bethel’s Connecticut State Animal Response Team (CTSART) Leader, Red Cross volunteer, and Relay For Life volunteer, saw the online post by Terri Craybas and drove to the location behind the store to try and find the cats.  She then took action and drove to the Danbury Animal Welfare Society (DAWS) on Grassy Plain Street and obtained a trap (does not hurt animal, just captures them) and brought it back to the location where the cats were last seen.  She paid $75 deposit to do so, and was responsible for the trap should someone steal or damage it.

By now neighbors who live near the Gift Cottage also heard about the missing cats and started checking the woods and trap often.  Fogel also drove back many times to check too, and eventually by the second day was losing hope that the young kittens were alive without food, she said.

Bob Craybas felt the need to warn some drivers in the Gift Cottage parking lot to be careful when they moved their cars for fear a kitten might be in the area, and sure enough, when one woman started her car a kitten ran out from the wheel well.  That kitten was eventually captured by hand in the front yard of the store, by a neighbor, who also became involved in the search, along with many of her family members who kept monitoring the woods too, looking for the cats for two more days.

Besides the four Craybas family members and Teresa Fogel helping to rescue the cats, neighbors that kindly helped were Bethel residents Nathaniel Ramirez and his cousin Tiffany Zapata, and Tiffany’s mother Terry Zapata, and Maya Fonseca who was visiting from Danbury. 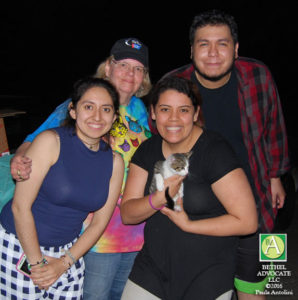 Photo above: Teresa Fogel (upper left) with some of the neighbors who helped with the rescue, Nathaniel Ramirez (upper right), Tiffany Zapata and Maya Fonseca.

The other three kittens were eventually caught in the trap but the mother cat is still loose and has not been seen again so far.

One neighbor ended up keeping one kitten and the other three kittens went home with Fogel overnight, sleeping in a portable kennel cage, and she brought them to DAWS in the morning. 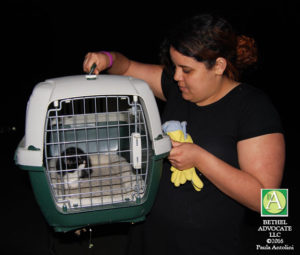 Photo above:  The second kitten that was rescued is shown in a portable carrier.

We asked Officer Shanley why John Rountos was not summoned and Shanley said, “Just to let you know, the cats are now with a rescue organization, they have them in their care.  As for why the gentleman wasn’t summoned, used a little discretion, he’s an older gentleman, he thinks he was doing the right thing by getting them out of the area where he lived and to a more urban area, and I see that the cats were caught, which they were now, you know, so we’re not going to issue a summons.  That’s why he was warned.”

Had a number of people not sprung into immediate action the outcome would likely have been grim for these little ones.  The diligence of Fogel kept the search going, she just would not give up until the kittens were found.

It took a lot of concerned citizens all working together for days to rescue these kittens but this story had a happy ending.   They are hoping the mother cat was taken in.  If you have the mother cat please let us know, and thank you for rescuing her.

Please know: if you have or find animals that you do not wish to keep, there are many rescue organizations in our area willing to accept the animals and you can also contact animal control officers in every town, or local police.  Do not abandon animals.

Thank you to all these kind citizens who decided to take action. 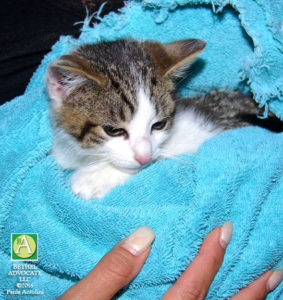