A rally organized by the Newtown Action Alliance was held on Thursday, March 28, 2013, in front of the National Shooting Sports Foundation (NSSF) headquarters in Newtown Connecticut. More than 100 demonstrators were participated.

Click here to view VIDEOS of this event and more PHOTOS. 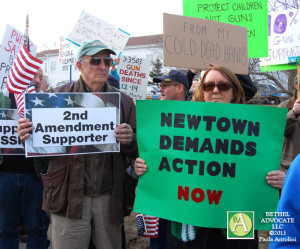 GUNS: A Peaceful Newtown Protest Rally and an Interview with a Newtown Family Whose Children Were in the Sandy Hook School on 12/14

A rally organized by the Newtown Action Alliance was held on Thursday, March 28, 2013, in front of the National Shooting Sports Foundation (NSSF) headquarters in Newtown Connecticut. Protesters from both sides of the gun law issue were present, standing curbside, gun reform supporters on one side and many NRA members and supporters of the NSSF on the other.  More than 100 demonstrators were participated, waving banners, flags and signs and urging passing cars to “Honk for Gun Law Reform” as one protester’s sign read.

At the rally I spoke to Newtown residents Erin and Eric Milgram, who had their daughter Lauren and son Dalton with them and all four family members were holding signs. Mrs. Milgram said, “They were both in the school that day.” Lauren is in first grade and Dalton is in fourth grade at Sandy Hook Elementary school, she said.  Mrs. Milgram was referring to the 12-14-12 school shooting where Adam Lanza killed 20 students and six staff members.

I had Mrs. Migram’s permission to speak to her daughter and I asked first grader Lauren why she was there at the rally.  Lauren said, “To make people stop using guns.”

I then asked the parents “How are Mom and Dad doing? and Mr. Milgram replied, “I’m energized to see this kind of support out here…because I’ve seen a lot of support on the other side, so I’m amazed… and you know, I just couldn’t sit back anymore and let other people carry this torch.  I said, we have to get out here and do what we can, and I’m very very happy with the turn out I see here.”

Question: “You are carrying a sign that says “Why No Background Checks?”….have you been following that?”

Mr. Milgram:  “I have.  I think that what President Obama has proposed has been, you know, very sensible legislative changes that would help to save lives.”

Question: What in particular?

Mr. Milgram: “I think reducing magazine capacity will save lives and will not endanger people.  The average number of shots fired in a typical self defense situation is two, and 95% of the cases it’s four or less.  Ten rounds is plenty for self defense, to treat most self defense situations.  When someone can enter a school, shoot their way in, in five minutes, and kill twenty children and six adults, who can really say that that’s okay, you know, that we don’t need to change, that things are fine the way they are, that it’s rare? It’s not rare.”

Question: “What would you say to the people who feel they should have the same fire power as the criminals?”

Mr. Milgram: “Every freedom comes with limitations.  I can’t go into a theater and yell fire. Is my right to free speech infringed, my first amendment rights?  No.  There are certain things in society that the government’s already proven and the Supreme Court’s agreed that we can put restrictions on fire arms.  I can’t easily go and buy a true fully automatic rifle, I can’t own explosives, or grenade launchers and so forth.  I can’t have a bazooka in my house.  Even if I could afford a predator drone,  I could not legally buy one.  We already put restrictions on things so people that think they are holding out against the government, that’s just paranoia.”

Question: “Some of the things you mentioned I think are unlawful already, so where would you draw the line on weapons?”

Mr. Milgram: “Background checks for everybody. I’ve actually purchased weapons at gun shows with no background check whatsoever.  No ID.”

Question: “Are you a hunter?”

As for the other viewpoint of the gun issue, I contacted the National Shooting Sports Foundation and spoke to NSSF Director of Public Affairs Michael Bazinet and he said they preferred to issue a statement to the media rather than answer my individual questions.

Their statement is as follows:

“We respect the rights of all citizens under our First Amendment to express their opinions in public.  We all share the goal of wanting to help make Connecticut safer for our children and all our citizens. That is why we have been speaking with legislators to promote practical measures that will effectively address the central issue of keeping firearms out of the hands of those who should not have access to them.”

The rally began at approximately 4:30 p.m. broke up at about 5:45 p.m. when the anti-gun advocates left first, all at once in a group, quietly walking up the hill carrying their signs to go home.  The pro-gun advocates then slowly dispersed and the event was over by 6:00 p.m.