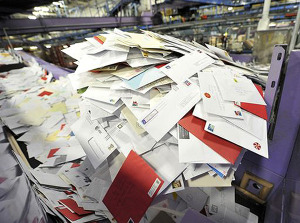 *****
Senator Murphy will be joined by postal workers tomorrow, to call for one year moratorium on USPS plans to close postal facilities.

WALLINGFORD — Tomorrow, U.S. Senator Chris Murphy (D-Conn.) will be joined by U.S. Postal Service (USPS) letter carriers, the President of the Connecticut American Postal Workers Union, the President of the Connecticut Letter Carriers of America, and concerned citizens to call for a one-year moratorium on plans by the USPS to close mail processing plants and slow first-class delivery. During the press conference, Murphy will highlight how the Postmaster General’s proposed closure of 82 mail processing plants, elimination of up to 15,000 jobs, and slowed mail service would have a detrimental impact on Connecticut’s economy and local communities. In Connecticut, the jobs of more than 370 USPS employees would be impacted across Wallingford and Stamford, and the delivery of first-class mail would be slowed.

Last month, Murphy sent a letter to the USPS’s Deputy Postmaster General expressing his concern over the proposed closings of Area Mail Processing Centers and other Connecticut facilities. More recently, Murphy was joined by 49 other U.S. Senators in sending a letter to leaders of the U.S. Senate Appropriations Committee to include a ban on mail delivery cuts as part of omnibus appropriations legislation or a continuing resolution that will fund government operations for Fiscal Year 2015.