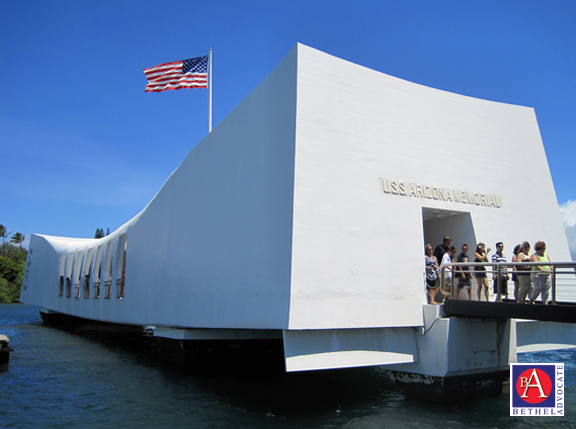 Pearl Harbor Memorial Bridge in New Haven Will Be Illuminated in Red, White and Blue Lights on the Nights of December 6 and 7

(HARTFORD, CT) – Governor Dannel P. Malloy today announced that he is directing U.S. and State of Connecticut flags to remain flying at half-staff on Friday, December 7, 2018, in recognition of National Pearl Harbor Remembrance Day. The national observation honors the lives lost in the attack on Pearl Harbor in 1941.

Flags are also currently flying at half-staff for a 30-day period in honor of President George H.W. Bush, who passed away on November 30. They should remain lowered throughout the duration of this period.

In addition, the Governor announced that the Pearl Harbor Memorial Bridge in New Haven – informally known as the Q Bridge – will be illuminated in red, white, and blue lights on the evenings of Thursday, December 6 and Friday, December 7, in observation of the remembrance. Beacons will project light upward from the bridge towers during those nights from sunset until 1:00 a.m. The bridge is named in honor of those who served during the attack on Pearl Harbor.

Governor Malloy said, “On this day we pause to recognize the members of the military and civilians – totaling over 2,400 – who lost their lives in the tragic attack on Pearl Harbor in 1941, as well as the many men and women who courageously responded to the call of duty and served our country during World War II. The battle was one of the darkest days in American history, and we must do everything we can to honor those whose lives were cut all too short. This day of remembrance is also a time for us to reflect on the thousands of American service men and women who are stationed around the world on behalf of our nation. Let’s recommit ourselves to honoring the sacrifices they make on behalf of the democracy and freedom that they fight to protect, and pray for their safe return home.”

Lt. Governor Nancy Wyman said, “Today marks 77 years since the devastating attack on Pearl Harbor, where thousands lost their lives in an unspeakable tragedy that brought the United States into World War II. We are forever grateful for the sacrifices of these brave men and women and all of the members of our military currently serving to protect our freedoms. The attack on Pearl Harbor was a dark moment in our country’s history, but as we so often do after tragedy, Americans came together to fight for democracy, justice, and humanity and ultimately win World War II. While we take time today to reflect on the sacrifices of the greatest generation, we must also remember the strength of our nation and our ability to overcome the most daunting challenges. God bless America.”